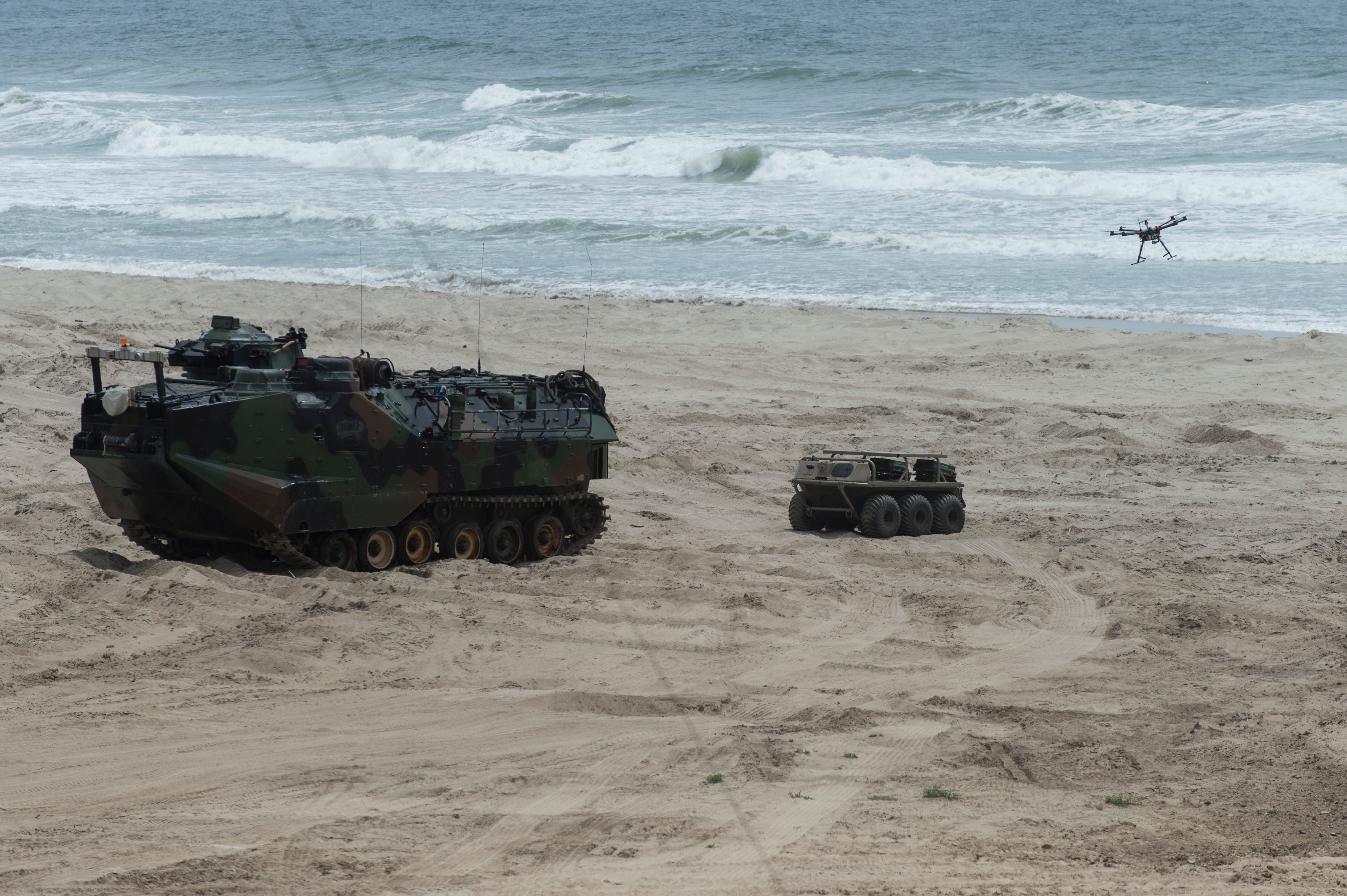 CAMP PENDLETON, Calif. – A 10-day exercise in experimentation that wrapped up Friday was all about speed – namely, getting advanced technologies into the hands of warfighting Marines operating with the Navy from the sea – and as soon as fiscally possible.

The “Ship-to-Shore Maneuver Exploration and Experimentation Advanced Naval Technological Exercise 2017,” which ran April 19-28 at the Camp Pendleton Marine Corps Base, tackled the challenges of forcible entry in the high-tech contested amphibious environment.

The overarching goal: Rapidly prototype and develop technology, equipment, gear and systems that will get Marines safely from ships and craft at sea to shore to accomplish the mission – and keep the military services ahead of formidable opponents, who are becoming equally matched in technology and cyber capability.

“If the first thing ashore or the first thing in a building is a Marine in the next contest, we will have failed. The machine ought to be the first one there,” said Brig. Gen. Julian Alford, commander of the Quantico, Va.-based Marine Corps Warfighting Laboratory-Futures Directorate. Same applies “in a dense urban environment.” Alford addressed the media Wednesday before a mock beach assault demonstration at Camp Pendleton’s Red Beach training area for senior leaders and industry representatives.

Since this sea-to-shore iteration of ANTX is about experimentation, most of the technologies demonstrated on the water or ground or displayed in tents and in the urban-training village huts aren’t programs of record. Some concepts remain untested and unproven. But the Marine Corps and the Navy are intent on meshing technology and ideas together and evaluating them much more quickly than traditionally done.

“I think this is the model,” Alford said. “More importantly than the model…, we’ve got to produce. We’ve got to drive four or five or six of these technologies into Bold Alligator. Next year’s Dawn Blitz has to get some. We’ve got to show industry this is worth doing, that we are good partners. We haven’t been great partners in the past.”

So drones that can swarm in the air or at sea and autonomously-driven vehicles were among dozens of unmanned technologies the Marine Corps and Navy are looking at to counter anti-access threats in sea-to-shore operations and close potential shortfalls in warfighting capabilities.

“The littoral battlespace is where the Marine Corps and the Navy operate. We have to be able to operate freely there, and the adversary will try to keep us out,” saud Lt. Gen. Robert Walsh[cqgf], deputy commandant for combat development and integration and head of Marine Corps Combat Development Command at Quantico, Va. “We want to have a lot of these capabilities out in front sensing – making sense of the environment – so we can act.” 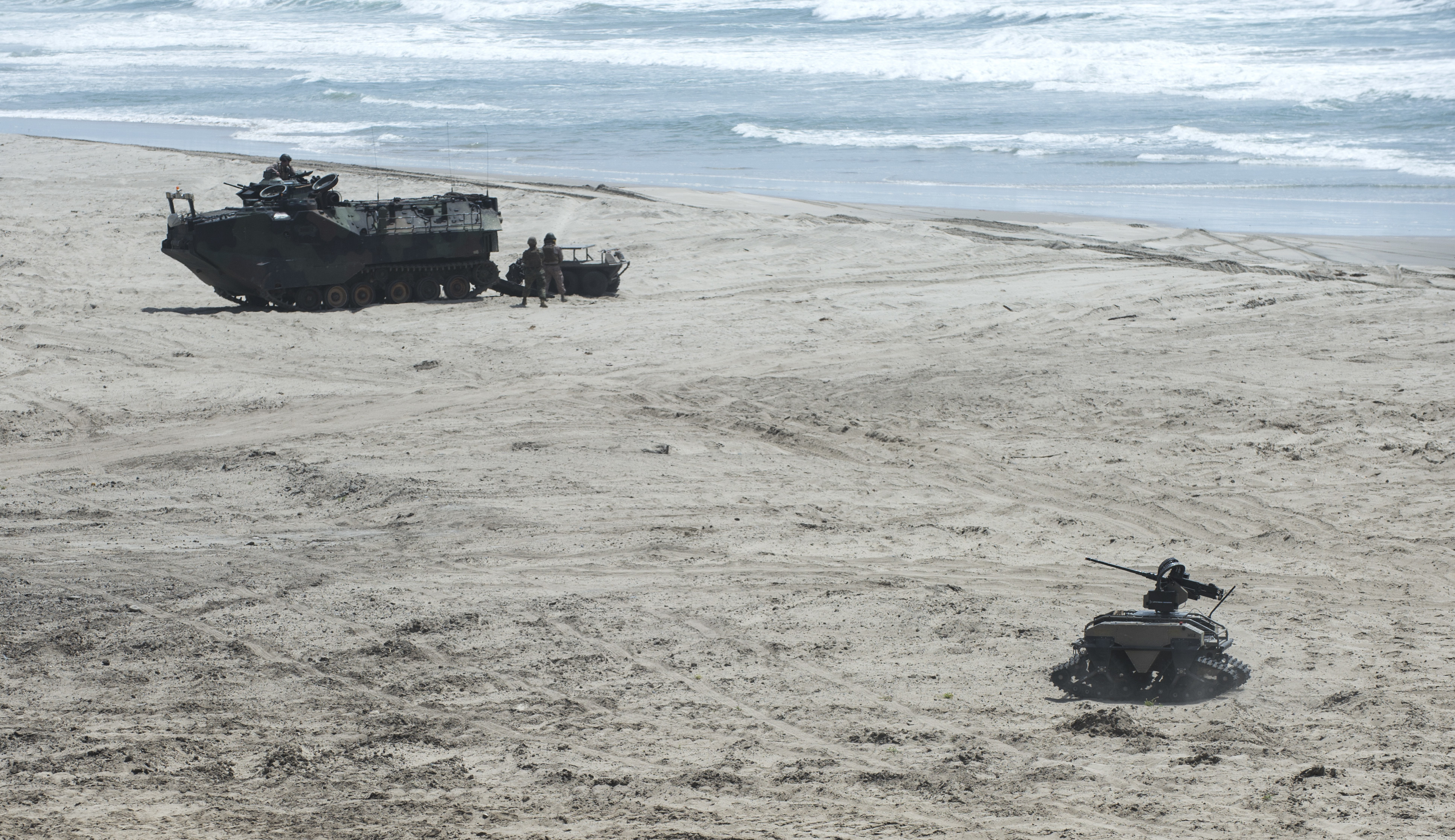 For this year’s ANTX, the Navy and Marine Corps demonstrated 50 of the 100 or so technologies and concepts culled from the services’ solicitation to industry and academia last October, and several dozen others on static display. The Marine Corps commandant, Gen. Robert Neller, a staunch advocate of shrinking that concept-to-reality timeline, and acting Navy Secretary Sean Stackley, acting secretary visited the site on Thursday.

The Wednesday demonstration picked up on a running condensed scenario, which began two weeks earlier during an Expeditionary Warrior tabletop exercise hosted by I Marine Expeditionary Force, involving an amphibious ready group and an embarked Marine air-ground task force operating over the horizon but expecting to encounter an opposition force with its own advanced weaponry, anti-access and cyber capabilities.

In the demo, reconnaissance Marines zipped ashore on jet boats after unmanned underwater systems had searched and cleared the beach and surf zone of mines. Several unmanned rigid inflatable boats and unmanned surface vehicles with sensors and jammers patrolled the offshore waters.

A wave of combat-loaded Amphibious Assault Vehicles and Light Armored Vehicles reached dry sand, with two AAVs arriving empty. Those amtracs – outfitted with existing, off-the-shelf, remote control – landed autonomously to demonstrate that an unmanned, driver-less technology would minimize or remove the human from initial entry when needed. Infantry Marines exited the amtracs, and some guided unmanned ground vehicles, including one equipped with a machinegun, to help reconnoiter the area. Others launched a Switchblade, a small unmanned air vehicle, from a tube to conduct area recon and surveillance. 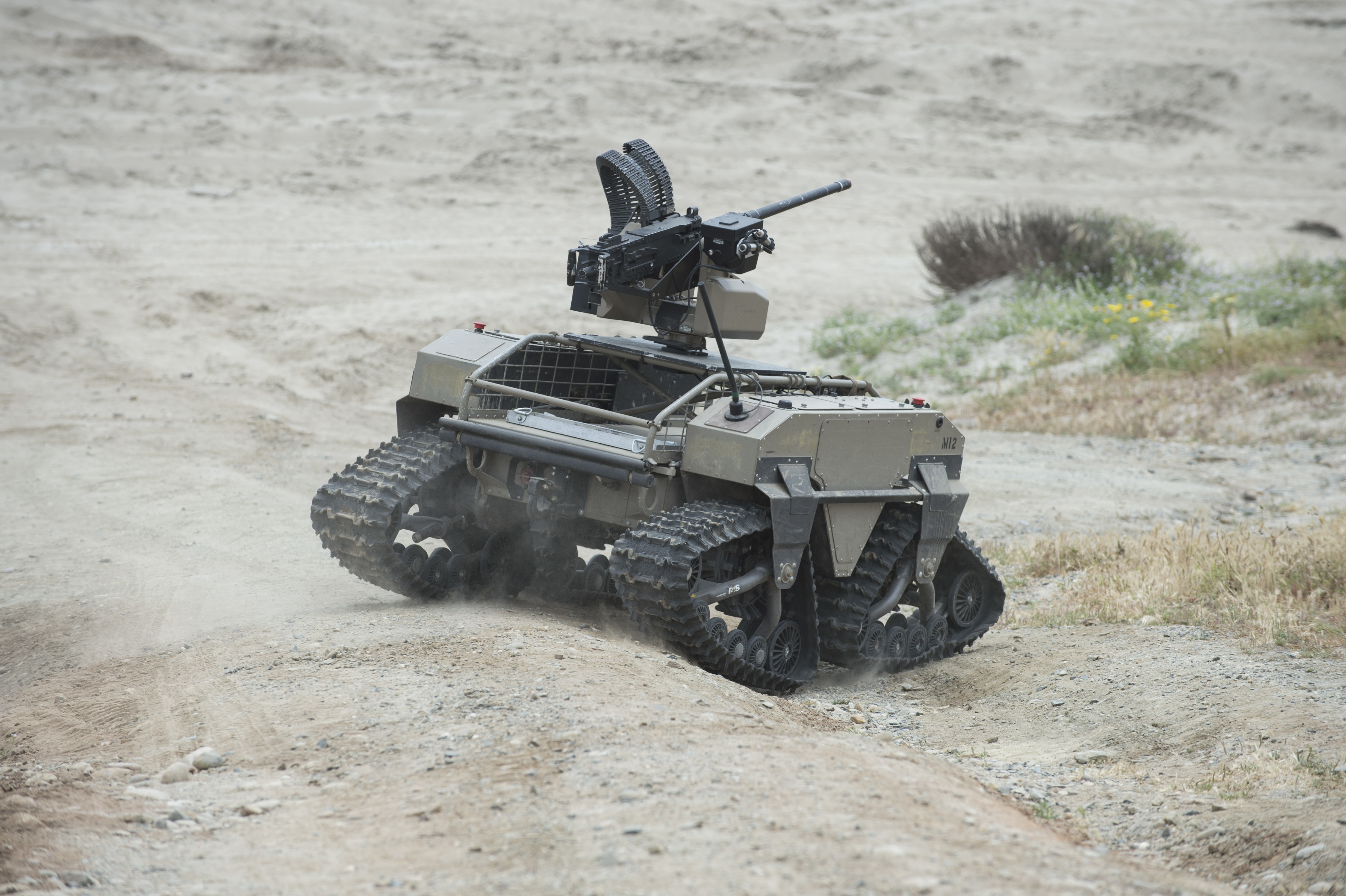 All throughout, drones in the air provided cover, their small sensors — with low signature emissions — providing commanders real-time imagery and information, which the landing force Marines also got on their small Android tablets and devices, officials said. Sky-high and out of view, one officer pointed out, a satellite-aided command and control. Above the beach, the Navy-developed Vapor 55 provided aerial command and control, linking Marines with other drones and systems on ship and ashore. A helicopter-looking unmanned air system One UAS called V-Bat hovered overhead with smaller quadcopters, providing a data link. Another quad-copter carried and then dropped a mock explosive device (a pair of meals-ready-to-eat packages) onto an enemy target.

Over the coming weeks, Marine Corps and Navy officials will take hard looks at the technologies and determine the next step. Some will be incorporated into upcoming Bold Alligator and Dawn Blitz exercises, although most of the technologies aren’t yet ready for prime time. Still, service officials say there’s little time to waste. “We are behind the curve when it comes to staying ahead of today’s threats,” Walsh said.

“Industry is moving much faster than what we are doing,” he said. Adversaries, whether nation-states or non-state actors, also are hunting for those same technologies to grab the advantage, so “we’ve got to go faster, and there are ways to go faster. That’s what we want to see here.”

But there’s there’s little rapid about military procurement. That’s the challenge that Marine Corps and Navy officials know they have to tackle if they want to get these in the hands of their commanders and warfighters and maintain air, surface and ground supremacy.

“We’ve got to do better, we’ve got to do faster,” John Burroughs, deputy assistant secretary of the Navy for research development, defense and acquisition, told journalists.

While Walsh noted the existing “byzantine” requirements of acquisition the services face, he remained optimistic. “We will find the money if we get to the right technology,” he said. “We have to change things.”

Meanwhile, the Marine Corps is pushing ahead with its ongoing future-MAGTF experimentation geared to its ground combat element, including small drones, energy-harvesting gear and integrated tablets provided to an infantry battalion – 3rd Battalion, 5th Marines, from Camp Pendleton – when they deploy to Japan this spring. The coming years will see similar experimentation and equipping of the logistics, command and aviation combat elements in 2018, 2019 and 2020, respectively, Alford said.