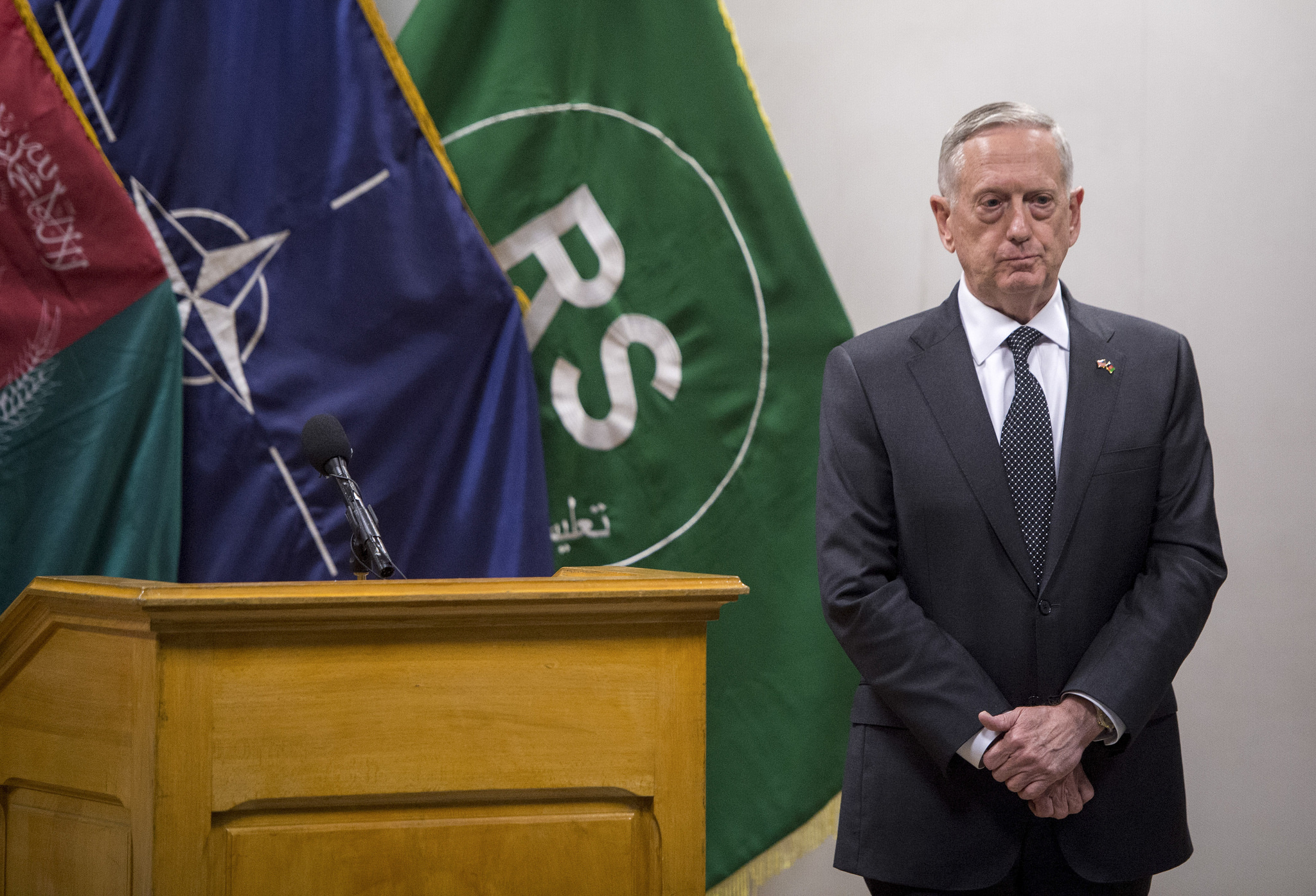 In the wake of a surprise attack that killed at least 160 Afghan soldiers last week, Defense Secretary James Mattis said “the fight is going to go on” against terrorism and not just in Afghanistan.

Speaking to reporters in Kabul Monday, Mattis said, the fight “is going to be far-flung, and that’s the nature of the fight.” He made those comments as the administration is reviewing its strategy for Afghanistan.

He added, “You saw what happened in Paris. You see the French troops engaged down in Africa. You find … the NATO-led for, a lot more than just NATO, here in Afghanistan. You see what’s going on against ISIS in Syria.”

The minister of defense Gen. Abdullah Habibi and Army chief of staff Gen. Qadam Shah Shahim resigned their posts in the wake of the single deadliest attack on Afghan forces in the long war against the Taliban. The Afghan government at the same time announced the replacement of four corps commanders, including the commander of the 209th Corps in Balkh Province where the attack by the Taliban or its close ally the Haqqani Network operating from Pakistan, took place.

That was only the latest large-scale attack by terrorists in Afghanistan.

The month before, fighters from the Islamic State laid siege to a military hospital in Kabul, the capital, that left 50 dead.

Mattis’ visit occurred as the administration has begun its review of American strategy. On the table during the review is a request from NATO commander Gen. John Nicholson for several thousand additional American soldiers. He made the request in response to large Taliban territorial gains in the last year.

There are now about 8,500 American service members in Afghanistan in advise, train and assist missions, including counterterrorism and air support. This number is down from the more than 100,000 serving there after a 2009 decision to increase the U.S. and NATO commitment to stabilize the military situation.

Speaking Monday at the Brookings Institution, a Washington, D.C., think tank, Hamdullah Mohib, Afghanistan’s ambassador to the United States, was quoted in news reports as saying as long as the Taliban “bring havoc” to the population, “we will fight back.”

He said 49,000 Afghans were killed or wounded in the fighting last year. The U.S. said nearly 11,500 of those were civilians, including children.

Mattis, in Kabul, said, “We’re under no illusions about the challenges associated with this mission. 2017 is going to be another tough year” for the Afghan and coalition security forces.

As matter stand now with the Taliban, there has been no movement toward peace talks. “They only need to renounce violence and reject terrorism. It’s a pretty low standard to join … the political process,” Mattis added.

“The level or barbarity and cruelty, shooting patients in bed, killing young soldiers at the mosque in prayer, they’re reaching new lows in terms of their behavior,” Nicholson said.

He added in answer to a question that he did not see the Taliban and the Islamic State-Khoristan [named for an Afghan province where it is operating from] working together. He said the Islamic State has been trying to move fighters from Syria to Afghanistan and Libya, in particular. “It should be very clear to ISIS [an acronym for the Islamic State] main, there is no space for them to come to in Afghanistan.”

On Moscow’s involvement in Afghanistan, Nicholson said, “We continue to get reports of this [weapons] assistance, and, of course, we had the overt legitimacy lent to the Taliban by the Russians. …That really occurred starting late last year.” He said “I’m not refuting that” the Russians are arming the Taliban.

“Arming belligerents or legitimizing belligerents who perpetuate attacks like we saw two days ago in Mazar-e Sharif is not the best way forward to a peaceful reconciliation.”