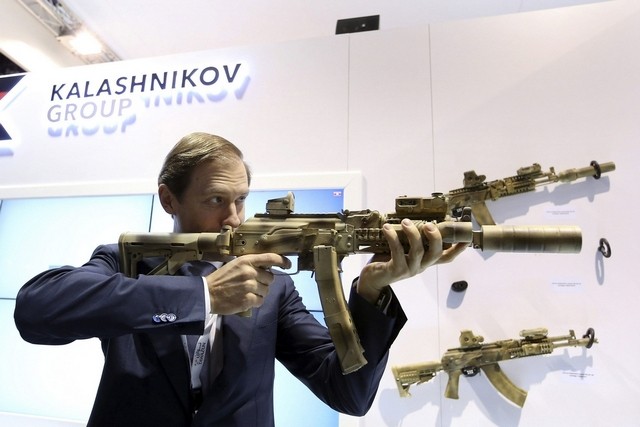 While Russia remains a major international arms exporter, the Kremlin has seen its sales have fallen flat in recent years largely because its largest markets — China and India — have built up their own defense industries and can do the work themselves at a lower cost.

But changes to Russia’s export market does not mean Moscow is slowing down its own military modernization efforts. In fact, the domestic demand for new and better equipment is straining its supply capacity, which is also affecting foreign sales, an expert on Kremlin defense industry said Monday.

Speaking at the Center for Strategic and International Studies, a Washington, D.C., think tank, Sergey Denisentsev said, “The domestic market will be the main priority for Russian defense industry” at least through 2019.

The visiting fellow at CSIS who is affiliated with the Moscow-based Center for Analysis and Technology added India still account for about 31 percent of Russia’s arm sales and China about 22 percent. The original reasons for the strong sales to New Delhi and Beijing came from international sanctions imposed on India for its nuclear weapons testing in the late 1990s and Russia’s willingness to sell to Beijing after China crushed the pro-democracy demonstrations in Tiananmen Square in 1989.

“Another factor in these sales was Russia’s willingness to [accept] technology transfer” in arms sales agreements with these two nations.

“Chinese orders in the 90s helped Russian industry survive” after the collapse of the Soviet Union, he added in answer to a question. “Now China is completely different,” able to produce its own destroyers, submarines and aircraft carriers. “India is going on the same track.”

Yet the advances Moscow is making in a fifth generation fighter, hyper-velocity and anti-ship missiles, and anti-missile systems with anti-satellite capabilities for its own use could provide “an obvious option” to the Chinese, especially, for co-development agreements. India is leaning toward the United States and France for more advanced aircraft, radar and optics under licensing agreements, he said.

In his view, Denisentsev did not expect a boost in foreign arms sales to come from the Russian campaign in Syria. “An air strike on insurgents is nothing special,” citing NATO strikes in Libya as an example of where this has been done before.

“Most of the Russian technology is old technology” that is being used in the Syria campaign. He noted international agreements also bar the sale of longer-range cruise missiles Moscow employed and so far its keeping advanced air defense systems for its own use in the civil war. He added there would be little market for Russia’s heavy bombers, also used in Syria.

Denisentsev said it is difficult to measure arms sales because different organizations and nations use different methodologies to gauge them. At the same time, much is not on the public record either through the agreement itself keeping the terms secret or corruption to hide bribery.

For example, using Russia’s own figures, he said, “arms sales are flat” since about 2011, but using American and Swedish figures, sales are falling. Other reasons for flat or falling sales besides China’s and India’s own defense industry build-up and domestic demand are the collapse of the Libyan regime of Muammar Qaddafi and Venezuela’s economy. The fall-off in energy prices affected the buying power of other countries such as Algeria, Iraq and Syria.

Plus there is new strong competition from South Korea and China and to a lesser extent South Africa, Turkey and Singapore for arms sales to African and Middle East nations. For the Chinese, sales there would be a way of increasing their influence in the region.

For the future, Russia can look for niche markets in military robots and submarines to boost sales, he added; but that goes against its own history and need to meet the demands of the domestic market first.

In the past Russia was known for providing “cheap but deadly” weapons that “were easy to operate” and maintain and capable of being upgraded. The sale of advanced aircraft with their supply chain requirement, for example, and needed for skilled technicians would change that. In a follow-up question using the Su-35 multi-role fighter as an example, Denisentsev said before they could be sold to Ecuador, Peru or Colombia there “would need to be some financial support,” as well as long-term loans before countries such as those could buy them.