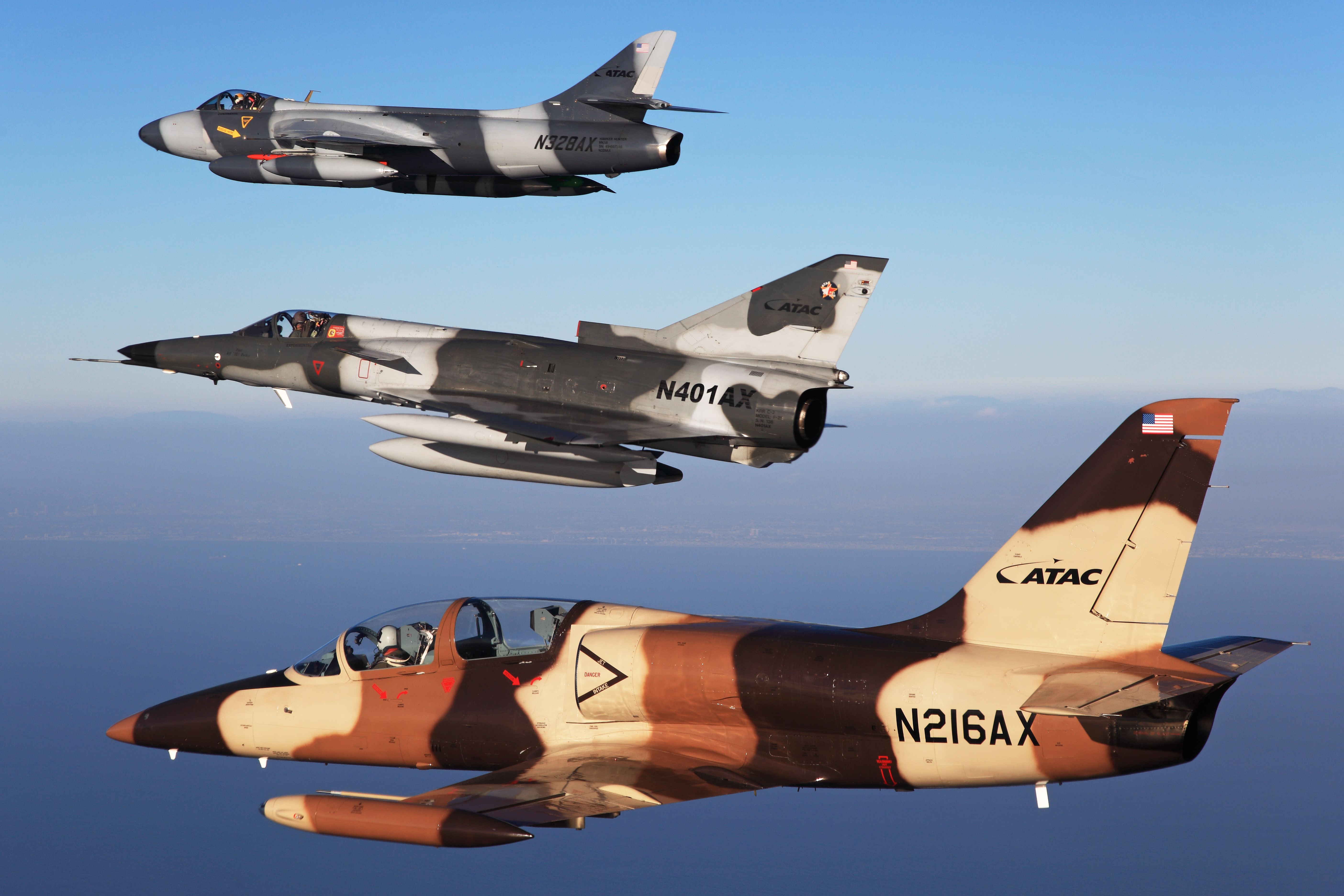 The Navy plans to expand its requirement for opposing force flight training to include fourth-generation fighters, and the company that currently provides that service is preparing to scour the globe for fighters for sale to meet this need.

Airborne Tactical Advantage Company (ATAC), a Textron company, already flies about 5,000 hours a year for the U.S. Navy – using a combination of older F-21 Kfir, MK-58 Hawker Hunter and L-39 Albatros jets – to help train pilots and ship crews ahead of deployments. The Navy now wants as much as 5,000 hours a year of fourth-generation red force capability alone, and the Air Force may buy an additional 37,000 hours a year, leaving ATAC to start figuring out where in the world to buy about 140 used fourth-generation fighters to meet this demand.

“The Navy and the Air Force are taking a really big leap in training capability by going to fourth gen,” ATAC chief executive officer Jeffrey Parker told USNI News on April 4.
“The Navy is putting their arm around this industry and saying, no really, we’re going to be doing this for a long time, because what you can do with a fourth-gen aircraft is a lot more than what we can do right now. They’re basically asking us to be one of them so that we can now do the same thing that the Hornets and Super Hornets are doing in training, the F-16s out at Fallon are doing in training. They’re looking at us to run the radars, do the missile shots, all this kind of stuff real-time, just as one of them. So it’s kind of a big deal. We’ve been embedded with them for a long time, flying with the guys that have the radars and doing the missile shots, but never been able to really do the full-up mission.”

ATAC has provided “adversary and aggressor services for the Navy” since the company was founded in 1994 by Parker, a 1988 U.S. Air Force Academy graduate.

“We train every aircraft carrier strike group, every amphibious readiness group, all the air wings on the carriers three or four times before they go on a cruise,” he said.
“We train every Top Gun class that goes through the weapons school, both coasts of the U.S. we’re doing all of this, and have grown the program to about 5,000 hours that we’re flying right now for the Navy. So it’s like a squadron and a half, with kind of a wing’s diversity of aircraft.”

When training ships, ATAC pilots might fly more basic profiles towards a carrier strike group at sea, “training them on how and when to detect the threat, what to do about it, who to hand it off to at the appropriate time, and all this kind of stuff that it takes to actually defend this aircraft carrier from thousands of miles out to close-in defense.” When opposing Navy pilots in the air, ATAC pilots might try to keep Navy pilots from advancing past a line, or might try to break through a line set up by the Navy. Engagements can be at long- or close-range, Parker said, and the fourth-generation fighters will allow ATAC to incorporate dogfighting into the training.

“There’s also basic schoolhouse kinds of things, where maybe a guy’s just having his first flight in the F-35 and he just needs to work the radar – and so in this case they might just send some more of (ATAC’s) more basic airplanes out and just give him two or four (opponents),” Russ Bartlett, president and CEO of the Textron Airborne Solutions business that bought last year, said in the same interview.
“Sometimes you just need airplanes to go employ basic systems against. So there’s a whole spectrum of work for us to do.”

Bartlett and Parker said the requirement for lower-capability engagements would likely endure, meaning the 3,000 to 5,000 hours a year of fourth-generation fighter airtime the Navy plans to buy would come on top of some amount of continued training with the older planes. The Air Force intends to start with a smaller contract for fourth-generation fighter adversaries at Nellis Air Force Base in Nevada and would then progress to a larger umbrella contract that could cover a dozen bases around the country.

“It’s a step that is probably going to be limited only by the industry and the aircraft that can be gotten around the world. There’s not that many fourth-gen airplanes you can buy right now in the world that will fit the bill,” Parker said.

He explained that ATAC would be looking for “Country X” that is in the process of upgrading its fighter fleet and may be willing to sell some of its fourth-generation planes as they are replaced by newer airframes. Fortunately, international deliveries of the F-35 Joint Strike Fighter are ongoing, with several militaries including the British, Dutch and Israeli air forces having received fifth-generation planes already. Country X’s fourth-gen planes would have to have some years left on them and have been sufficiently upgraded during their life so that they have relevant capabilities today.

If ATAC found a fleet that met those requirements, then the bureaucratic process would start. The State Department, through its embassies, would facilitate talks between ATAC and the foreign military, leading to a visit to inspect the airplanes and an eventual letter of agreement on the sale. A slew of State and Defense department offices would have to sign off on the sale before it could take place, though Parker said no one has ever imported fourth-generation fighters before and the presumption from State will be a no unless ATAC can prove its case.

“Their answer is basically no unless there’s an immediate benefit to the U.S. government. So you have to have a contract in hand to even think about getting the aircraft into the country, and then they’re going to of course have to get buy-in from the other agencies as well,” Parker said. He noted that the current contract with the Navy can be used to begin procuring the fourth-gen planes ahead of a later contract for solely fourth-generation services – a request for proposals from the Navy is expected this month, and the Air Force should begin its acquisition process in June or July – leaving the company and the Navy to explain the need for high-end training opportunities for pilots.

“We are less expensive than military jets. We let the military save time and usage on their fleets of fighters so they’re not burning up the Super Hornets as fast. And we also relieve some pilot issues in that pilots don’t have to go play bad guy right after they come back from a cruise … – kiss your wife goodbye again and go down there and fly bad guy for three weeks,” Parker explained. The F-35 will only increase the need for opposing force training, since the F-35 pilots will need to practice against more and more sophisticated adversary planes to fully maximize what the new jet can do.

Despite the “massive” growth the company will require to fully meet the Navy’s and Air Force’s needs – buying about 140 jets, compared to today’s fleet of 26, plus needing more people per plane to operate and maintain the more complex fourth-gen fighters – Parker and Bartlett said the prospects for a multi-billion-dollar deal with the two services looks promising. They hope to convince the Navy to sign an eight- to 10-year contract instead of the previous five-year terms, to help spread out the cost of acquiring the new aircraft over a greater amount of time.

But despite the great upfront cost of building up a fourth-generation fleet, Parker said “I think that we are confident and comfortable because we – ATAC and TAS, Textron – see and have seen the development of the demand over many years. But it is and can be grounds for pause when you look at some of the budgetary issues, continuing resolutions.”