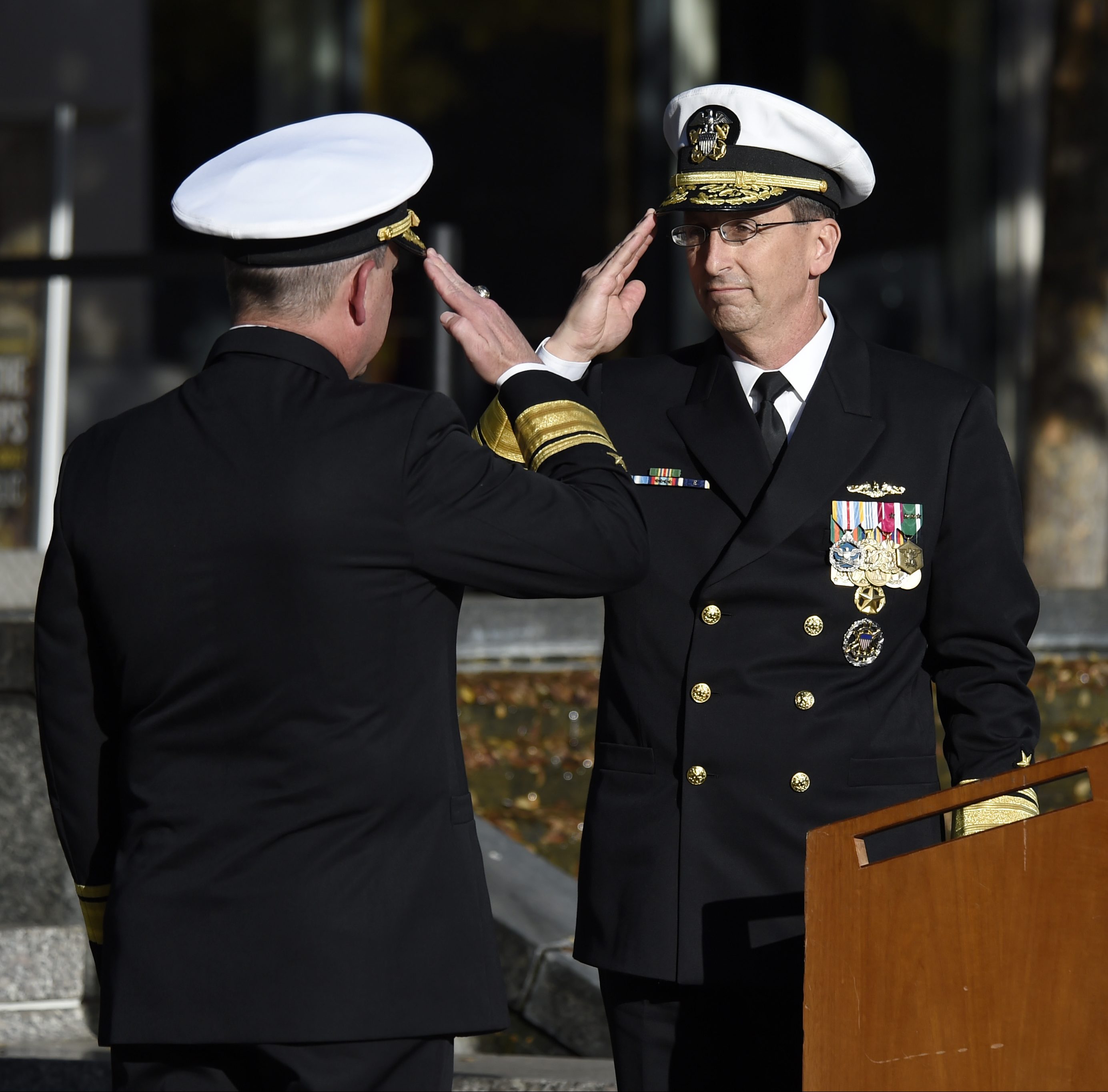 The Navy’s new chief of naval research vowed to work with the research community and the fleet to transition new technologies over the “valley of death,” the perennial problem of operationalizing technology that is made all the more challenging by a strained fleet with little time for experimentation.

Rear Adm. David Hahn said today at the American Society of Naval Engineers’ Technology, Systems, and Ships conference that an older model of introducing technological advances – waiting to install them on the next new ship class – would not be sufficient in today’s fast-paced environment and that he would try to help oversee a better technology transition process.

In many cases, new technologies being built challenge the power generation capabilities of already-fielded ships, and the Navy needs to get at that problem.

“As we look at new weapons systems, directed energy, lasers: have we deployed a laser on a ship? The answer is yes, we’ve done that. Okay. So why don’t I have lasers on every ship? Why don’t I have lasers integrated on the Aegis Weapon System? Why not? Is it because the technology doesn’t support? Nope. It’s because we can’t figure out how to absorb it,” Hahn said.
“We have an impedance mismatch through our creation of technology to our getting it into the hands of sailors and Marines in an effective way. And if we can’t do it in an affordable way – because we can’t just keep building new classes of ships to incorporate new technologies” – then the Navy’s fleet will risk becoming obsolete, he warned.

Another upcoming system that poses more of a fleet integration challenge compared to a technological one is the Tern unmanned aerial vehicle created by the Defense Advanced Research Projects Agency (DARPA). Small combatants whose weapons have longer ranges than their organic sensors could deploy this UAV to help extend their reach when operating solo, without the help of sensors from other ships or joint ground or air assets.

“I expect in a couple years we’ll have a prototype that’s off doing that: unmanned, go do the thing, long endurance, and then come back and land on the ship,” Hahn said.
“Not particularly hard from a technical perspective, a little bit of [science and technology] there; it’s more going to be how do we absorb those things” into the fleet. 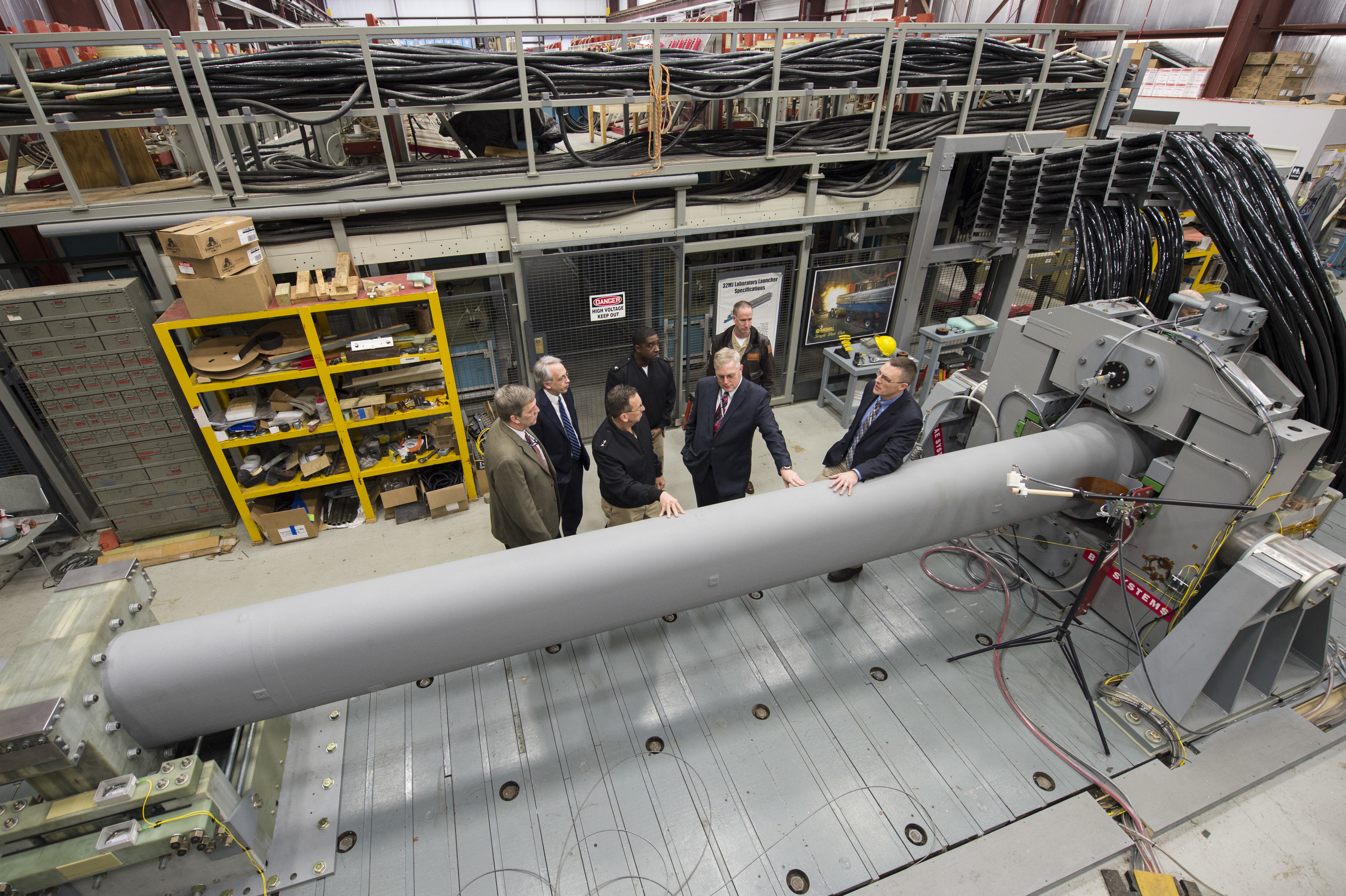 Tom Boucher, second from right, program manager for the Electromagnetic Railgun at the Office of Naval Research (ONR), talks to Rear Adm. David Hahn, chief of naval research, during a visit to the railgun facility onboard Naval Surface Warfare Center, Dahlgren Division on Jan. 12, 2017. US Navy photo.

Hahn told USNI News after his presentation that this challenging of “absorbing” technologies is partly a technological issue – today’s ships may not be able to generate enough power to sustain new directed energy weapons, sophisticated radars or other systems – but it’s also partly that finding a ship available to test out new gear can be a challenge. While everyone in the research community agrees they want to hurry and get prototypes “into the hands of sailors” to begin learning lessons to bring the system from a prototype to a fieldable product, Hahn said the Navy fleet is already stretched thin and can’t always accommodate these requests.

“Every one of those ships are very very busy because as the numbers go down and demand goes up, you cause them to always be in a deployment cycle, getting ready for a deployment, or back in a maintenance cycle that doesn’t allow you to have the flexibility to get the attention of the ship and the sailors as well as the availability of the ship to put some of these systems on there,” he told USNI News.
“So a very challenging environment to do the things we talked about.”

The Office of Naval Research and DARPA are collaborating on the Tern project to give forward-deployed small ships the ability to serve as mobile launch and recovery sites for medium-altitude, long-endurance unmanned aerial systems that would provide ISR and other capabilities. DARPA rendering.

He noted that a major tech transfer success, the Laser Weapon Systems (LaWS), was not integrated onto an operational warship in the fleet but rather was fielded on the spared-from-decommissioning USS Ponce (AFSB(I)-15) as a roll-on/roll-off system. As new technologies are ready for at-sea testing, “until we have the ability to absorb those technologies into (ships in the fleet), then we’ll keep using those kinds of methods.”

Another upcoming technology is the electromagnetic railgun, for which the Office of Naval Research will begin a new round of testing this spring. Hahn described the EM railgun as being “in the latter stages” of science and technology, and testing at Dahlgren, Va., this spring will ensure that the concept of moving a projectile down a barrel at high speeds by using a magnet will actually work in real life. He said during his speech that the upcoming testing would look to fire the gun at 10 shots per minute and test whether the barrel holds up to the extreme heat and the pulsed power system can keep up with an operational repetition rate.

After his speech, he told reporters that the upcoming tests would not focus on the gun’s range or accuracy but would strictly focus on how the gun holds up to constant use and what kind of maintenance and parts replacement the gun as designed today may need.