The following is the Jan. 18, 2017 Government Accountability Office report, Overseas Contingency Operations: OMB and DOD Should Revise the Criteria for Determining Eligible Costs and Identify the Costs Likely to Endure Long Term.

What GAO Found
In 2010 the Office of Management and Budget (OMB), in collaboration with the Department of Defense (DOD), issued criteria for deciding whether items properly belong in the base budget or in the overseas contingency operations (OCO) funding request, but the criteria are outdated and do not address the full scope of activities included in DOD’s fiscal year 2017 OCO budget request. For example, they do not address geographic areas such as Syria and Libya, where DOD has begun military operations; DOD’s deterrence and counterterrorism
initiatives; or requests for OCO funding to support requirements not related to ongoing contingency operations. Further, the amount of OCO appropriations DOD considers as non-war increased from about 4 percent in fiscal year 2010 to 12 percent in fiscal year 2015. DOD officials agree that updated guidance is needed but note that the Office of Management and Budget has deferred the decision to update the criteria until a new administration is in place in 2017.

Without reevaluating and revising the criteria, decision makers may be hindered in their ability to set priorities and make funding trade-offs. 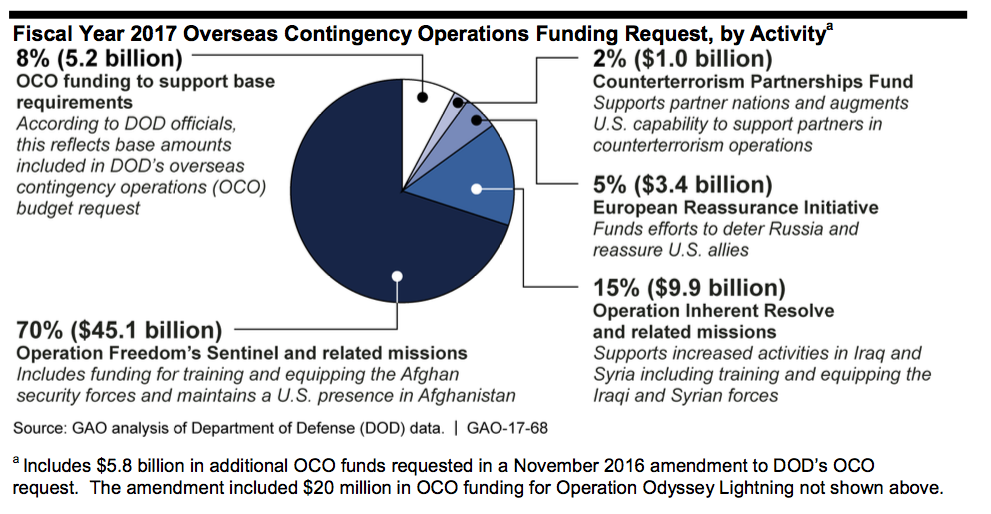 DOD officials told GAO that the department had developed an initial estimate of costs being funded with OCO appropriations that are likely to endure beyond current operations, but has not finalized or reported its estimate outside of the department. In May and July 2016, OMB and DOD officials said the estimate of enduring costs was between $20 billion and $30 billion—as much as 46 percent of DOD’s total OCO budget request for fiscal year 2017—and indicated that DOD continues to evaluate and revise this estimate, which might be closer to the higher end of that range. GAO recommended in 2014 that DOD develop guidance for transitioning enduring costs funded by OCO appropriations to DOD’s base budget. According to DOD officials, DOD has not finalized and reported its estimate of enduring costs because current statutory spending caps limit its ability to increase base budget funding. Without a reliable estimate of DOD’s enduring OCO costs, decision makers will not have a complete picture of the department’s future funding needs or be able to make informed choices and trade-offs in budget formulation and decision making.