WASHINGTON, D.C. – Building the 350-ship Navy fleet that President-elect Donald Trump has advocated would be a “herculean task,” Rep. Rob Wittman (R-Va.) said Wednesday, though industry could do it if the buildup were done in a stable and strategic way.

Wittman, who chairs the House Armed Services readiness subcommittee and co-chairs the Congressional Shipbuilding Caucus, said at the U.S. Naval Institute’s Defense Forum Washington event that he supported the idea of a larger fleet as long as the composition of the fleet was designed based on actual warfighting requirements.

“I think you need to do an analysis of what the threats are around the world, and the threats are indeed growing. So the question is, if you are going to grow to counter the threats, how do you grow in the right way to make sure it’s truly an effective counter?” Wittman said.
“The good thing about throwing these numbers out there is, it begs the question, it requires us to debate what is that force going to look like, and is 350 the right number or is maybe another number more correct?”

He suggested that ship classes currently under construction – the Virginia-class attack submarine, the San Antonio-class amphibious transport dock that leads into the LX(R) dock landing ship replacement, the Ford-class aircraft carrier – would have a place in that larger fleet. With already-hot production lines, build rates could be accelerated as an early step in trying to grow the fleet to 350, though Wittman cautioned it would still take a long time to reach that number. Starting new ship classes would only add to the timeline – and increase the risk – he said. 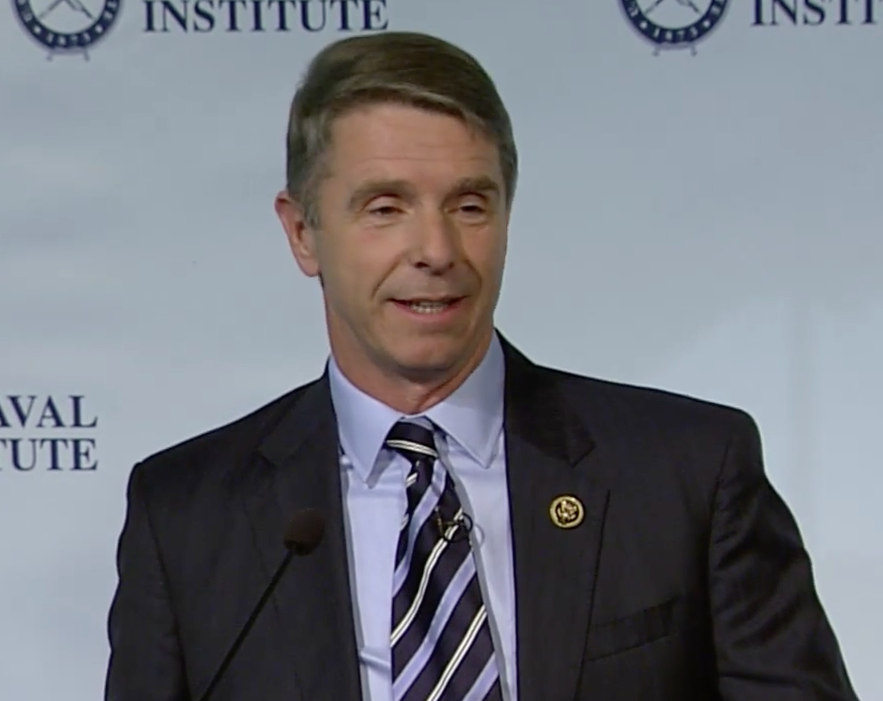 “What you could do to create some stability is to make sure there’s some longer-term certainty, so make commitments longer out with these particular classes,” Wittman told reporters. All the ship classes that could be built in the near term already have prime contractors and stable vendor bases with whom longer-term contracts could be signed, “so we’ve got that certainty there, so you have some flexibility to say, now let’s tune those programs, kind of increase the intensity there, since you know how those programs work, you know how to build those ships. … You can, I think, create some efficiencies there to accelerate build rates.”

Earlier in the day, Navy acquisition chief Sean Stackley spoke at the American Society of Naval Engineers’ Combat Systems Symposium at Washington Navy Yard and addressed the industrial base’s ability to get from today’s 272 battle force ships to the current goal of 308, and then even higher if called upon to do so.

“For the large part, our industrial base is well below capacity and well below efficient rate production,” he said.
“So can they handle it? The answer is, yes, but we have to be smart about, if we’re going to go ahead and start to build up our force, we’ve got to be smart about the sequence in which we engage with the industrial base to do that. So if you’re in shipbuilding and you want to increase the rate at which you’re building submarines, the first thing you need to do … is go in the mine and get the ore out that we’re going to use to start to manufacture our reactor plant. So you have to actually go to the vendor base first (for) the long-lead material items. And typically a lot of our vendors don’t have the depth and breadth of large manufacturers … so we have to shore them up first. Second is going to be skilled workers. While we might have the capacity and the throughput and the tools, we have to make sure we have the skilled workforce in terms of the right skill mixes as well.”