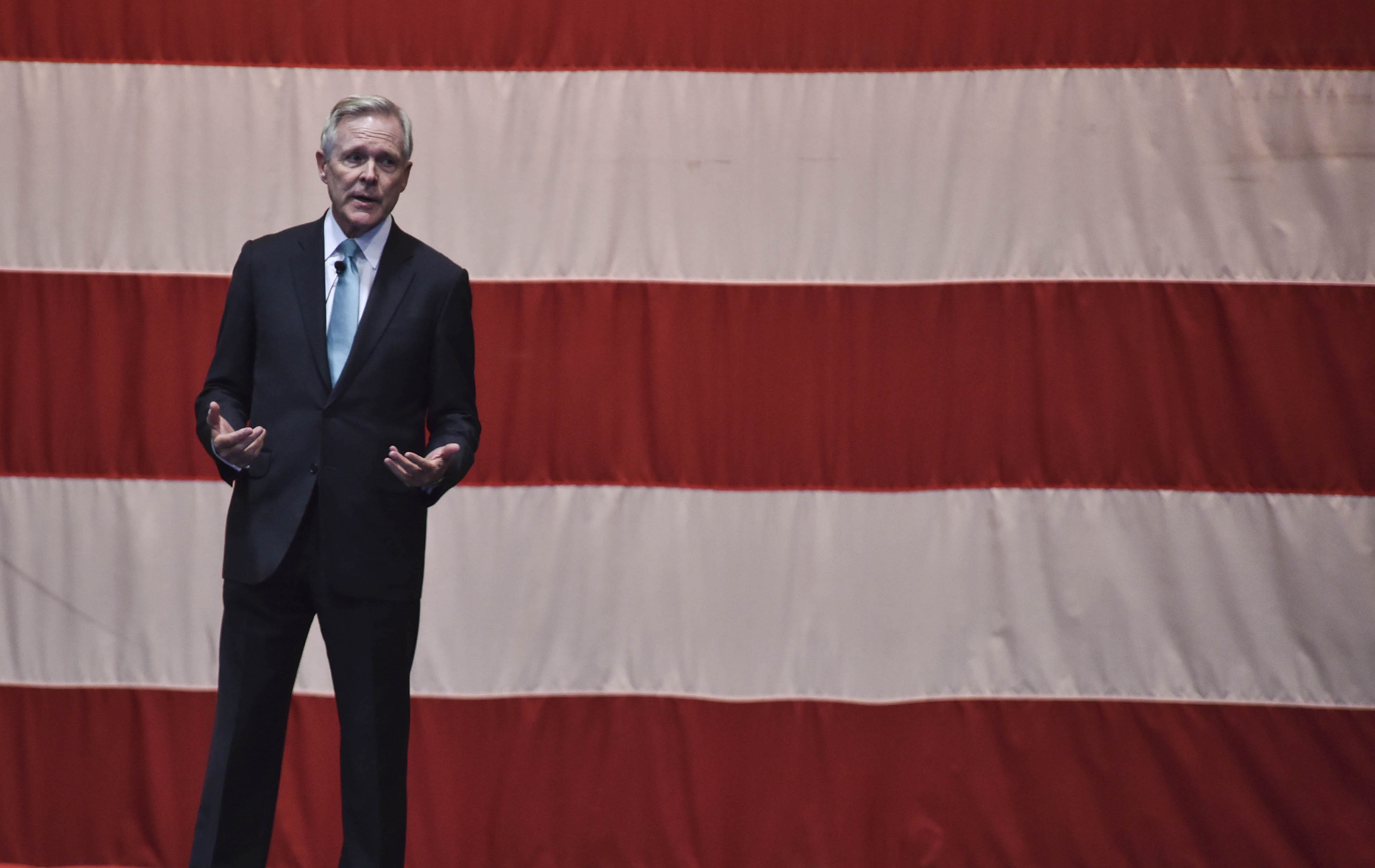 Secretary of the Navy Ray Mabus speaks during an all-hands call at Naval Base Kitsap-Bremerton on Oct. 21, 2016. US Navy

The biggest surprise Navy Secretary Ray Mabus had when he took office was how slowly the bureaucracy moves and the different tactics it uses to kill a program it doesn’t want.

The bureaucracy can study the program to death “for second and third order of effects” inside the services or saying the question needs to be addressed Defense Department-wide.

Speaking Monday at a Center for a New American Security forum with the other secretaries, he added he had no idea what the issues were facing the sea services or preconceived notions about what he needed to do when he took office.

But the “Pentagon does well . . . in getting you ready” for the new job quickly.

“We’re ready to transition today on big items”—from threats to acquisition to personnel when a new administration takes office in January, and the work of handing over responsibility begins right after the votes are counted.

Mabus said he realized early on in office, “we didn’t have enough ships” to meet the requirements of the regional combatant commanders. “You were having to make choices” of where to position vessels. Picking up on what the other secretaries said about the role of the service secretaries and chiefs in “giving the future a place at the table,” he said the Navy embarked on a shipbuilding program that now has 86 vessels under contract.

“You’ve got to do that not knowing what the threat is going to be” possibly from Russia, China, North Korea, Iran, the Islamic State or other state or unidentified terrorist group because “we’re not very good at foreseeing the future.”

Later, in answer to a question from the audience, Mabus said developing personnel policy and acquisition strategy “can’t be just one administration” over four years. “You can’t simply say, ‘we’re there'” when a goal is reached.

On personnel policy, he said the Navy and Marine Corps have set standards for performance for each specialty, ‘If you meet the standard, you get the job,” regardless of gender, race or sexual orientation. “No one is suggesting lowering the standards.”

Mabus added, “We have simply not done a good enough job of recruiting [and retaining] women.” The retention issue comes down to a decision of “service or family,” often at the 12-year mark. “It’s always the woman who makes the decision.” He wants the sea services to provide policy means so they do “not have to make” that choice but can take extended breaks, return and still be promoted.

He said he once used a chart that “looked like a plate of spaghetti” to explain to a congressional committee what the procurement process was like in the Navy to establish a “program of record,” a line item in the budget and how long it took to field it.

To meet immediate warfighting needs, Mabus said, the Navy has been using pilot programs, such as with laser weapons first placed on USS Ponce to determine effectiveness quickly and make a decision to kill or proceed. Because the six-month pilot showed favorable results, “we’re using it now to develop follow-on-weapons” four years later.

He said that the Navy and Marine Corps deployed forces are at “the top of readiness” levels as are the forces that would immediately follow them, but the “surge force” is not getting enough training and equipment, and ships enough maintenance.

“The value of naval force . . . is presence.” He cited the quick response to missile attacks launched by Houthi insurgents on Navy ships as an example of that value. “We had a Tomahawk shooter [USS Nitze] there,” he said.

“You have multipurpose platforms,” such as guided missile destroyers, and “train sailors and Marines to be flexible and adaptable” in responding to threats like the missile attacks and responding to them.

Mabus said, “We do this as a joint force.” Picking up on that, he added the Navy, like the Air Force, is capable of continuing operations against the Islamic State while also establishing a no-fly zone in Syria.

In addition, “We operate off sovereign U.S. territory” that does not require seeking another government’s permission to strike, as the Navy did in 2014 to combat the territorial gains the Islamic State was making in Iraq.