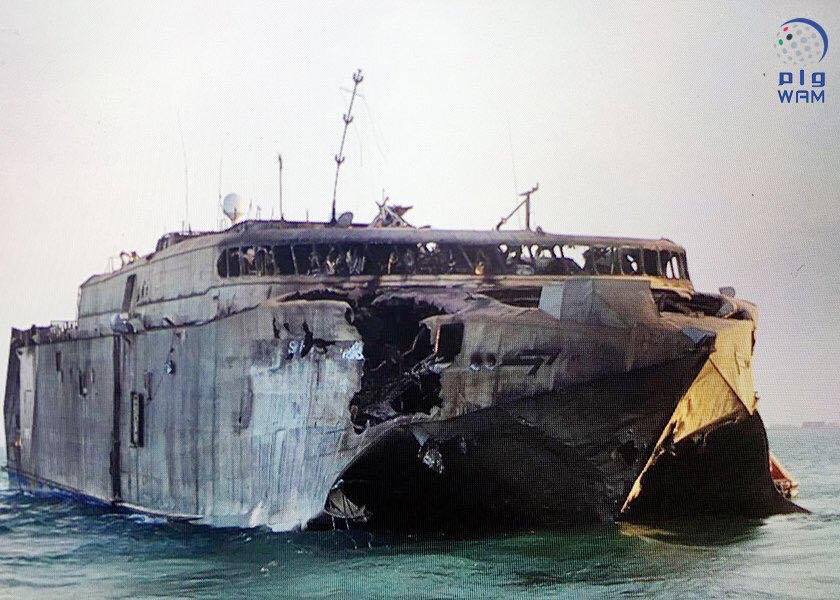 HSV Swift following an attack by what is believed to be a C-802 Chinese-built missile.

This is the second of two opinion pieces examining the Iran nuclear deal and the recent attacks in Yemen.

Recent events in the Middle East illustrate the continued expansion of Iranian influence, and the lifting of economic sanctions in January 2016 as part of the Joint Comprehensive Plan of Action (JCPOA, the “Iran Nuclear deal”) will accelerate this strategic trend by reviving Iran’s economic health. The nuclear provisions of the JCPOA might work to prevent Iran from becoming a nuclear weapons state in the next ten years; however, Iran has demonstrated with certainty that it will use the infusion of cash to further support proxy groups to achieve its interests in the region.

Iranian financial and matériel support to proxy groups in the region commenced soon after the Islamic Revolution in 1979. Iranian fingerprints were uncovered in both the Beirut Embassy and U.S. Marine Barracks bombings that killed more than 250 Americans and were carried out by Hezbollah in Lebanon in 1983. Hezbollah executed the Khobar Towers bombing in Dhahran, Saudi Arabia, in 1996, killing 19 and wounding 372 Americans. Iran provided financial, matériel, and weapons support to various Shia militia groups in Iraq beginning in 2004. Hundreds of coalition troops were killed or maimed by Iranian-supplied improvised explosive devices (IEDs), and Iran’s support for Shia militias sustained the insurgency and stalled the reconciliation process between the Sunni, Shia, and Kurdish sects in Iraq. Iran supplied Hezbollah with short- and medium-range rockets and advanced anti-tank weapons that were used to great effect during the 2006 Israeli-Hezbollah conflict. The level of sophistication of Iranian support to Hezbollah was underscored by the successful execution of a C-802 coastal defense cruise missile (CDCM) strike by Hezbollah against the Israeli INS Hanit corvette during the 2006 conflict. Hezbollah reportedly aims more than 11,000 Iranian-supplied rockets at Israel today, and 3,000 Hezbollah fighters have reportedly undergone training in Iran. Additionally, the Iranians have supplied Hamas with Fajr-5, M-75, and M-302 rockets along with unmanned aerial drone technology that has been used to create mayhem from Gaza. 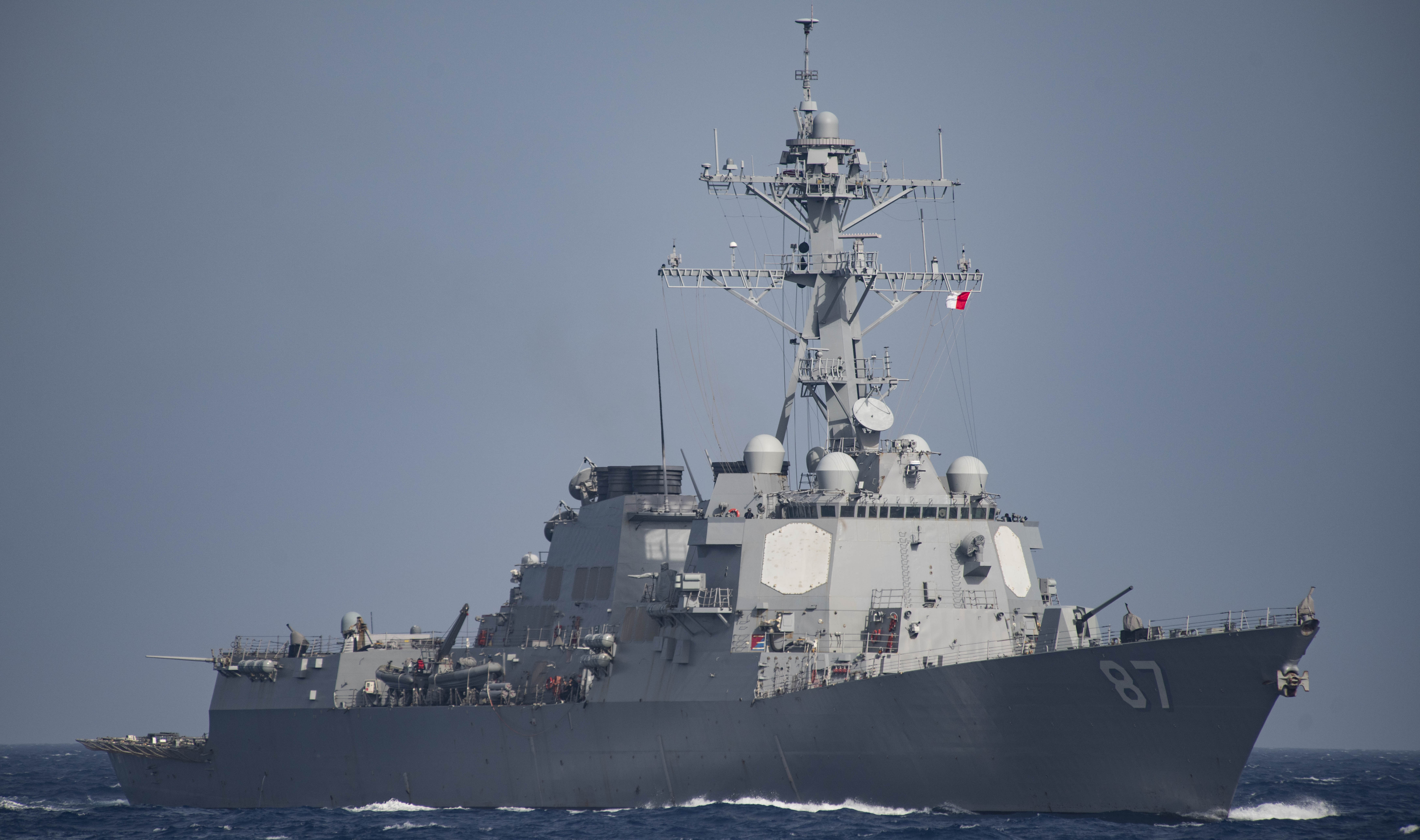 The Iranians provided those levels of financial and matériel support to proxy groups in spite of the crippling effects of economic sanctions dating to 1979. In 2015, U.S. Treasury Secretary Jacob Lew estimated that Iran’s economy was 15 to 20 percent smaller due to the ratcheting up of economic sanctions in 2012, including approximately $160 billion of lost oil revenues. When the sanctions were lifted this past January, Iran was granted access to $100 billion in U.S. and European assets that had been frozen since 1979. Additionally, Iran is courting Western oil companies to invest in exploration and modernizing Iran’s oil infrastructure, and Iran’s oil minister recently announced that Iran’s crude oil production should exceed 4 million barrels per day by the end of 2016, which would exceed pre-2012 sanctions levels.

Any officer who has ever served on the Chief of Naval Operations staff has heard the phrase, “It’s all about the money!” Stated another way, from money, all power flows. Money is the lifeblood of Iran’s support to its proxy groups, and the lifting of economic sanctions will provide Iran with more money to further achieve its objectives in the region.

Strategy is often defined as the interplay between ends, ways, and means. Any hope that the JCPOA would empower moderates and reformers to alter Iran’s strategic ends has been dashed by Iranian actions over the past year. Iran has continued to supply money, weapons, and fighters to bolster Bashar al-Assad’s brutal campaign to suppress the remnants of the Arab Spring revolution in Syria. Iran continues to provide financial and matériel support to Hezbollah in Lebanon to threaten Israel’s security, and continues to provide financial and materiel support to the Houthi rebellion in Yemen that has resulted in three incidents of Iranian-supplied CDCM launches from Houthi-controlled territory in the past three weeks, striking and nearly sinking an Emirati-leased Swift vessel and twice missing a U.S. Navy destroyer operating in vicinity of the Bab al Mendeb Strait at the southern end of the Red Sea. In light of the lifting of sanctions, the United States should expect more of those types of proxy attacks as Iran ramps up its financial and matériel support.

The non-nuclear provisions of the JCPOA were strategically irrational in that they bolstered the ways and means available to Iran to achieve its ends, which clearly run counter to U.S. strategic ends in the region. There are currently only three nations designated as “State Sponsors of Terrorism” by the U.S. State Department—and Iran is one of them. No U.S. leader would ever suggest that America should provide money and weapons to other terrorist organizations such as al Qaeda or the Islamic State of Iraq and al Sham (ISIS); however, that is exactly what the non-nuclear provisions of the JCPOA provide for Iran—more money, which Iran will undoubtedly utilize to bolster its own military strength and that of its proxies in the region. As long as the revolutionary Shia clerics continue to maintain their grip on the levers of national power, only the naïve will continue to hope that Iran will modify its strategic ends. While it will be difficult to undo the provisions of the JCPOA given the investment to obtain consent by the P5+1 powers, the United States should examine other alternatives to alter Iran’s ends/ways/means calculus—and in the meantime, brace for impact from other proxy attacks.