The Littoral Combat Ship (LCS) program, like the rest of the Navy, has been in the midst of a large turn since the end of the last decade when the Navy began to come to grips with a new global strategic situation.

The post-Cold War era where the only threats expected were rogue states such as Saddam Hussein’s Iraq and non-state terrorist actors is receding into the past. A new world of peer competitors, strong regional opponents and powerful terrorist rump states now confronts the United States and its allies. Core U.S. interests such as freedom of the seas for the free flow of trade, however, remain constants even as the United States changes course to meet new strategic challenges.

The Navy has also been changing course in terms of the operational construct for the LCS. While the recent adjustments announced in the LCS’s training program, modularity, and operational organization may seem revolutionary, they merely reinforce the ship’s core mission elements. The bulk of the LCS force will be forward-deployed in support of operational commander tasking. There will still be “crew swaps” in order to keep the ships forward deployed for longer periods. Modules may remain with one ship for years at a time, but can be exchanged if operational requirements demand. Deputy Defense Secretary Bob Work always suggested that, “After fleet operators get their hands on the ships and refine old operational and logistical support concepts and develop new ones, there is little reason to think the ship will not be an important contributor to twenty-first century Total Force Battle Network operations.” Changes to the LCS program announced by Vice Adm. Thomas Rowden, commander, Naval Surface Force, are just part of that fleet operator adjustment.

The new LCS squadron organization of three ships forward deployed and one located in the continental United States (CONUS) is not substantively different from the previous 3-2-1 organization for the class. 3-2-1 was designed to ensure,

The new, nominal squadron organization of three squadrons of four ships on each coast amounts to 18 forward deployed LCSs, six CONUS-based ships for training and four dedicated training units (LCS-1 to LCS-4) still ensures 65 percent of the regular LCS force remains forward deployed at all times. The 10 CONUS-based ships can in Rowden’s words, “Could deploy overseas or be used as training platforms. The intention is for the four testing ships to operate from their respective homeports, but it may be possible to deploy them in a surge, for training, or for testing. Each testing ship will be manned by a single crew and be commanded by an experienced post-command LCS CO.” 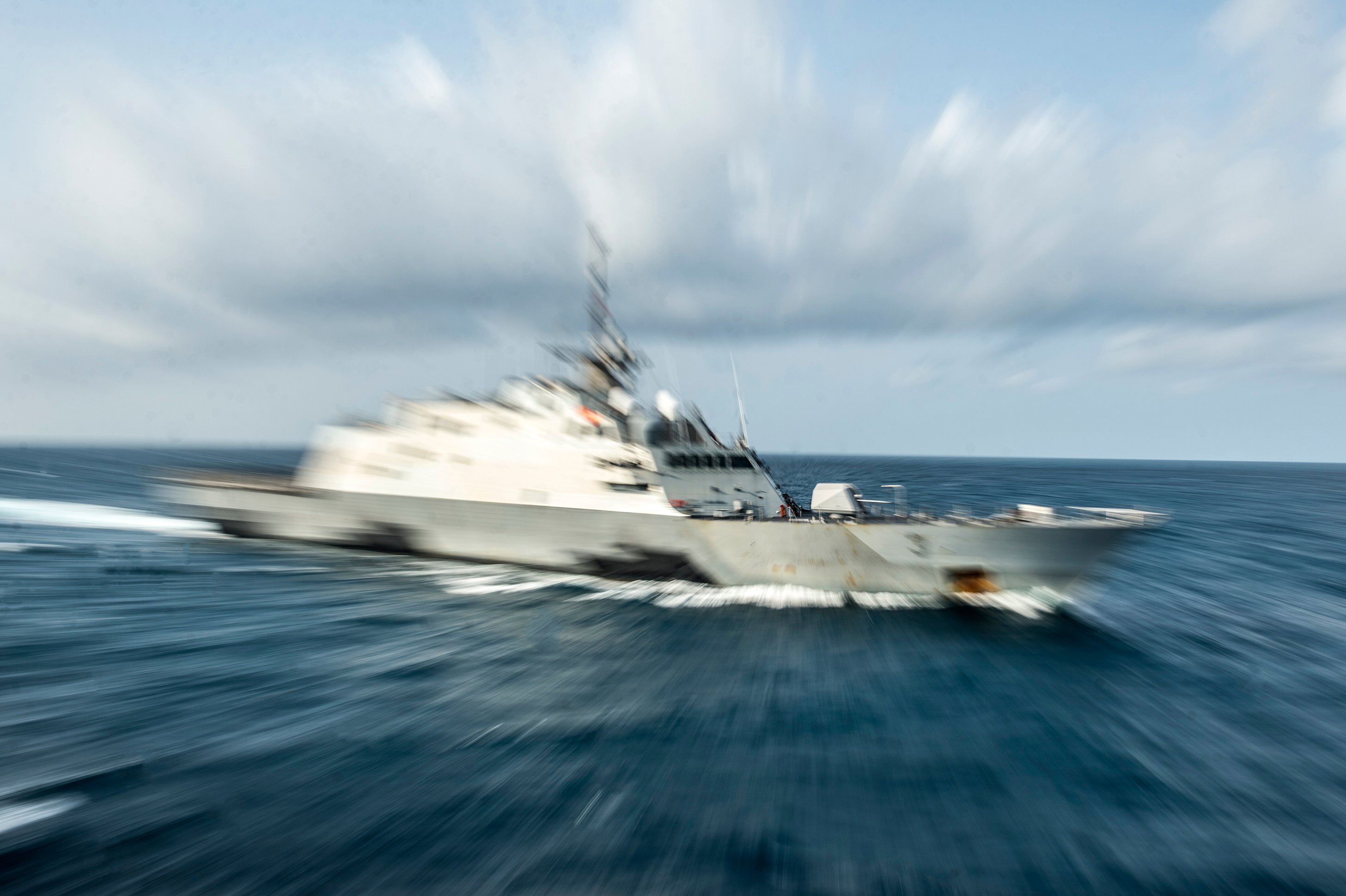 USS Fort Worth (LCS-3) participates in ship maneuvering exercises in the Java Sea on Aug. 9, 2015

The change from the 3-2-1 crewing concept (3 crews, 2 ships and 1 ship always deployed) was seen in the CNO review language as perhaps too cumbersome to execute and reduced notions of equipment ownership among the rotating crews. Cultural change of this magnitude is not something the Navy readily embraces. The service experimented with rotation crews in the last decade with uncertain results. The new blue and gold rotation is designed to provide, “a better blend of ownership, stability, and increased training for each crew.”

Rotational crewing was and remains a requirement in order to achieve the desired percentage of forward deployed LCS units. Single crew LCS ships would need to deploy from the United States across oceanic spaces, a process known to degrade a ship’s life expectancy over time. Permanently basing LCS units forward, similar to ships of the U.S. 7th Fleet, would require additional housing and facilities for dependents of those crews. Long, single-ship deployments have weakened morale in past decades and led to reduced retention of sailors subjected to these log periods away from home.

Despite some reports to the contrary, the changes to the LCS program do not increase the ship’s crew size. According to Rowden, “The crew size does not actually increase; the ship’s crews and mission module detachments are fused. The ship’s original crew of 50 sailors will be fused with about 20 sailors from the mission package detachment.” An additional group of about 20 sailors from the aviation detachment rounds out a complete LCS complement of 90.

Modularity is likewise not now in a “dead on arrival” condition, but has moved to a higher level of decision. Rowden stated, “While the modularity of the LCS sea frame remains the same under the new concept, the reality of the operational environment is that a decision to change mission modules would happen at a strategic level, likely in response to a progressive, long-term threat.” The modular concept embedded within the LCS sea frame remains well founded in terms of upgrades. The report states, “LCS has a well-defined interface control document (ICD) that facilitates easier upgrades and capability additions based on the ship and mission package modularity. The ability of LCS to easily remove obsolete weapons and sensors and replace them with upgrades will be much quicker and more efficient than the upgrade process on legacy surface ships.”

The changes described in the CNO’s 60-day review of the LCS program are the right course correction to further ease the introduction of the class into the Fleet. The core LCS missions of a high rate of forward deployment and minimum-manned ships have not been changed as a result of this review. Modules can still be changed at the strategic decision-making level. The Navy still needs upwards of 52 small combatants and the LCS is still designated to fulfill that requirement. LCS is still on course to enter the Fleet in large numbers in support of increased forward presence and warfighting capability. LCS critics should perhaps consider all these points before claiming any sort of “victory.”