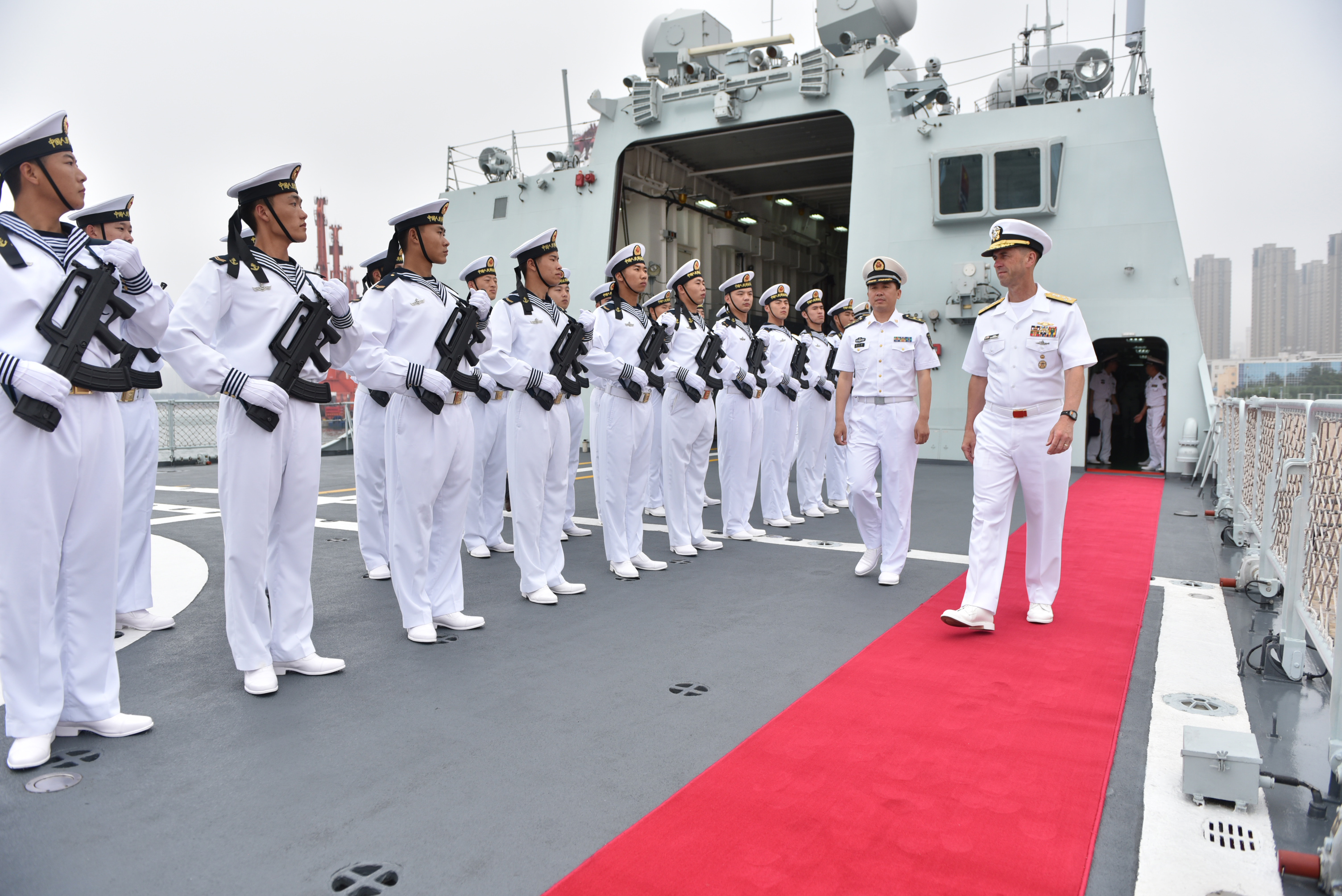 THE PENTAGON – Chief of Naval Operations Adm. John Richardson met with his Chinese counterpart last week in the hopes of moving their naval relationship from a set of actions and reactions to a more beneficial series of meetings, port calls and exercises that increase understanding and interoperability.

Richardson met with Adm. Wu Shengli in Beijing on July 18 for a series of professional talks and social events to build their relationship. Shengli has led the People’s Liberation Army Navy (PLAN) for nine years, and while the two have maintained a “regular dialogue” via video teleconference since Richardson took command last fall, this was their first face-to-face meeting.

Though Wu made clear China would not stop building up artificial islands in the South China Sea, USNI News previously reported, Richardson told reporters today that he made clear the U.S. Navy has long operated and would continue to operate in the region – and he stressed that this presence didn’t have to be seen as part of a move/countermove paradigm.

“It’s a complex situation. They’ve established a dynamic I think where they’re trying to posture many of their actions as a responsive measure to things that we’re doing,” Richardson said at the Pentagon.
“So I made it fairly clear that our activity in the South China Sea has been by and large relatively constant for a long time. We’ve been present in the South China Sea for a long time, and the activity levels and complexity and all that has not really changed significantly. … So I said, this has been fairly constant, so what exactly are you responding to?

“He made the point, well there’s been an awful lot more media attention on this than there has been in the past, and I said I get that – we have a free press and they’re going to cover where their interests go. And their state media is also talking about this as much, if not more, than Western media,” the CNO continued.
“So we had a nice discussion about the role of media, how the media is influencing populations, maybe raising expectations or raising emotions. … As leaders, we’ve got to make sure we keep all of this in perspective, so if there’s an initial emotional response, okay fine, but we’ve got to get past that to a responsible relationship where we can judge each other on our professional behaviors and always try and mitigate tensions, mitigate risks.”

After the meetings in Beijing, Richardson headed to the headquarters of the North Sea Fleet in Qingdao, where he met the fleet’s commander, Vice Adm. Yuan Yubai, met with junior officers and toured several ships, including the carrier Liaoning (CV-16), a Yuan-class submarine and a frigate. 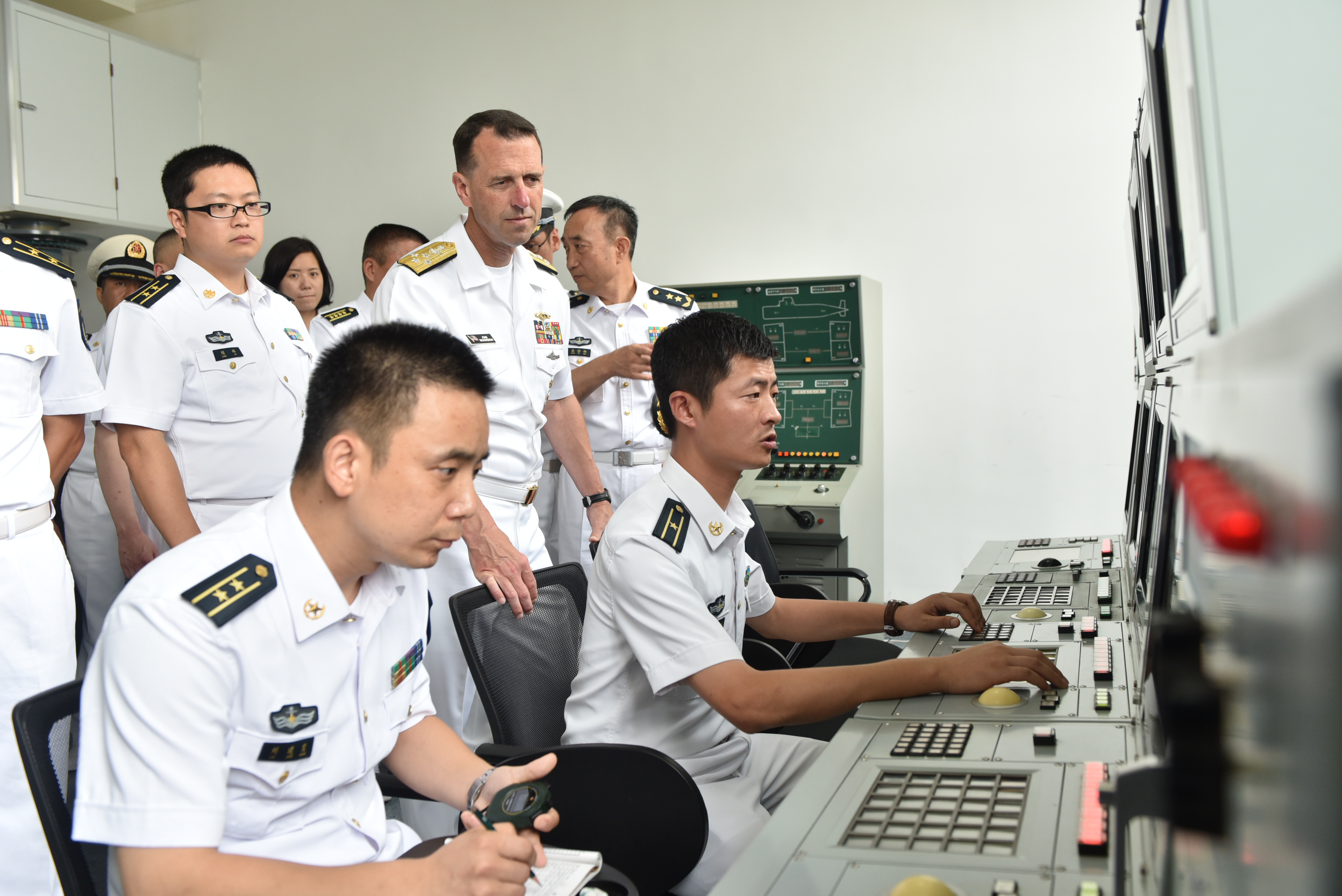 “The aim of the visit was to do that personal relationship, to have that face-to-face meeting,” Richardson said, adding that two focused on positive talks about how to improve their navy-to-navy relationship.
“We look forward to having their delegation, Adm. Wu included, back to our International Sea Power Symposium in Newport (Rhode Island) in September. These kind of regular drumbeats I think are very important so that we can continue to work those areas where we have mutual interests and we can find those areas of collaboration, and also have those honest discussions about where we see things a little bit differently and how are we going to get through that.”

As an example, Richardson said the two talked about the importance of mutual port calls and spoke about increasing their frequency. Without getting into specifics, Richardson said “I think there’s a general agreement between two sides that we can increase those mutual port calls overall to each other’s benefit, and there was one kind of in the near term we’re planning on that we wanted to make sure it was confirmed, and they all seemed to say yep, that one’s on track and approved.”

China has canceled several port calls for U.S. Navy ships, some at the last minute, to show their displeasure over American actions. In May the Chinese denied the Stennis Carrier Strike Group a visit to Hong Kong after Defense Secretary Ash Carter visited the aircraft carrier and spoke about tensions in the South China Sea.

Richardson said he did not discuss the canceled port calls but “I think there was some progress made that talked about the importance of port calls, making sure that they happen.”

Overall Richardson said he was pleased to see areas of cooperation, most notably the Chinese participation in the Rim of the Pacific 2016 exercise taking place in Hawaii now. He said the U.S. Navy would continue operations, including freedom of navigation operations, in the South China Sea – even though these FoN Ops are where the PLAN and Chinese leadership “feel the rub a little bit most directly.”

“We’ve got interest in the area, we’ve got commitments to allies and partners in the region, and oh by the way international law permits us to be there and we’re going to continue to be there,” he said, while also stressing that the naval relationship with PLAN is “developing and moving forward in so many ways.”