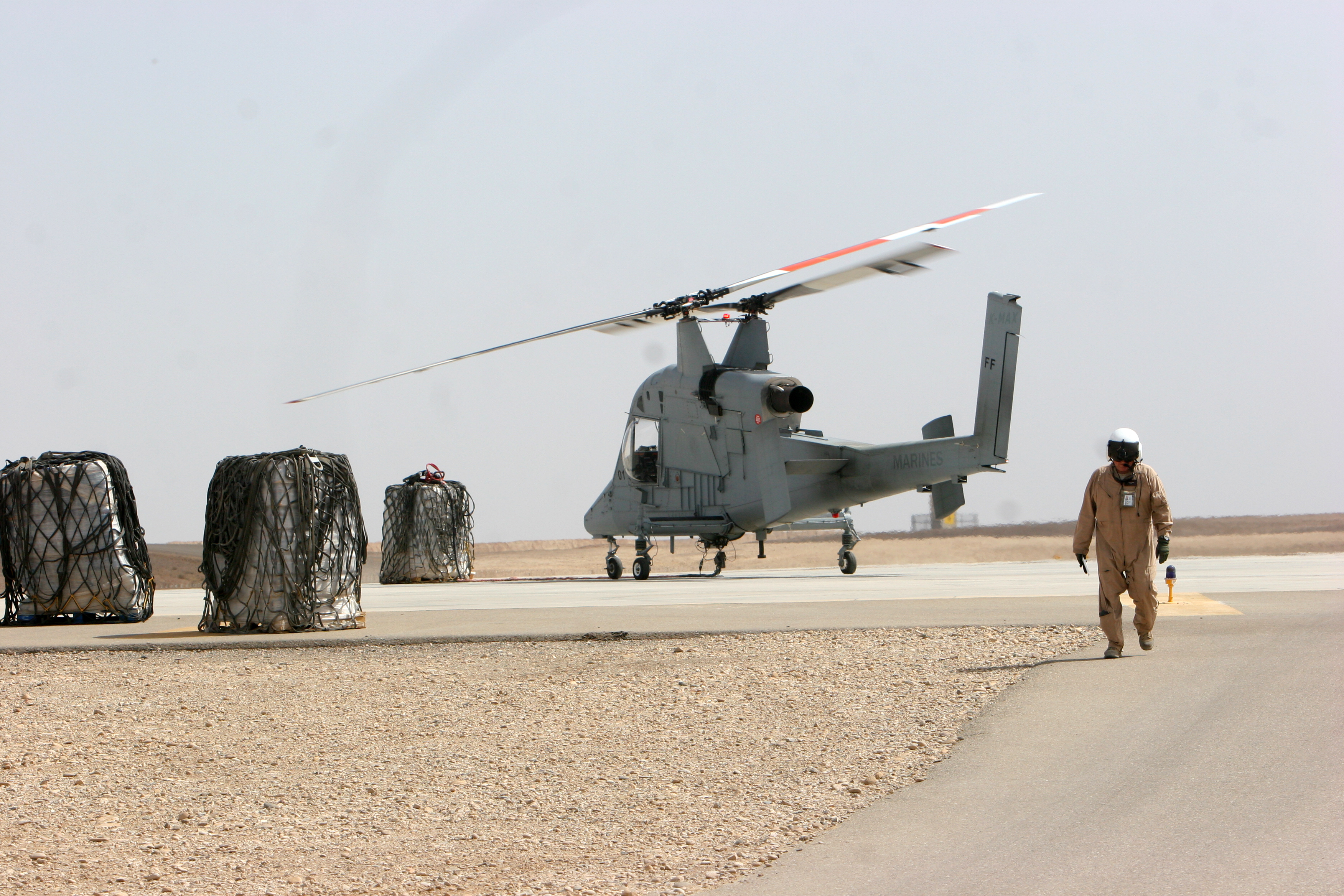 A Cargo Resupply Unmanned Aircraft System spins its blades in preparation for flight aboard Camp Bastion, Afghanistan, May 19, 2014. The CRUAS was an alternative logistics capability able to resupply outlying forward operating bases as well as retrograde equipment, reducing the number of Marines and vehicles on the roads surrounding Camp Leatherneck, Afghanistan. US Marine Corps photo.

Whereas Marines have previously resupplied by transporting a massive amount of fuel, water, ammunition and more from ship to shore and then putting it on trucks for distribution, Deputy Commandant of the Marine Corps for Installations and Logistics Lt. Gen. Michael Dana said the Marines’ future operational plans – distributed operations by small units – as well as the enemy’s increasing capabilities will require innovation in how troops are sustained in the field.

As Dana looks at the future of lift and distribution, he said unmanned vehicles in all domains could revolutionize how the Marines move goods into and throughout the battlefield.

Most basic is using unmanned aerial vehicles to move goods. He said he had experience with K-MAX in Afghanistan, which was “very good for getting goods out, very good for geo-isolated, very remote locations. And it was very user-friendly.”

He added that he wanted the Marines to bring in UAVs as small as what Amazon has discussed using for local same-day deliveries and as large as K-MAX and “everything in between.” On the larger end, he described a scenario in which a manned CH-53K could carry a Joint Light Tactical Vehicle (JLTV) into the battlefield, while a couple unmanned vehicles brought 4,000 pounds of ammunition or other supplies that the JLTV would need.

Though Dana wouldn’t endorse K-MAX or any other specific system, he said “we’re looking for like capabilities.” He did specify that, rather than buy expensive multi-mission UAVs, he would prefer to buy a lot of very basic UAVs and tack on mission packages as needed.

“I’d rather have 50 trucks at a low cost, then if 25 get shot down it’s not a disaster. Whereas if I only have 10 Swiss Army knife, does all things, and we lose those 10, not good. That’s our view on it,” he said, adding that he envisioned operating these UAVs in a swarm tactic.

“If you had a force that was operating in seven different locations in an archipelago, very remote, distributed, and if you had a near-peer competitor that could shoot down a lot of what you’re sending at it, if you sent unmanned in a large number and you lose a percentage of that force, it’s not good, but you’re not losing lives,” he said.

UAVs aren’t the only unmanned vehicles Dana is eyeing, though. He said the Motor-T community is the second largest in the corps, behind infantry, and that a fleet of unmanned ground vehicles would save a lot of manpower and keep Marines safe from roadside bombs and other threats.

He also said he’d like to pursue unmanned surface craft to bring goods from ship to shore. And he said he wants the Marines to join the Navy in the undersea unmanned vehicle business. Dana discovered an undersea cache system at a science fair at Johns Hopkins University, where small vehicles could be places on the ocean floor and activated at a later time, swimming to a designated location and bringing along the supplies stored inside whenever an operator sent out the electronic signal. A small UAV could fly over and send out the signal, he said, and a larger UUV could be sent out to distribute the undersea cache vehicles, further exploiting unmanned technology.

Lessons learned from this hybrid model, as more and more unmanned systems are brought it, could lead to a future model that relies even less on humans directly moving goods.

On supply and maintenance, Dana said additive manufacturing could help flatten out the steel mountain by reducing the quantity of spare parts units would have to bring with them or order for resupply. With 3D printers at key nodes in the resupply chain, components could be manufactured closer to where they are needed.

Dana said the capability to print plastic parts is very good but that metals are taking more time to understand. The raw metals can be flammable, which is a particular concern aboard amphibious ships.

To help understand the capabilities and limitations of 3D printing, Marines at Camp Lejeune, N.C., and Camp Pendleton, Calif., are working in Fabrication Labs. Their lessons learned will not only inform future logistics decisions but could also get the service out of a tight spot in the near term – having held onto the Amphibious Assault Vehicles (AAVs) and some aircraft for much longer than originally intended, the service now finds itself needing components whose manufacturers have long gone out of business. 3D printing is already being used in the aviation community to address this challenge and could be used on AAVs as well, Dana said, pending the Marines’ ability to secure the data rights to the designs.

A sophisticated logistics IT system would also go a long way in helping maintainers and logisticians be more efficient. Dana said the Marine Corps will compete for a LOG IT solution that will connect all the various logistics databases, to allow a single user on a single computer to search all the Marines’ records.

In the longer term, though, Dana said he envisions a barcode system that in real time tracks people and goods on the battlefield. He said that 20 to 25 percent of helicopter lift time in Afghanistan is loitering, and having a clearer sense of where people and things are could cut down on that.

“f you’re able to track everybody moving around the battlefield with a LOG IT system that was safe from cyber – that’s the hard part, you’ve got to make it where it can’t be compromised – but you could create movement tables for people and cargo nearly real time,” he said.

Taking that one step further, Dana said he was pushing for sense-and-respond logistics, where predictive maintenance work and just-in-time logistics come together. Under this scenario, the maintainers would “have historical trends in terms of what parts break, and then you’re only bringing those” from the outset of the deployment, and “you can very accurately calculate what your parts buys should look like” for resupply efforts.

He said many automotive companies have gotten that down to a science, while the Marines are at about a 3 on a 10-point scale. The service is conducting a pilot program at the Motor T school at Fort Leonard Wood, Mo., to practice predictive maintenance and ordering the parts they believe they’ll need just in time.

Finally, on the medical side, Dana said the service is making great advances in putting a casualty pod on the side of a UAV. He also saw at a consumer electronics show a pair of goggles that can sense a patient’s heartbeat and a band-aid-sized sensor that feeds the system the patient’s other vitals.

“What we’re really looking at is that care from time of injury to the main level 3” trauma center treatment, he said, and the service is standing up an advisory ground to look at current technologies and their applications to military medicine.

Dana said there is a lot of innovation happening today, but “you’ve got to go after some very focused, achievable goals that will yield operational and tactical dividends that everyone can see, because the thing that I have a hard time with is, the good news is we’ve got a lot of innovative people, the challenge is there’s tens of thousands of good ideas out there, and everyone wants to go in so many different directions because there are so many neat things.

“But in our world, if we can get – and we’re really focused on it – unmanned aerial capability, 3D printing, sense-and-respond logistics. If we could just really focus on those and mature those, that would be pretty good,” he said.

To do so, the Installations and Logistics Directorate has received some seed money for experimentation, to get an idea of what works before sending input to the Combat Development and Integration Directorate and the Marine Corps Warfighting Lab. Dana said his Marines are teaming with the Army on some UAV technologies, and he is working closely with the Navy’s Deputy Chief of Naval Operations for Fleet Readiness and Logistics Vice Adm. Philip Cullom and Director of Unmanned Warfare Systems Rear Adm. Robert Girrier.

In October, the Marine Corps will host a logistics innovation event at Marine Corps Base Quantico to bring together labs and service logisticians from all the services to update on another on their efforts and find teaming opportunities.