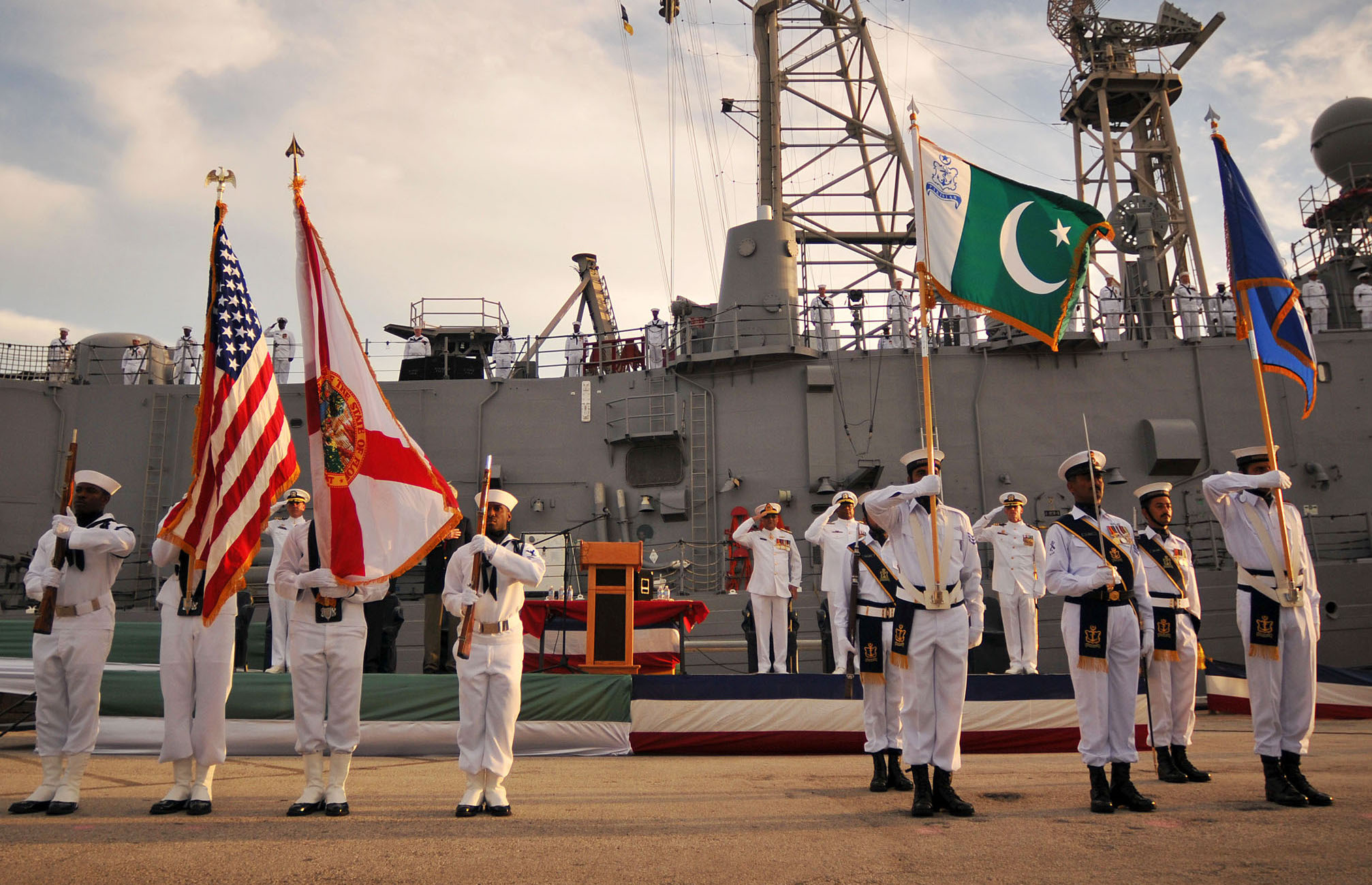 U.S. and Pakistan national anthems are played during the decommissioning ceremony of the guided-missile frigate USS McInerney (FFG-8) at Naval Station Mayport in 2010. US Navy Photo

When considering the future U.S. relations with Pakistan it’s important not to deal with Islamabad exclusively “through the lens of Afghanistan,” a Senate Armed Services Committee staffer said Thursday.

Anish Goel, a Senate Armed Service Committee staffer said speaking at the Heritage Foundation, a Washington, D.C., think tank, added he believed Pakistan would continue to be viewed skeptically on Capitol Hill when it comes to its counterterrorism efforts in the region.

He said it was likely that policies on dealing with Pakistan formed by the administration of President Barack Obama would continue after the inauguration.

While he said he was “cautiously optimistic” about this relationship, Goel said Congress’ putting some limitations on the money it appropriated for Pakistan’s use to improve its military capabilities in fighting terrorism would remain in place and could be tightened.

“Many members believe we’re not getting the kind of cooperation” expected in countering the Haqqani Network’s and Taliban’s fighting forces in Afghanistan. “We would hope it goes in the other direction” and Islamabad realizes that the United States is going to be a legitimate partner in the future “no matter what happens in Afghanistan.”

“Afghanistan is perpetually a news item on Capitol Hill” from troop levels to how the war is going. “Everyone is trying to figure out how do we go forward” while the “senators [on the committee] are very supportive of the continuing the mission” to stabilize the country.

Goel said he is “cautiously optimistic” that military and economic ties between India, Pakistan’s rival, and the United States will continue to improve in the years ahead.

At the session with congressional staffers who focus on Asia, Hunter Strupp, an analyst with the House Foreign Affairs Committee, said the United States has “warming ties” with Vietnam and Burma because of China’s push to extend its territorial claims in Southeast Asia.

At the same time, Rep. Ed Royce, (R-Calif.) and chairman of the committee, has expressed concerns about human rights abuses about both countries, as well as what might happen in the Philippines when Rodrigo Duterte takes office there at the end of the month who has promised a crackdown on crime.

“What to do about an increasingly belligerent North Korea” remains a question searching for answers for the incoming administration and Congress. He said the committee applauded the targeting of Pyongyang’s money laundering schemes by the Treasury Department with new sanctions and those tougher sanctions imposed by South Korea and Japan.

He added there has been “a distinct change in attitude” on the part of South Korean political leaders about installing Terminal High Altitude Area Defense missile systems to deter Pyongyang.

“I don’t think there’s anything new about [American] naval or military presence” in the Pacific, Eric Sayers, also a staffer on the Senate Armed Services Committee, said. In a way stressing that presence as something new, “plays into the [Chinese] narrative” that the United States is the aggressor in the South China Sea.

He said a ruling is expected in a week or so on the territorial dispute between the Philippines and China in that waterway and it is unclear what Duterte would do after it is announced.

The larger question is “just what can we do” to deter Chinese ambitions that have been growing since it began reclaiming coral reefs and turning them into artificial islands. Some of these reclaimed reefs have air strips and military depots to project Chinese power out to its so-called “9-Dash Line.” Sayers said the onus is on the United States to identify specific areas “where Beijing should be careful and not make a move.”

Looking at the new administration under President Tsai Ing-wen in Taipei, he said Taiwan’s current defense spending at 2.1 percent of gross domestic product “doesn’t match up to growth across the strait.” He said that it needs to invest more in defense and not just to cover increased personnel costs as it moves to an all-volunteer force.

As for where to invest, he suggested anti-surface weapons not only submarines, but to include mines, land-based missiles and fast patrol boats that it is already building on the island while at the same time discarding legacy systems that are difficult and costly to maintain and overmatched.

He also emphasized the importance of Taiwan using its opportunities to train with the United States and receive advice from American military experts in tactics and operations.

Reflecting on a recent congressional delegation visit to Asia, Sayers said leaders there had “lots of question marks on policies” that Donald Trump, the expected Republican nominee for president, would pursue in the Indo-Pacific.

He added that Sen. John McCain, (R-Ariz.) and chairman of the Senate Armed Services Committee, believes now is the time for a new Global Force Posture Review, taking into account what Russia is doing in Eastern Europe, an expansionist China, an unpredictable North Korea and a volatile Middle East. The last such review was conducted in 2004.