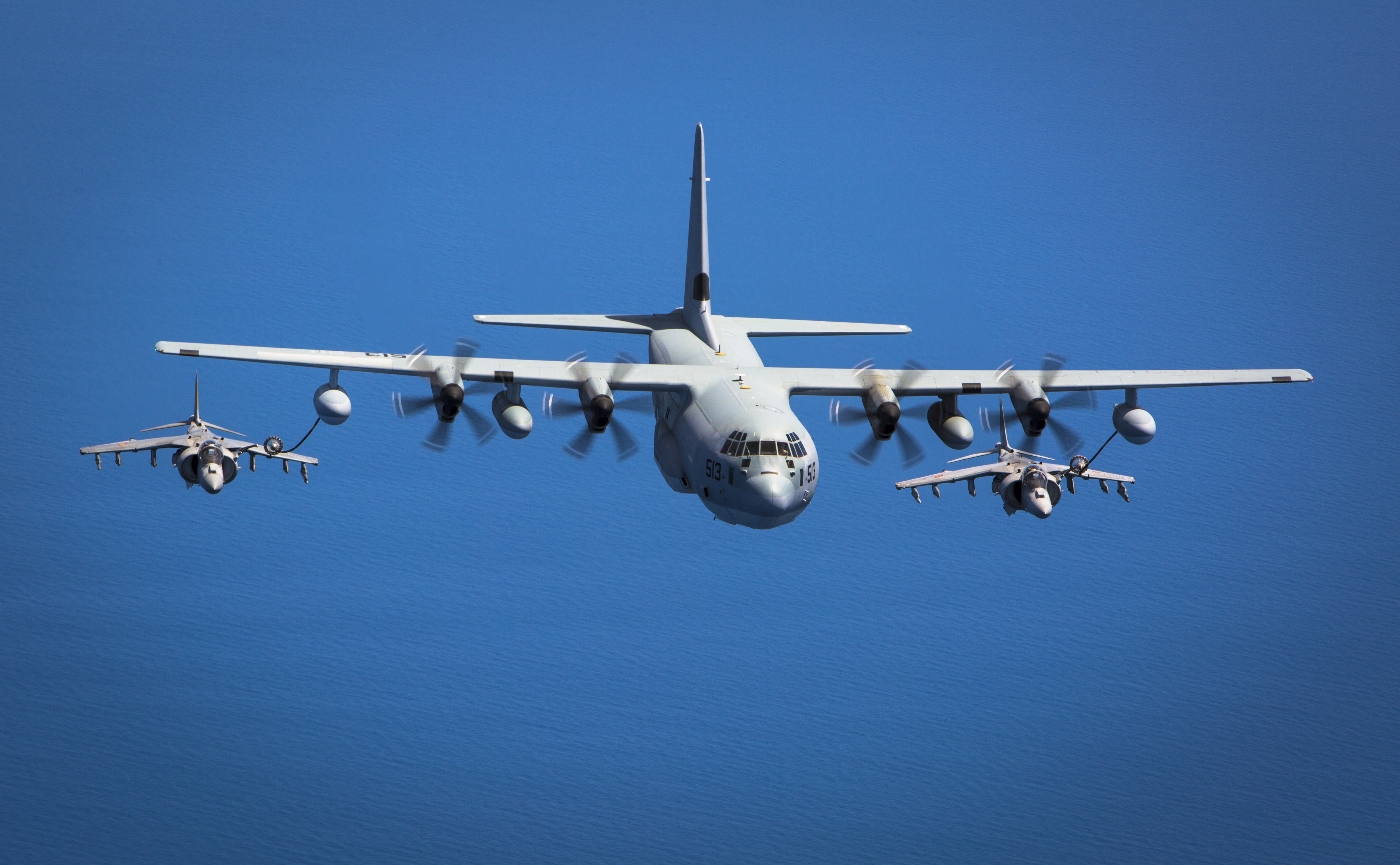 Lt. Gen. Jon Davis said the Marines’ next aviation plan would include upgrading all 79 C-130Js into Harvest Hawk-capable platforms. The Hercules Airborne Weapons Kit (HAWK) includes both modifications to the plane – the installation of a new MX-20 sensor ball with a laser designator on the nose of the plane, and the Intrepid Tiger electronic warfare pod – as well as a supply of Hellfire, Griffin and Viper Strike missiles for precision strike. The Intrepid Tiger pod is already installed on the AV-8B Harriers and F/A-18 Hornets, and the Marine Corps intends to put the pod on the C-130Js, V-22s and H-1 attack helicopters. Davis said the pod is a “great capability, gives us a jamming capability, an electronic warfare capability for not only [self]-protection but more importantly that people on the ground can manipulate and operate. It’s open architecture so they can control the weapon system from the ground.”

Davis said 10 C-130Js had already been modified with the initial Harvest Hawk kit and would receive the upgraded sensor ball, and the rest of the fleet would go through the full Harvest Hawk modifications under the Marines’ next aviation plan, which is being developed now.

The aviation plan will also outline what Davis called an “Osprey Hawk,” which would provide the same improved sensor ball with laser designator, jamming pod and laser-guided munitions, as well as the V-22 Air Refueling System (VARS) to allow the Osprey to refuel other aircraft in the air.

Davis said the strike capability will be important for the V-22, which is in high-demand and being used in ways its current configuration is not optimized for.

“We have a weapon system called Switchblade, which is a gravity-drop system (with laser-designation guidance), and guys were throwing that out of the back of the V-22 and get a precision hit on a target out there from a V-22,” he said of a previous demonstration. “So if I’ve got a sensor ball with a laser designator, I can throw something like a Switchblade out the back. Right now we have a belly gun, I think the belly gun is relatively ineffective for what we’re trying to do, but you could put a laser rocket like the APKWS (Advanced Precision-Kill Weapon System) on the V-22, or a precision-drop weapon, gravity drop weapon like a … Viper Strike.” 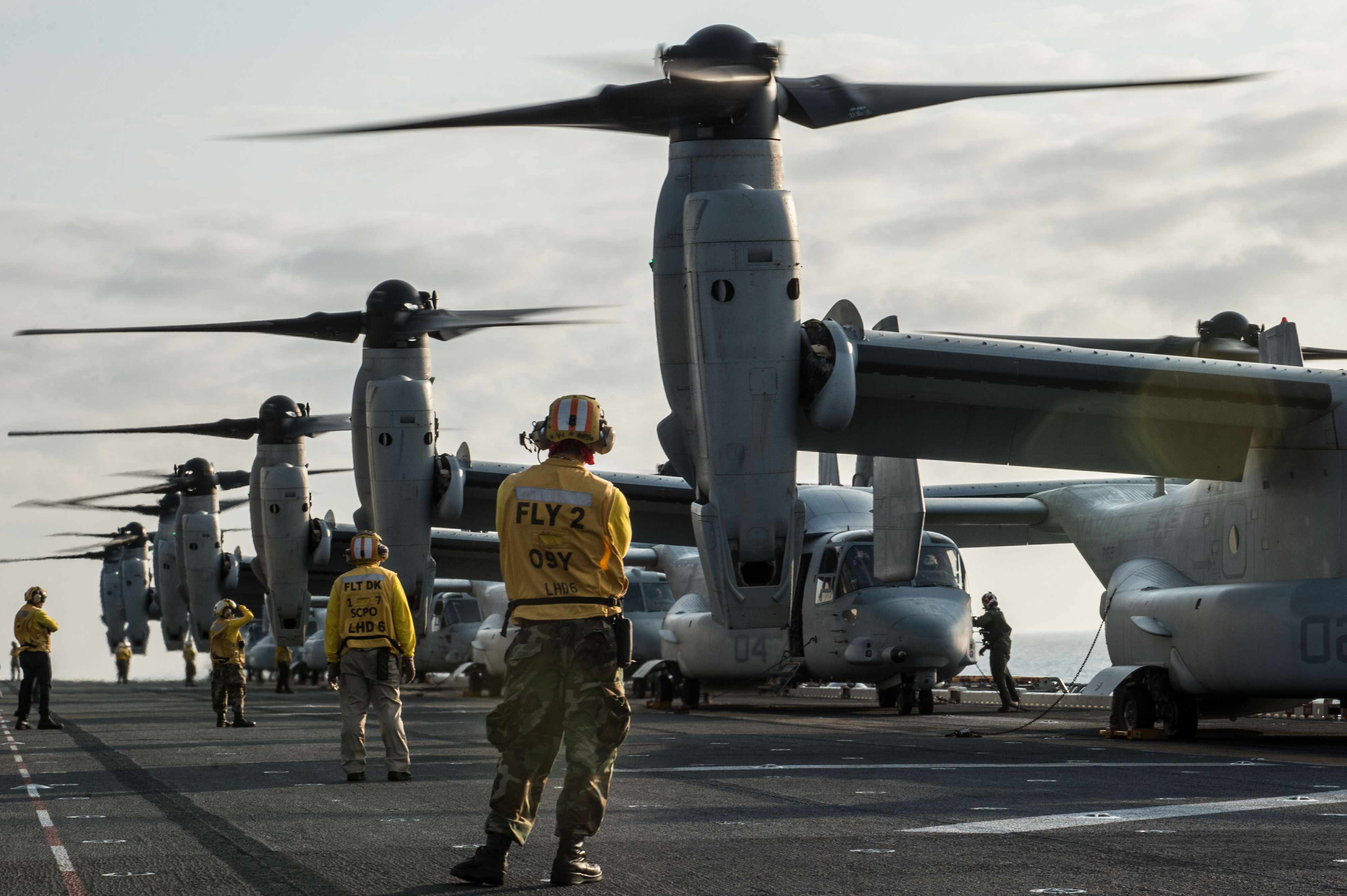 For the V-22, the most obvious “Osprey Hawk” benefit is the much-improved strike capability. For the C-130J, the transport and tanker airplane would become a multi-mission craft, with the sensor ball allowing for route reconnaissance missions when needed.

But Davis said the improved sensor ball would bring other important benefits as well, chiefly improved safety while landing.

“I can make a case for having a sensor ball on the nose of the airplane from the safety of flight perspective, looking at your landing zone, especially at night,” Davis said. “These are strategic airplanes for us, for moving men and material all around, and … I can’t afford to break one, and so having the sensor ball in there” will be important, he said of the C-130J fleet. The Air Force has done serious damage to some of its planes by landing on a runway the pilot couldn’t see were broken, Davis said, and the Marines cannot afford to lose a plane that plays such an integral role in forward presence and sustainment. The upgraded sensor ball in the improved Harvest Hawk package would help avoid this scenario by providing a better view of the landing zone.

The improved sensor ball would also magnify the landing zone, which the FLIR ball on many Marine aircraft does not do.

“Right now the FLIR on the V-22 is a one-to-one FLIR, it doesn’t magnify the LZ (landing zone), it doesn’t help the pilots look. We lost one in Hawaii – if they had been able to zoom in on the target at range and say hey, the LZ’s not big enough, or there’s a fence there or whatever, let’s move over here,” then lives could have been saved, Davis said. “So to me it’s a great capability and again allows the Marine Corps to position these platforms to be multimission platforms.”

Davis said the timeline for the Harvest Hawk and Osprey Hawk upgrades were unclear. Three vendors are interested in competing for the FLIR replacement sensor ball, he said. Those companies will demonstrate their capabilities, and the results of the competition will be fed into the Marines’ technology insertion plan for the C-130Js and the V-22s.