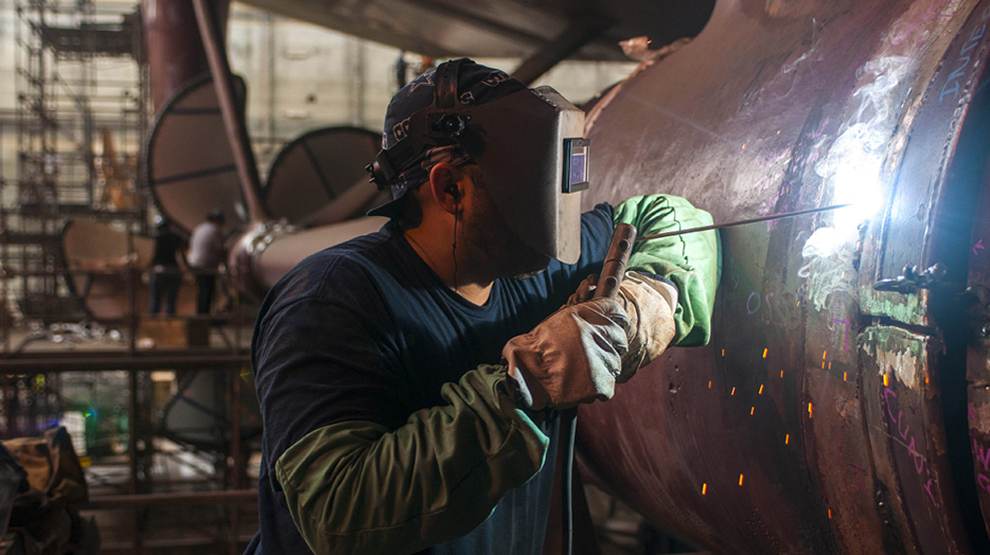 An undated photo of a worker at Norfolk Naval Shipyard. US Navy Photo

The Naval Sea Systems Command “is well down the road to recovery” in rebuilding the Navy’s shipyard civilian workforce, but there is a bow wave of experience that was lost three years ago—through a long hiring and pay freeze and across-the-board cuts to facilities—that it has to overcome, the Senate Armed Services Readiness and Management Support subcommittee was told Tuesday.

Vice Adm. William Hilarides testified that the workforce has actually grown by 4,000 workers to 33,000. “Now training is the challenge,” and that includes bringing in contract civilian trainers to work with new supervisors on how to manage workers and production flow.

The Navy actually brought in about 11,000 civilian workers to its shipyards to cover natural attrition and overcome the yearlong hiring freeze brought on by sequestration in 2013. To speed the hiring (from the usual six-months from applying to actually being hired), he said the Navy streamlined procedures covering physicals and clearances in opening one-stop centers. He added the Navy remained careful about whom it hired because these employees tended to make a career of shipyard work.

“We specifically went after all those barriers,” he said in answer to a question.

“We use that data [on how long work is taking on different classes of ships and whether the work is hewing to budget] to make the case for hiring.” He said the command is just now starting to size Puget Sound and Norfolk, the two largest public shipyards, for a workload that includes refueling ballistic-missile submarines and overhauling nuclear-powered aircraft carriers, as well as maintenance on other warships.

Of the new workers’ quality, Hilarides added, “They do know their work directly affects global events.”

Members of the panel representing states that have public shipyards—Portsmouth (ME), Norfolk (VA), Puget Sound (Wash.) and Pearl Harbo (Hawaii)—indicated a willingness to re-examine temporary duty pay for workers on extended duty at other locations.

Hilarides said the exemption would apply to a very defined group of workers—such as welders away from their home yard for more than 30 days. “This is hard physical work. They are volunteers” often working 10 to 12 hours daily, he added, and they do not have the time to shop and cook in rented quarters, so they eat at the closest fast-food restaurants for convenience.

“We want them to go as a team” for three to six months, so the work can move more efficiently.

While it varies by bargaining unit, he said he believed that it was generally true because of the quirk in the TDY pay regulations the most qualified workers would more likely decline the extended away-from-home assignment.

Chairwoman Sen. Kelly Ayotte, (R-N.H.), noted that one of the consequences of the TDY pay regulation after 30 days was causing costs to rise because the work was taking longer and workers’ unwillingness to stay beyond a month, a point Hilarides made in a letter earlier this year.

Vice Adm. Dixon Smith, head of Installation Command, said in prioritizing risk to rebuilding infrastructure the Navy is exceeding the 6 percent modernization target set for its shipyards with funding at 85 percent of recommended spending and 100 percent to the nuclear facilities.

In looking at all other Navy facilities, “we’re not gaining ground.”

To meet the modernization standards set in 2013, as sequestration was beginning, Hilarides said would take 15 years. He added that new dry docks for Ford-class carriers and Virginia-class submarines would probably “do that just in time,” possibly 10 years after the first ships are commissioned.