What it came down to for senior service leaders in a Senate Armed Services Readiness and Management Support subcommittee hearing was having more missions than money, and what resources had to be moved around to pay for current operations.

For the Navy, Adm. Michelle Howard, vice chief of naval operations, said in her prepared testimony that it was “sustainment, restoration and modernization of existing buildings, piers, runways, hangars, utility systems.”

Later in answer to a question, she said priorities in shore infrastructure work are with the shipyards, to overcome delayed maintenance and extended deployments.

Those postponements and delays in caring for necessary infrastructure “eventually will have an effect” on other Navy programs, Howard said. Her prepared testimony said the Navy was funding infrastructure accounts at 70 percent against the Defense Department goal of 90 percent.

The Navy is paying down its readiness debt “more slowly than we prefer,” Howard said.

Gen. John Paxton Jr., assistant commandant, said the bill-payers in the Marine Corps are the non-deployed units. Using aviation as an example, he said, “We are flying the wings off the F-18s.” In his prepared testimony on the F/A-18 A and D model Hornets and the AV-8B Harriers, he said both are “suffering from shortages of aircraft availability due to increased wear on aging aircraft and modernization delays.” 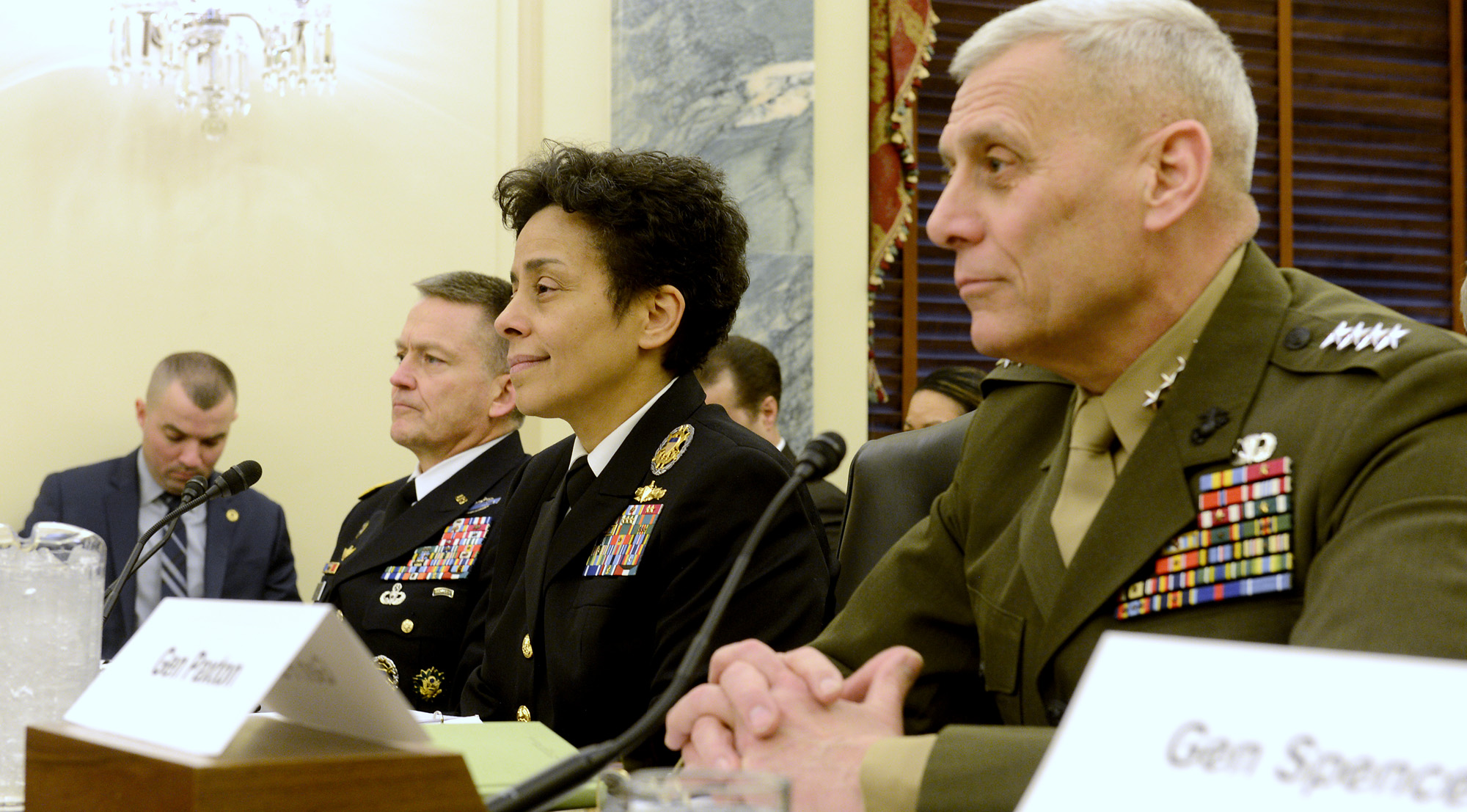 This shortage also has an impact on pilot readiness; flying time is lost because the aircraft are not ready, he said. In answer to a question about recent aviation mishaps and accidents, Paxton said pilots need “sets and reps,” a fitness and bodybuilding term to describe how often and how many times something is done.

The prepared testimony also noted that the Marine Corps’ average age of fleet air is 22 years, twice that of the Navy’s.

He told the committee about parts shortages for V-22 Ospreys and the impact of sequestration and government shutdown on the maintenance workforce for the aviation and ground force.

The Marine Corps is “not only mortgaging the future but the surge capacity.”

Paxton added, there “is no margin for error on [the] multiple missions” that Marines are asked to perform. In both his oral and prepared testimony, he said the high operational tempo is having an impact on Marines’ dwell time. The desired ratio is seven months deployed and 21 months at home. His prepared testimony put the ratio for many Marine at seven months deployed and 14 months at home.

Like the other service vice chiefs, both said the across-the-board budget cuts the Defense Department absorbed several years ago are still having an impact on today’s readiness and future modernization. “The ripple effect goes through the years,” Howard said. Paxton added, “We’ve not had a stable fiscal environment for three years.”

Looking ahead to 2021, Howard said, “If we have to fund the Ohio replacement [ballistic-missile submarine] out the topline, it will affect all” the Navy’s shipbuilding programs. Paxton said the impact will be felt in other programs other than shipbuilding, such as Marine Corps aviation, if the Navy has to draw on the department’s budget rather than a special national strategic fund to pay for the replacement submarines.

Howard, at the end of her opening statement, added that on Sept. 11, 2001 the Navy had more carriers, more than 300 ships and thousands more sailors than it has now, but “we are growing back.”