The Virginia-class attack submarine North Dakota (SSN-784) is rolled out of an indoor shipyard facility at General Dynamics Electric Boat in Groton, Conn., in Sept. 2013. US Navy photo.

WASHINGTON, D.C. –The Navy will reexamine the assumptions behind its 308-ship requirement, as the operational landscape has changed drastically since the previous Force Structure Assessment (FSA).

The Navy released a new FSA in 2012 and amended it in 2014, but Navy leadership and combatant commanders have expressed concern in the past week that previous assumptions about how many surface ships and submarines are needed to counter global threats are proving inapplicable to today’s world. For example, the Navy has a standing requirement for 48 attack submarines, but combatant commanders say they are only receiving about 62 percent of the subs they need to meet growing threats in Asia and Europe.

Chief of Naval Operations Adm. John Richardson said Friday at a Brookings Institution event that the 48-sub requirement is based off of analysis from 2006.

Last year the surface navy community expressed concern that a growing missile threat, particularly from China, would require an increase in the large surface combatant fleet above the stated requirement of 88. This year, the focus in congressional hearings and Washington-based events has been on the attack submarine fleet.

Navy Secretary Ray Mabus said at the Brookings event that the Navy would reach its 308-ship requirement by 2021 and that budget decisions being made now would affect the shape and size of the fleet in the years beyond that. Mabus more than doubled shipbuilding in his seven years as secretary compared to the previous seven-year period, and several classes are in serial production today – but with a projected shortfall in the attack submarine fleet, an ongoing shortfall in the amphibious ship fleet, ever-growing demand for ballistic missile defense-capable cruisers and destroyers, and the need for smaller ships to conduct partnership-building activities, the shipbuilding budget has been strained to keep up.

Richardson said at the event that, despite the many needs the Navy has, the service is aggressively looking at ways to build more attack submarines.

“It’s also been pretty well known that even with that 48 (submarine) requirement we’re going to dip below that as the Los Angeles-class submarines come out of the inventory faster than the Virginia-class is coming in. And so managing our way through that trough, if you will, has been a topic that we’ve been watching closely and doing everything we can to mitigate that,” he said.
“That’s becoming a more urgent situation, and so we are examining everything that we can, working closely with the industrial base, with leadership in the department and in Congress, to see that we’re not missing a trick to mitigate that trough.”

During a House Armed Services seapower and projection forces hearing Thursday, Navy acquisition chief Sean Stackley told lawmakers that the Navy is working closely with industry to make the Ohio Replacement Program ballistic missile submarines – a $100 billion program in design now and set to begin construction in 2021 – as affordable as possible so that perhaps the savings generated could be used to buy an additional attack submarine in 2021. 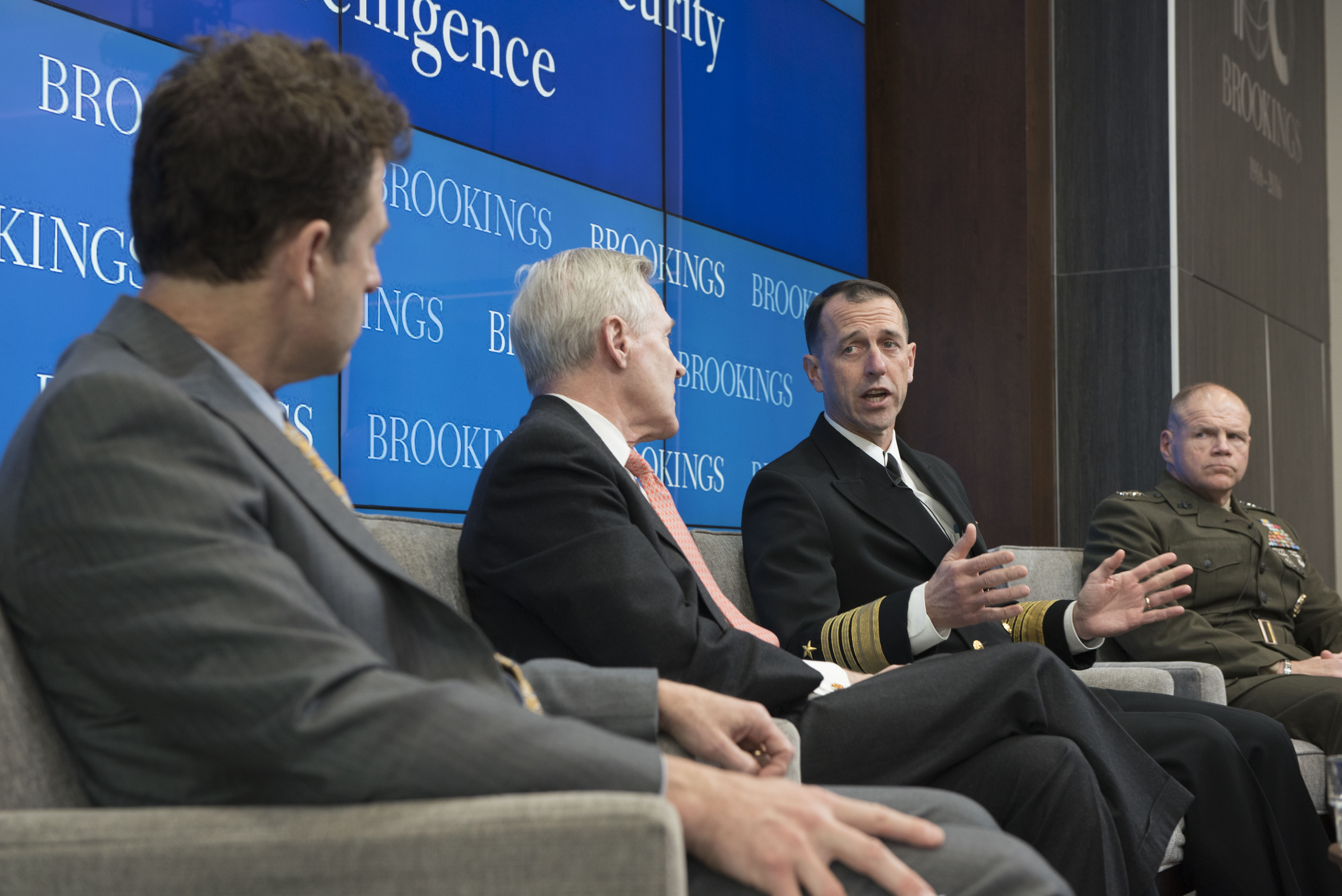 Chief of Naval Operations Adm. John Richardson speaks on maritime military strategy at the Brookings Institute in Washington D.C. with Secretary of the Navy Ray Mabus and Commandant of the Marine Corps Gen. Robert Neller. US Navy photo.

Also discussed at the Brookings event was the amphib shortfall – the Marines have 30 today, with a requirement for 38. Though the Navy and Marine Corps have worked hard to find alternative platforms to put Marines on, global threats are growing faster than the Marines’ ship count.

Commandant of the Marine Corps Gen. Robert Neller said at the event that the Marines needed a ship in the Mediterranean, rather than solely cover Europe and Africa with the land-based Special Purpose Marine Air-Ground Task Force (SP-MAGTF).

Mentioning the new expeditionary mobile base USNS Lewis B. “Chesty” Puller (T-ESB-3), which is destined for the Middle East when the ship makes its maiden deployment late this year or early next year, Neller said he wanted that ship for his European SP-MAGTF.

Neller said having more amphibs and alternative ships to move Marines around is important because Marines are distributed over great areas and crises can pop up quickly. In Asia in particular, though, Neller said the need for ships is also about self-preservation.

Discussing the growing missile threat in the Pacific, he said “the survivability you mentioned because of the missiles, when we did the (Pacific) laydown and the plan, the capability that our potential adversaries have didn’t exist. So do we need to look at how we’re going to harden ourselves? Do we need to look at where we’re going to position ourselves? Ideally I think you’re much more survivable if you’re moving on a ship, and we’d like to be on a ship, so wherever we end up in the Pacific we have a requirement for mobility.”