A week full of news about Iran began with the crews of two U.S. Navy small boats being apprehended by the Iranian Revolutionary Guard Corps-Naval (IRGCN) forces and ended with the release of four Americans being held as prisoners in Iran.

The quick resolution of the small boat incident, and the prisoner swap with Iran, gave proponents of the P5+1 nuclear deal reason to celebrate, and critics of the deal more to fret about. Here is a breakdown of those recent events, and a few other under-reported stories regarding Iran.

USNI News provided updates regarding the small boat crews that were apprehended by the IRGCN after drifting nine miles into Iranian territorial waters off the coast of Iran’s Farsi Island. That minor tactical incident threatened to destabilize the implementation of the P5+1 agreement at a particularly delicate point. Fortunately, the situation was quickly resolved, and the crews were released with their equipment. While there is much room for criticism of the Farsi-based IRGCN force’s inept handling of the incident, there is little doubt that the American sailors would still be “guests” of Iran if not for the improved diplomatic relations between the United States and Iran.

Other significant, and somewhat under-reported developments that took place recently with the Iran P5+1 deal include the removal of 25,000 lbs. of low-enriched uranium from Iran, and the dismantling of Iran’s heavy-water reactor at Arak. The Arak reactor, once capable of producing plutonium, was dismantled and disabled last week. This particular nuclear site was a major sticking point in the P5+1 agreement, and Iran’s compliance with defueling the reactor and filling it with concrete indicates just how far Iran was willing to go to implement the agreement. According to the IAEA, those two actions alone have tripled the breakout time for Iran to build a nuclear weapon.

Critics of the Iran P5+1 nuclear deal remain steadfast in their skepticism despite the positive trend of recent developments. Even critics agree that the agreement is achieving its main objective of preventing Iran from obtaining nuclear weapons. Despite this, opponents fret about possible secret programs, and worry about the infusion of cash into Iran’s economy when sanctions are lifted. What Iran does with this injection of $100 billion to 150 billion remains to be seen.

The motivation of at least one of the chief critics of this deal, Sen. Tom Cotton (R-AR), should now be questioned. It was reported last week that Cotton received a payment of nearly $1 million from the right leaning pro-Israel lobby group Emergency Committee for Israel just prior to his drafting the now-famous letter signed by 47 other Republicans and sent to Tehran without the approval of President Barack Obama. Actions such as that by political opponents in the United States set an early precedent that polarized the atmosphere surrounding the historic agreement. The unprecedented action by Cotton was viewed by many to be in violation of the long-held tradition that when it comes to foreign policy—politics stops at the water’s edge. At least for Cotton, it appears that financial support in the interest of a foreign power led to this breach of American tradition.

Many in the field of GOP Presidential candidates, while joyful that American prisoners were set free, were quick to oppose the prisoner swap that led to the release of the American prisoners in exchange for seven Iranians being held in American jails. The main criticism was that the prisoners should have been released without conditions. Florida senator and presidential candidate Marco Rubio worried that the “release of would only encourage U.S. enemies to take more hostages abroad” and Sen. Ted Cruz of Texas accused the administration of “negotiating with terrorists.” Whether or not Rubio and Cruz realize it, there is a historic precedence involving Iran, where these things did occur. 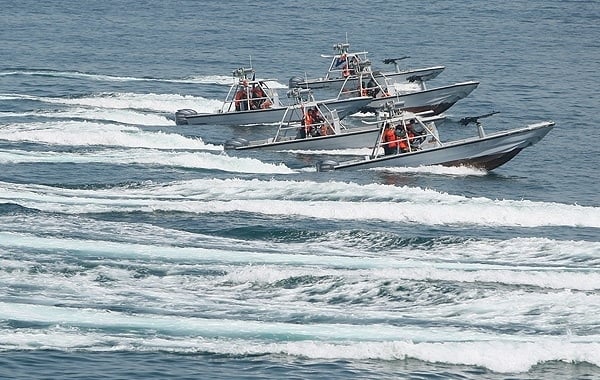 In 1985, President Ronald Reagan was so concerned for seven Americans being held prisoner by Iranian-backed forces in Lebanon, that he signed off on a secret arms-for-hostages deal. That deal would become public knowledge during the Iran-Contra Senate hearings. In this secret arrangement, the United States was trading missiles and spare parts to the Iranians, who were then mired in a horrific war with Iraq. In exchange for the weapons, Iran was encouraged to have its proxies in Lebanon free the American hostages. In one example, that is detailed in the CNO Professional Reading Program selection, The Twilight War (by David Crist), the United States had Israeli-chartered aircraft deliver 504 U.S.-built TOW anti-tank missiles for the release of one American hostage in Lebanon. Over the course of the arms-for-hostages deal Iran strung the United States along for all it could get, while the terrorists in Lebanon continued to nab American hostages when the opportunity presented itself.

In the stranger-than-fiction history of the Iran-Contra scandal, one can find a comparison and contrast with secret deals of the mid-1980s, with those being conducted in the full light of an international agreement. One can also find an answer to the question: What would President Reagan do in this situation? The answer is, he would be willing to compromise, meet conditions, and deal with the Iranians to bring American prisoners home. Reagan was willing to take this high-stakes risk to free American prisoners despite the still-fresh memories of the deadly Iranian backed bombing of the U.S. Marines barracks in Beirut just two years earlier.

In the Art of War, Sun Tzu advised that “To win without fighting is the acme of skill.” Thus far, the P5+1 agreement is looking like an excellent example that a better peace in the region can be achieved by playing diplomatic chess, rather than by bombing, or threatening to bomb Iran. For an America that has spent the post-Cold War era trying to solve every problem with a hammer, the nuances and compromises involved with achieving a diplomatic victory may take a while for some to get used to. “Cautious optimism” seems to be an appropriate phrase for the time being.