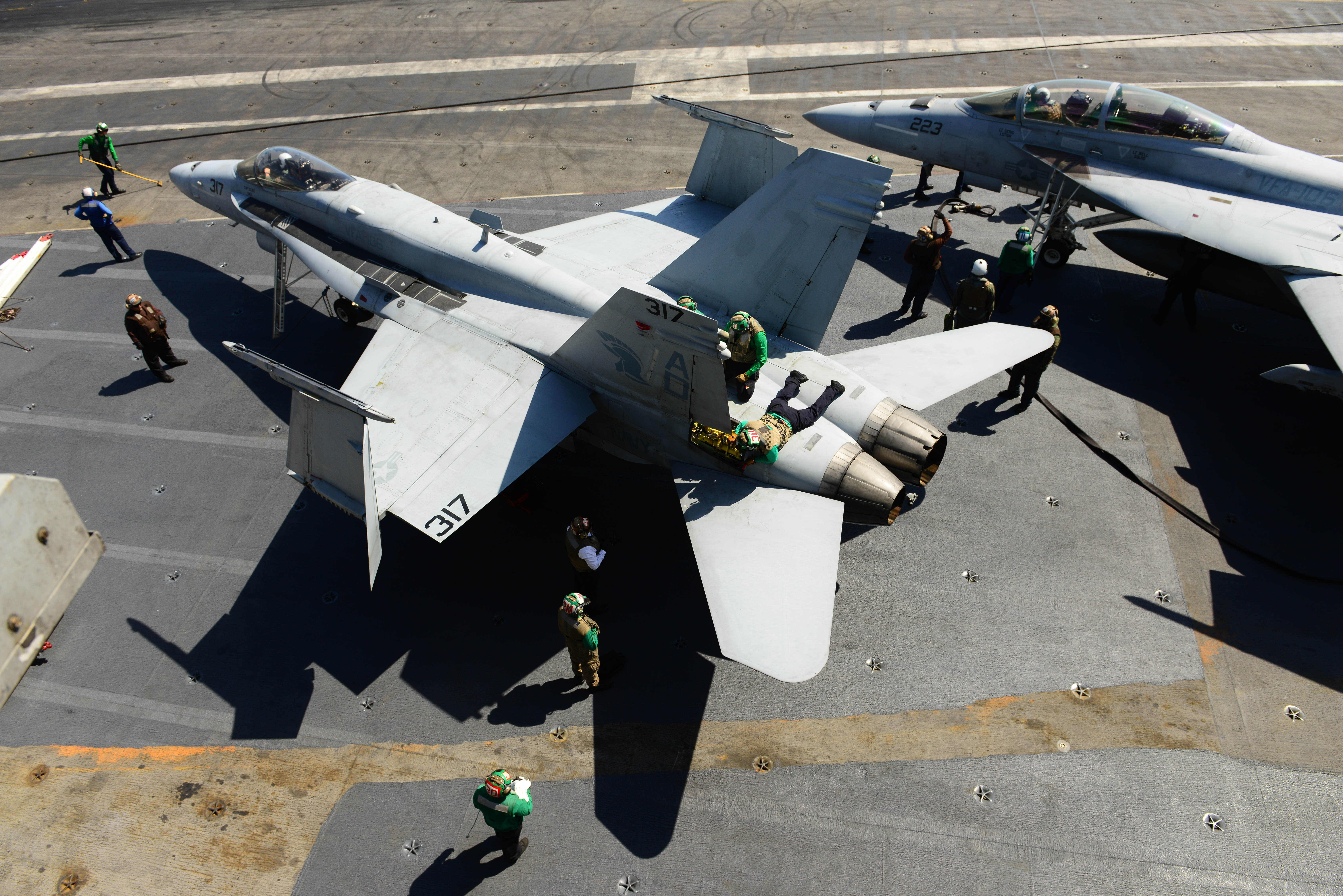 Sailors perform maintenance on an F/A-18C Hornet from the Romans of Strike Fighter Squadron (VFA) 106 on the flight deck of the aircraft carrier USS George H.W. Bush in April 2013. US Navy photo.

The Navy’s aviation depots have seen a 40-percent increase in fighter jet throughput since they changed how to approach repairing the legacy F/A-18C Hornets a year ago, the Navy’s director of air warfare told the House Armed Services Committee on Tuesday.

Rear Adm. Michael Manazir said in a hearing on aircraft carrier presence that the depots moved from a lean manufacturing model, which emphasizes rigid scheduling, to a critical chain process management model that emphasizes having the correct resources and allows for flexible scheduling.

“When we brought the initial bunch of airplanes into the depot, we applied a lean manufacturing model to the depot, and that means when you bring an airplane in you have a kit, you’re going to replace parts on the airplane – and the mechanic, the artisan takes the new part, replaces the old part, moves the airplane along,” Manazir explained.
“When we opened up these F-18Cs, given that we extended them past 6,000 [flight hours of service life], we found that there was so much corrosion and too much engineering work to be done. So in stride, we have changed that process to something called critical chain process management.

“We’ve been underway in that process now for a year, we have already increased the depot throughput by 40 percent,” he continued.
“We expect to get even greater than that, to where we have delivered somewhere along the lines of 30 airplanes from the depot a year ago, we’re looking to deliver 104 airplanes a year from now.”

Navy acquisition chief Sean Stackley added that the Navy hired extra artisans and engineers to help, and the service turned to Hornet manufacturer Boeing as a source of expertise and tooling to help accomplish the depot work more efficiently.

“We’re looking to pull the right levers to increase that depot throughput today, we cannot accept the numbers that we’re suffering through today,” Stackley said.

The Navy is facing a fighter shortfall of about 138 planes in the early 2020s for a couple reasons, Manazir said. First, “the extension of F-35 has caused us to have to extend the F-18C from 6,000 hours to 10,000 hours” of service life, and the depots were overwhelmed by the amount of work some airframes needed when they came in for the life extension efforts.

“We’re running into problems with corrosion internal to the airplane that we had not seen or planned for, because we hadn’t planned to go past 6,000 hours,” he said.
“So the near-term readiness problem is getting enough F-18Cs out to source our carrier strike groups that deploy. What we are seeing right now is, we have enough to send out F-18Cs on deployment, and we have less airplanes than we need in the earlier phases of our fleet response training plan. So we’re taking readiness hits there. So the forces back here at home cannot train enough because they don’t have enough assets. We are taking risks here at home to make sure that we have deployed assets.”

HASC readiness subcommittee chairman Rep. Rob Wittman (R-Va.) asked if accelerating F-35C production would help eliminate the need to extend the life of some of the legacy Hornets and mitigate the expected fighter shortfall. Manazir said the Navy could speed up the delivery of the planes themselves, but the Block 3F software will not reach initial operational capability until August 2018, and the airframe without the correct software won’t provide the Navy the capability it needs.

The second reason for the projected shortfall is that the Navy hasn’t procured enough extra F-18s to make up for running the planes – and the carrier strike group as a whole – harder than anticipated due to global demand for carrier presence.

Former Chief of Naval Operations Adm. Jonathan Greenert “testified a year ago that we needed two to three squadrons of Super Hornets to offset the attrition loss, the hours that we’ve flown those airplanes – that’s 24 to 36 airplanes. When you infuse 24 to 36 new airplanes into this mix, plus get the depot to be more efficient, that goes a long way towards getting at that strike fighter inventory management challenge, the shortfall, if you would.”