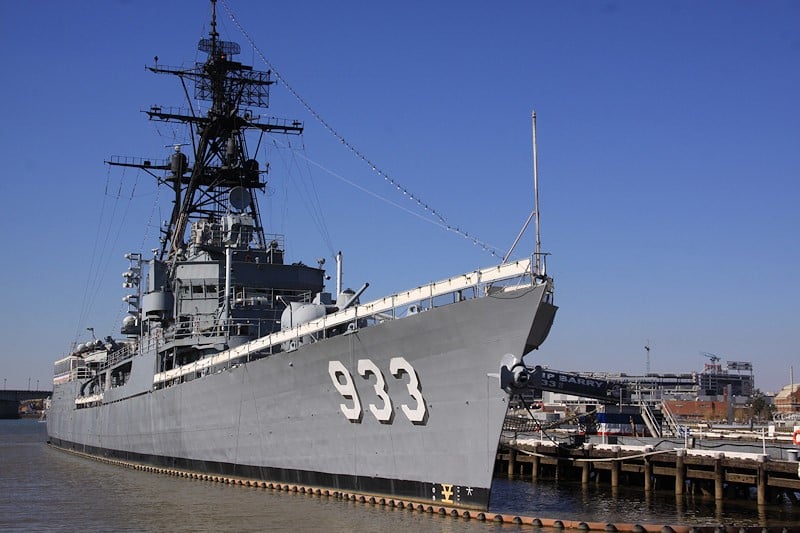 More than 50 former crew members, along with their families and local residents, gathered at Washington Navy Yard on Oct. 17 to remember the contributions of Display Ship Barry (DD-933).

The Forrest Sherman-class destroyer served in the Navy from 1956 until 1982, in both the Atlantic and Pacific fleets, and has continued serving the Navy as a public museum and training platform since 1983.

The Navy announced in February that the ship would be towed away and dismantled. A drawbridge near its Navy Yard home is being rebuilt next summer as a fixed-span bridge, and Barry would be too tall to sail under the bridge for hull maintenance the ship would eventually need.

Capt. Monte Ulmer, the commanding officer of Naval Support Activity (NSA) Washington, told USNI News in February that the ship was proven structurally sound in a hull survey last year but that it had not gone into dry dock for work since it was decommissioned. There is hull deterioration that would need to be addressed in the coming years, and it would be impossible to sail the ship under the new bridge without partially dismantling the ship at Washington Navy Yard – a complex and expensive proposition.

“It’s a sad day to see the Barry go, but I’m glad to be able to thank those in attendance today that served on the Barry,” Retired Rear Adm. Sam Cox, director of Naval History and Heritage Command, said during the departure ceremony, according to a Navy statement.
“She was not just a ship made of metal, but she represents a legacy of valor and sacrifice of those who served.”

Retired Sonar Technician (Surface) 1st Class John Horgan served on Barry in the early 1980s and flew in from Colorado for the ceremony.

“When I heard the ship was being scrapped I was very emotional,” Horgan said in the statement.
“I grew up on that ship. I came aboard 19 years old and left a man, so I had to make it here today.”

NSA Washington spokesman Brian Sutton told USNI News that the Washington Navy Yard staff had expected a smaller turnout, but the 175 chairs were filled and many more stood nearby for the ceremony. The crowd included 50 or 60 former Barry sailors, along with their families, other veterans and sailors, and nearby residents.

Sutton said he was surprised to have have “that kind of showing for a small destroyer that’s just been sitting in the Anacostia [River] for 30, 40 years.”

Over the summer, the Naval History and Heritage Command removed artifacts from the ship that it wanted to preserve. When the command was finished, other approved nonprofit museum ships sent representatives to the ship to see if there were any items that could supplement other displays around the country. Radios and other communication gear was a popular goodie to bring to other museums, Sutton said.

“Parts of the Barry are still going to be alive and well elsewhere” even after the destroyer is dismantled, he said.

Sutton said a request for proposals for the towing and demolition of Barry is set for this month, with a contract award planned for the first week of December. He said that in the past the company has come to tow away the ship within a matter of weeks, so Barry will likely leave Washington by the end of 2015.

The Navy has not yet announced any plans to replace Barry with another ship. Sutton said the vice chief of naval operations made the decision to scrap Barry and that a decision to put a new ship in at Washington Navy Yard would likely come from that office too.

The fixed-span bridge will be constructed next summer and will leave about 50 feet between the river and the bridge. The Navy could either decide to bring a newer decommissioned ship in that would not need repairs for many years – though the arrangements would have to be made in the next few months – or it could find a smaller ship like a patrol coastal ship that could fit under the new bridge with little to no modifications.