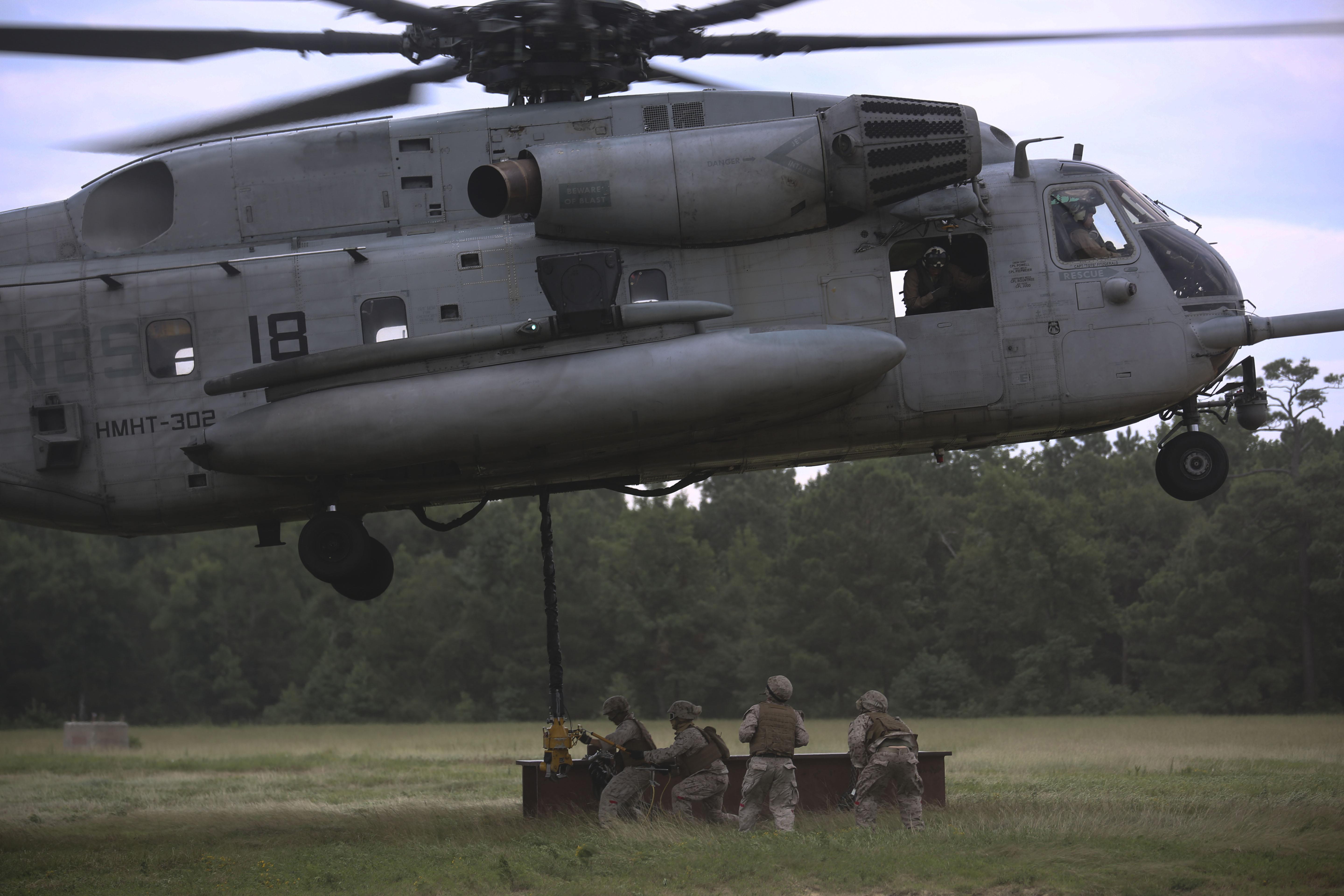 Marines with 2nd Transportation Support Battalion prepare to attach an 8,500-pound high beam to a pintle hook beneath a CH-53E Super Stallion during an external lift exercise aboard Camp Lejeune, N.C. on Aug. 25, 2015. US Marine Corps Photo

This post has been updated with additional information from II MEF.

One Marine is dead and nine others are injured following the hard landing of a Sikorsky CH-53E Super Stallion heavy lift helicopter during a Wednesday training exercise at Camp Lejeune, N.C., officials at the base told USNI News on Thursday.

“A hard landing is when an aircraft impacts the ground with a greater
vertical speed and force than a normal landing, typically after a rapid or
steep descent,” according to a release from II Marine Expeditionary Force (II MEF).

Of the nine Marines who were injured, four were admitted to hospitals, one was injured seriously and three others were in stable condition, II MEF officials told USNI News.

A total of 16 Marines were on the aircraft.

The identity of the dead Marine will be released pending notification of next of kin.

The Marines have begun an investigation into the incident and provided no additional details.

According to Naval Hospital Camp Lejeune (NHCL), one Marine was transferred
there via air MEDEVAC and was pronounced dead at the hospital. Seven
Marines were treated initially at NHCL; six have been evaluated and have
been released while one has been admitted and is in stable condition.
Additionally, four Marines were transferred to Onslow Memorial Hospital.
Three have been evaluated and scheduled for release. One Marine was reported
in stable condition and in transit to Vidant Medical Center in Greenville,
N.C.

A hard landing is when an aircraft impacts the ground with a greater
vertical speed and force than a normal landing, typically after a rapid or
steep descent. II MEF Public Affairs will provide updates once received and
confirmed factual.

“The command’s priorities are to make contact with the families of the
involved Marines as quickly as possible to provide them with the status of
their loved ones,” said Capt. Kendra Motz, deputy director of II MEF Public
Affairs. “We want to ensure the Marines and family members of the units
involved in the mishap have easy access to any help they may need after this
tragic event.”

The identity of our lost service member will be withheld until 24 hours
after next of kin has been notified. Our thoughts and prayers are with the
family during this difficult time.

The incident is under investigation and no additional detail is available at
this time.