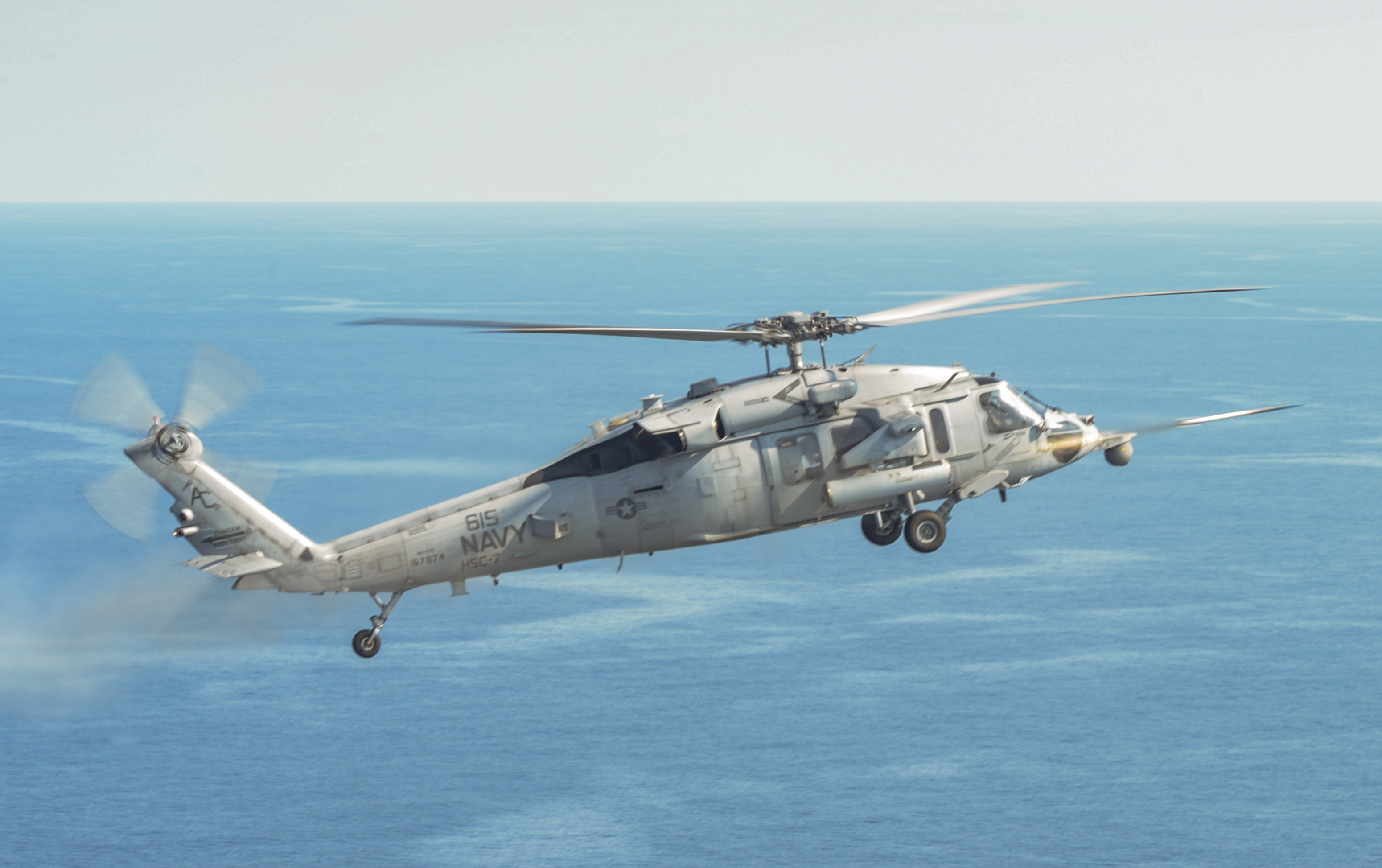 A MH-60S Sea Hawk helicopter attached to the Dusty Dogs of Helicopter Sea Combat Squadron (HSC) 7 fires an Advanced Precision Kill Weapon System II during a live-fire qualification exercise at a practice range off the Virginia coast. US Navy photo.

The Navy brought its Advanced Precision Kill Weapon System (APKWS) rocket guidance system to the Northeast this week, with the Dusty Dogs of Helicopter Sea Combat Squadron (HSC) 7 becoming the first in the region to test out the weapon.

HSC-7 tested the guided rocket system in an Aug. 17 live-fire drill for the first time, after West Coast units have already deployed with APKWS but the East Coast units had only been able to simulate the new tactics.

Lt. Erik Gustafson, tactics officer at HSC-7, told USNI News on Thursday that APKWS “fills in a very important part of the lethality gap in our weapons footprint,” hitting a sweet spot between the AGM-114 Hellfire missile and unguided 20mm cannons and 2.75-inch rockets.

APKWS is a laser guidance section that screws into the middle of 2.75-inch rocket, such as the Hydra rocket the Navy uses. The BAE Systems-built product went into full-rate production in 2012 and is now going through exercises and demonstrations in the U.S. Army and several international militaries. The idea behind the system is to provided a guided munition capability while leveraging what is already in militaries’ inventories and without requiring modifications to the aircraft.

With the Hellfire, the squadron gets a “big boom and pretty significant range and a high cost per round. So we have excellent standoff with that weapon, but it comes at a pretty significant price. And for our target set, it’s relatively significant overkill, to put it lightly,” Gustafson said of the primary ship defense mission.
“Ship defense is one of our major roles, so unguided weapons are an excellent reactive capability, but we talk about them bringing you into the knife fight – very close proximity, but very easy to turn on the bad guy and kill them quickly. So APK sits right in the middle of those two windows – they’re a guided weapon, so in some sense it’s a little bit more difficult to employ, but a higher reliability and a higher ratio of kills per round expended.”

Prior to Monday, the HSC-7 crew had only read about the tactics employed by the West Coast squadrons, so actually firing the guided rockets downrange was a great experience for the crew, Gustafson said. The rocket pods actually showed up before the training aids, he said, so the crew went out to see what they could do without having practiced in the simulator – and they hit 13 of 15 moving and static targets.

“All the stuff that we’ve done so far has been completely notional and just kind of imagining it. We’ve flown the profiles … but we’ve never actually seen the stuff on the screen and never actually had the pilot load it before. So this was that missing link, where we get to interface with the software and we actually get to send rounds downrange,” Gustafson said.

He noted that the APKWS capability does not replace any weapons or eliminate any previously used tactics, but rather augments what the MH-60S squadrons were already doing.

“We can take multiple shots with APKWS rounds as we proceed into the target, and then we can clean up with probably our 20mm cannon,” Gustafson explained.
“We can mix and match a variety of different weapons, but I think the common configuration you’ll see is a port-mounded 20mm cannon and a starboard-mounted LAU-61G/A, which is the new rocket pod we use to fire the APKWS rounds. So that allows us a good combination of mid-range strike and then close in to complete the engagement with 20mm. The major change in tactics is we now have the ability to service targets at any range very reliably.”

The Hellfire missile typically is effective up to 8,000 meters, he said, but is expensive. Unguided weapons are only effective up to 1,500 meters or less. APKWS gives pilots reliable accuracy between 2,000 and 5,000 meters.

“In general [firing a guided weapon] requires a bit more coordination to employ, but the tradeoff is we have a higher reliability and a greater standoff range,” he said.

Going forward, HSC-7 will get its ordnance personnel certified and put the rest of the squadron through initial training with a Naval Air Forces training team. Monday’s live-fire exercise marked the start of its work-up cycle in preparation for a deployment to the Middle East with the Dwight D. Eisenhower (CVN-69) Carrier Strike Group. In addition to training for the deployment, Gustafson said his squadron would work with HSC 5, 9 and eventually 11 to help them adapt the new weapon system.