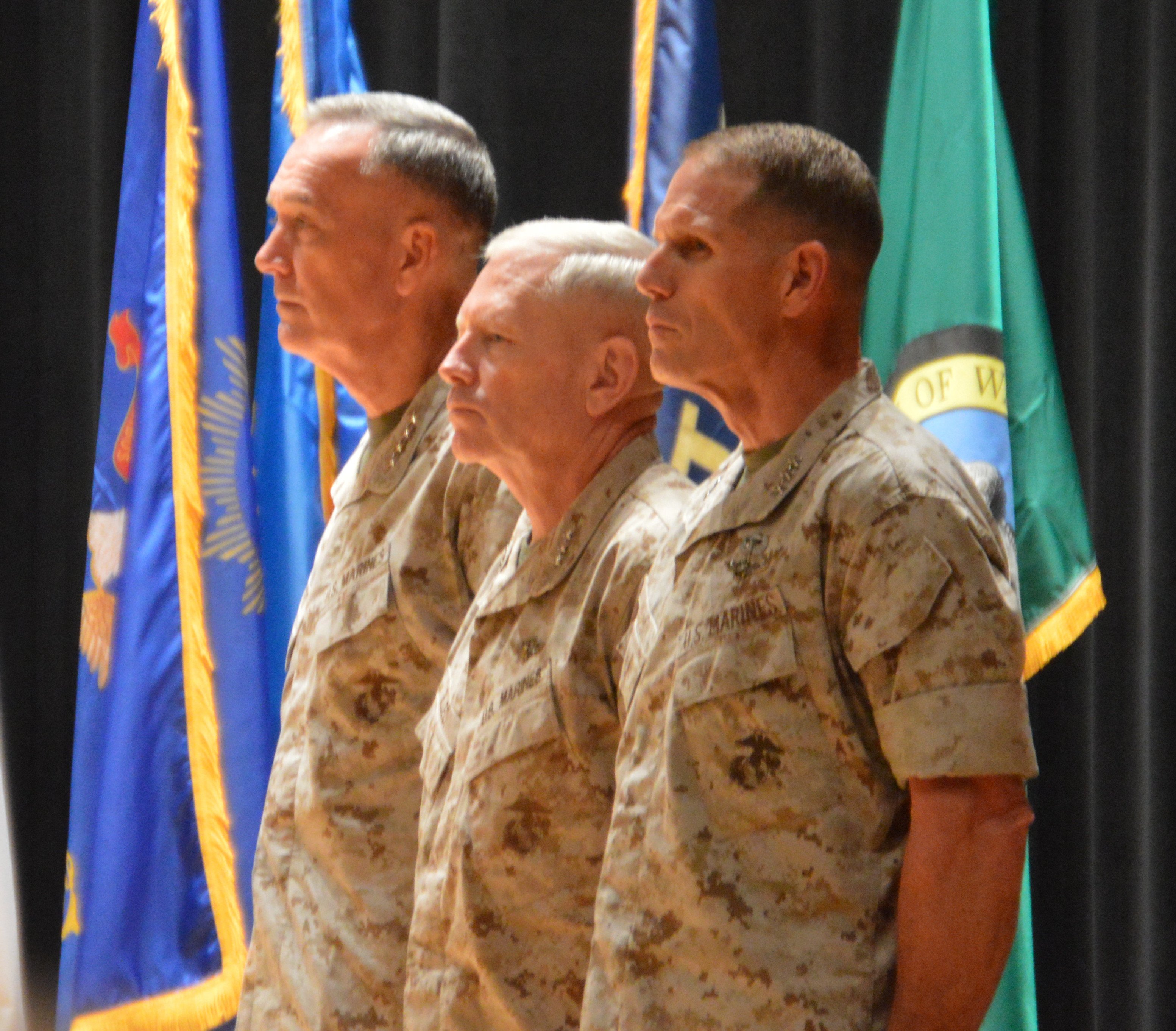 This post has been updated to clarify the full length of Lt. Gen. Glueck’s Marine Corps career.

MARINE CORPS BASE QUANTICO, Va. – As Commandant of the Marine Corps Gen. Joseph Dunford oversaw the change of command of the Marine Corps Combat Development Command Thursday, from Lt. Gen. Kenneth Glueck to Lt. Gen. Robert Walsh, the three officers reflected on the progress MCCDC has made over the past few years.

Glueck took command of MCCDC in August 2013, and the challenge for him was that the Marines were “coming out of two wars, one in Iraq and one in Afghanistan, so we had to once again get refocused on expeditionary operations,” he told USNI News after the ceremony.
“So to once again to get the institution – the whole institution – refocused on the requirements for being the expeditionary force of the nation for the future.”

Among the “big rocks in [his] rucksack” while commanding the Marines’ warfighting planners was creating “closer naval integration” between the Navy and Marine Corps, he said during the ceremony. He cited the Naval Training Plan as a way to not only capture lessons from exercises and experimentation, but to make sure those lessons are actually learned and incorporated into future operations.

“This training plan is going to allow us to be able to take the concept of seabasing, take all the different platforms that are being developed and bring them together, integrate them together as we move forward, and put it into a plan that will chart us for the next five years,” he said.

Glueck also cited the ground combat vehicle strategy as a major win for the Marines during his tenure at MCCDC.

“The one thing that the ground combat element has always been after was the fact that the ACE (aviation combat element) had a aviation strategy. I think now we actually have a ground combat vehicle strategy, essentially focused on the Amphibious Combat Vehicle,” he said, adding that the competition for the ACV was moving forward nicely, with the service likely awarding two contracts for the engineering and manufacturing development phase in the next few months.

Dunford addressed the ground combat vehicles during his speech, saying that “three years ago we were struggling with the ground combat vehicle portfolio, and Ken Glueck was able to put that together for us. … We will have the capabilities the Marines need in the future, and as well with the connectors the Navy is developing for us. Putting that together, our tactical ship-to-shore mobility is much healthier in the future than it has been.”

Glueck, who will retire from the Marine Corps next month after more than 40 years of service, also mentioned instituting the Commandant’s Planning Guidance, drafting the Expeditionary Force 21 guidance and operationalizing it via a capstone concept, and training and educating the corps as other major accomplishments during his tenure.

Whereas Glueck had to deal with turning the service’s focus from ground wars to expeditionary operations, Walsh told USNI News after the ceremony that his big challenge is that “it’s a pretty chaotic, uncertain world we’ve got out there.” With the varied and evolving threats, he said it was MCCDC’s job to figure out how to address them in accordance with the Commandant’s Planning Guidance, but he said he was excited to return to MCCDC because “we’ve got all the tools right here to be able to do that.”

Walsh, who was promoted to lieutenant general in a private ceremony before the change in command, served as deputy commanding general of MCCDC from June 2012 to July 2013. He said during the ceremony that he was excited to return to the place that integrates the whole process of combat development.