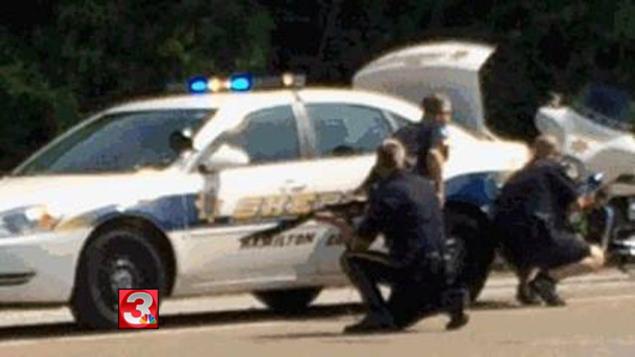 Four Marines were killed and three others — including a police officer — were injured in a series of Thursday shootings at a Navy support center and a joint recruiting station in Chattanooga, Tenn., the U.S. Marines annouced on Thursday.

“The Marine Corps can confirm four Marine fatalities today at the Navy and Marine Corps Reserve Center in Chattanooga, TN. Names of these Marines will be released upon notification of the next of kin,” read the statement.
“We can also confirm one Marine Corps recruiter sustained a wound to the leg while working at the Chattanooga recruiting office. The recruiter was treated at a local hospital and has been released.”

The suspected lone shooter is believed to be dead following the two incidents that began about 11:45 A.M. EST and lasted for about 30 minutes.

The four Marines were killed at the Naval Operations Support Center Chattanooga, which primarily serves members of the Navy Reserve in the region, on the second stop in the spree.

Several news agencies identified the shooter as Muhammad Youssef Abdulazeez. The FBI and local authorities are continuing to investigate the incident and have not ruled out any motivation for the shootings.

“We have not determined whether it was an act of terrorism or if it was a criminal act, FBI Special Agent Ed Reinhold said during a Thursday press conference.