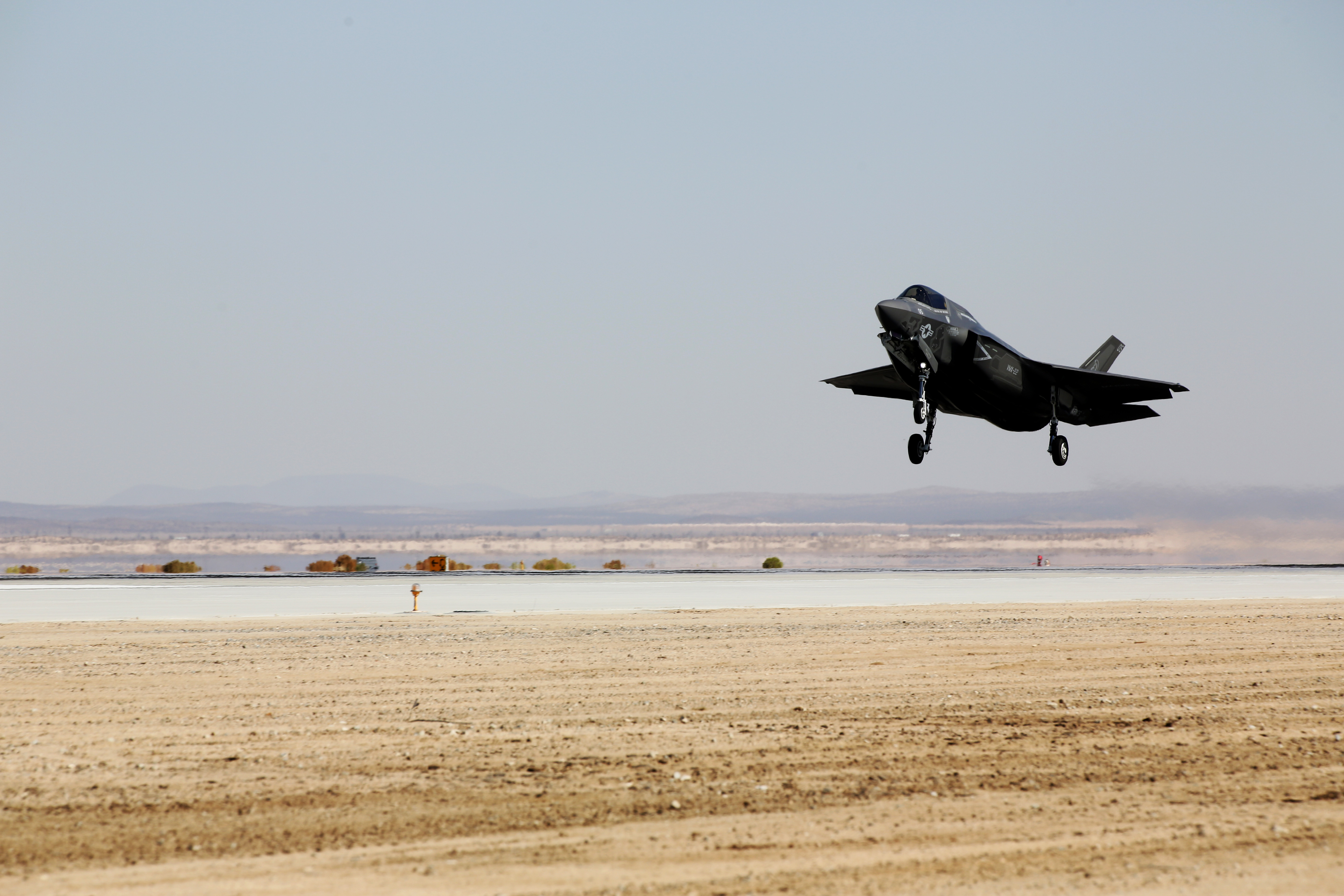 A previous version of this story indicated the U.S. Marine Corps flies F/A-18 E/F Super Hornets. In fact, the USMC flies the F/A-18 C/D Hornet. The post has been amended.

The ORI for the first F-35B squadron, Marine Fighter Attack Squadron (VMFA) 121, is scheduled to begin today and will last four or five days. An inspection team – with members from Headquarters Marine Corps, the Marine Aviation Weapons and Tactics Squadron One (MAWTS-1) school and the Marine Fighter Attack Training Squadron (VMFA-T) 501 – will “assess them from a maintenance perspective, a sustainment perspective and an operations perspective,” deputy commandant for aviation Lt. Gen. Jon Davis told USNI News on July 8.

“We have a team of about 12 people going out to assess everything from maintenance to NATOPS (Naval Air Training and Operating Procedures Standardization) knowledge,” he said.
“There’s 10 items on a Commander of Naval Air Forces inspection, maintenance inspection; we’re going to go out and out of those 10 say, give us these five. And then we’ll look and if there’s problems with those five we’ll go deeper.”

In addition to that maintenance test, the ORI will also include assessments of five areas of flight operations with live ordnance at up to a division-level context. The last day will be a “surge day,” during which every person in the squadron will be involved in a mission set either on actual planes or in a simulator.

At the end of the week, Davis will meet with the assessment team in person to go over the results.

“we’ll assess, we’ll take a look, we’ll look for the goods and the others,” he said.
“And then what I’ll do is I’ll look in the aggregate about the requirements for this squadron being able to go to war with an F-35 and sustain operations from a deployed base, and I’ll make a recommendation to [Commandant of the Marine Corps Gen. Joseph] Dunford based on what I see out there, and he’ll either declare IOC or he won’t.”

“Do we have the depth in supply to support a combat deployment?” he said.
“If there’s any one area I’m worried about, it’s that.”

When Davis became deputy commandant for aviation last year, he said he had a chart with the status of 14 different areas, color-coded green, yellow or red based on their readiness levels.

“When I got here a year ago … there was not a lot of green, a lot of yellow, some red. That chart right now is pretty much all green. Still a little bit of yellow in spares, we’re going to assess that. But for the most part we’re in good shape.” 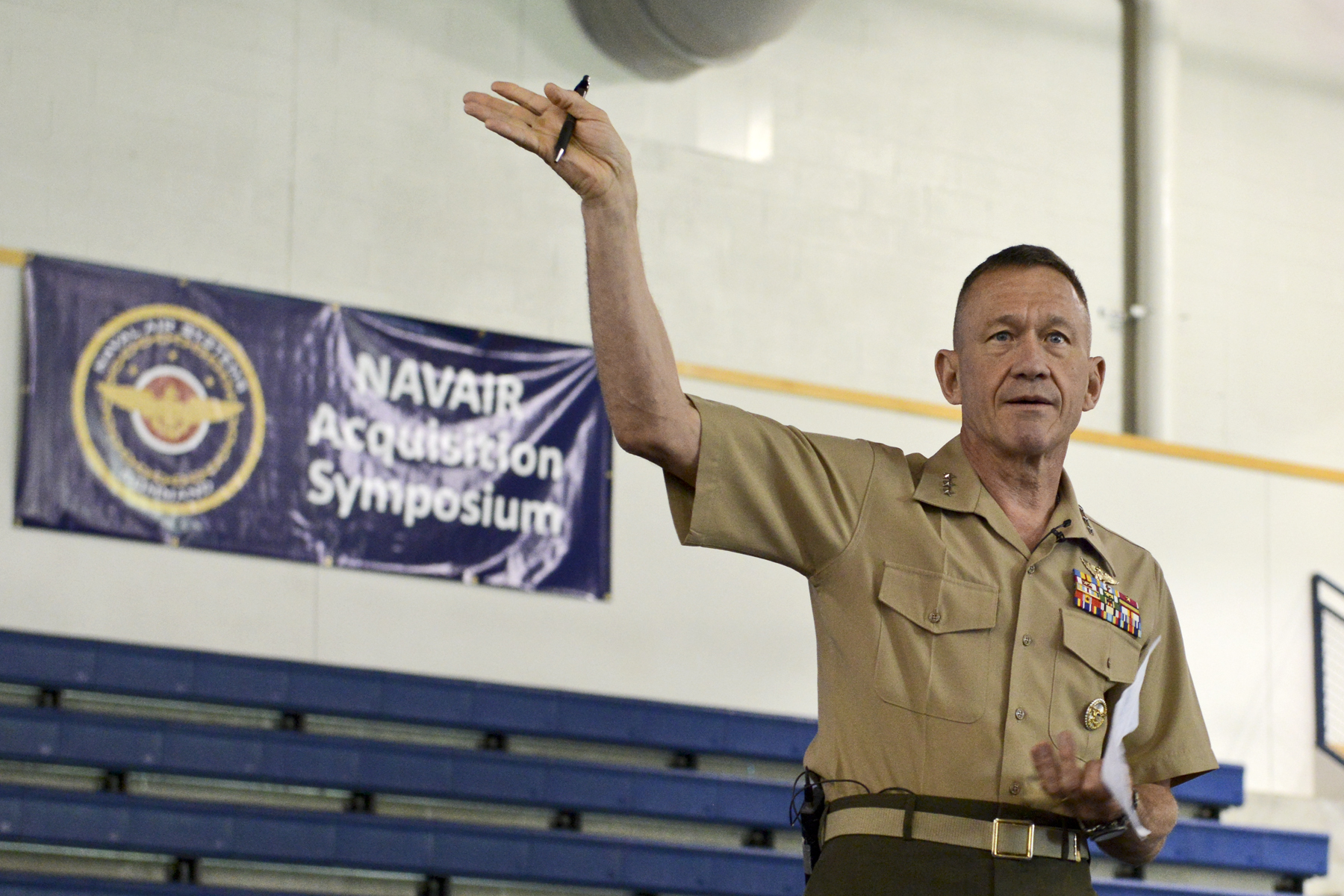 He said the crews are well trained and the aircraft itself brings a greater capability than the Marine’s legacy F/A-18 Hornets, AV-8B Harriers and EA-6B Prowlers it replaces. But the logistics supply chain needs to be solid because once Dunford declares IOC, the first squadron could deploy at any time.

“Just like the V-22, we declared IOC in 2007; a couple weeks later, we deployed to Iraq right away,” Davis said. VMFA 121 is set for a permanent change of station to Japan in January 2017, but they could potentially deploy sooner if called upon. Therefore, Davis said, his threshold for recommending an IOC declaration is, “could we take this squadron and go over to the Middle East tomorrow after Gen. Dunford declares IOC, yes or no?”

Davis said he would not prejudge the results of the ORI, but he expects the squadron will prove ready for IOC. During operational testing aboard USS Wasp (LHD-1), JSF-trained pilots worked alongside the ship’s crew that had never worked with the aircraft before, creating a steep learning curve for both the Marines and the sailors onboard. But Davis said everything went well – they flew all required test points, qualified all pilots for day operations, qualified some for night operations, and trained some of the landing safety officers and deck crew for future JSF operations.

The Marines even flew an F-35 engine out to the ship on a cradle slung under an MV-22 Osprey, which many believed would be challenging if not impossible to do, Davis said.

After dropping live ordnance earlier this month, all that stands between the F-35B and its introduction to the fleet is the ORI – an assessment that comes from the British military. Davis said he did an exchange tour when he was a captain, and before certifying the first GR5-variant Harrier squadron, an assessment team came in to ensure the squadron could meet the full range of NATO requirements. Davis said he liked the idea of having one last check from those who know the program best before officially green-lighting the squadron, and he decided several months ago to bring the tradition to the U.S.

“A lot of people said, or had conjecture, that the Marines, me, were just going to declare IOC regardless. You have 10 jets, you’re going to declare,” he said.
“We have a very stringent requirement for what the airplanes are able to do, and we were hell-bent on measuring and making sure we had what we said we were going to have in order to declare initial operating capability.”