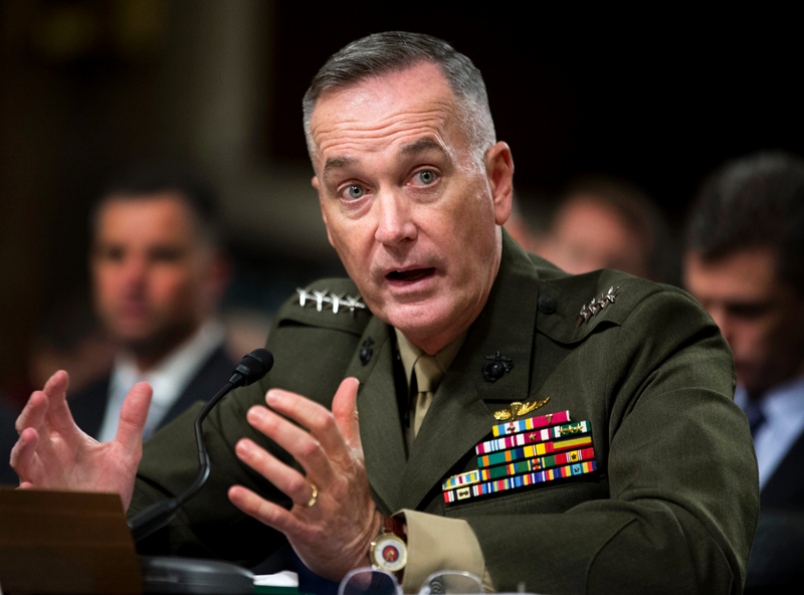 NATO and the U.S. need new tools to deter increasing Russian aggression as conflict in Eastern Ukraine continues to rage, said Marine commandant Gen. Joseph Dunford during his Thursday nomination hearing to serve as the next chairman of the Joint Chiefs of Staff.

Labeling Russia as “the greatest threat to our national security” and calling their actions “nothing short of alarming” Dunford said the U.S. and NATO needed 21st century deterrence models to counter the Kremlin’s recent hybrid strategies of political and unconventional warfare in Eastern Europe — notably Ukraine.

“Our experience in Ukraine… highlights that we need to update our deterrence and response model to deal with the type of threat we have today,” he told the panel.
“Quite frankly that needs to be a priority.”

In 2014 — during the political instability following the ouster of former Ukrainian president Viktor Yanukovych — Russia seized Ukraine’s Crimean peninsula via a political appeal to Russian-speaking residents and by allegedly dispatching insignia-free troops — so-called “little green men” — into the region to back up the Kremlin’s political machinations.

“That asymmetric threat will be one that we continue to see in the future and in the European context,” Dunford said.
“In Russia we have a nuclear power. Not only one that has the capability to violate the sovereignty of our allies and to do things that are inconsistent with our national interest but they are in the process of doing so. If you want to talk about a nation that could pose an existential threat to the United States, I would have to point to Russia and if you look at their behavior, it’s nothing short of alarming.”

Since the seizure of Crimea, NATO and the U.S. have stepped up presence missions in the Black Sea and in NATO Baltic states while Russia has also mounted its own uptick in worldwide military operations — particularly air and submarine patrols.

Politically, the West has mounted sanctions against the Russia —notably cancelling the sale of two French amphibious warships to the Russian Navy.

Despite more than a year of sanctions and presence missions, the Kremlin has neither softened in its support for Eastern Ukrainian separatists nor reduced its military footprint.

In addition to calls for NATO to revamp its approach to Russia, he also said arming Ukrainian forces with heavier anti-tank weapons — like the FGM-148 Javelin and the BGM-71 TOW — would be a militarily sound decision.

“From a military perspective, I think it’s reasonable that we provide that support to the Ukrainians and frankly without that kind of support they are not going to be able to protect themselves from Russian aggression,” he said in response to a question from Sen. John McCain (R-Ariz.) on arming Ukrainian forces.

Despite Russia’s ranking on his threat list, Dunford said it was still important to maintain ties with the Russian military. Prior to the Ukraine conflict, the Russian military was included in NATO meetings and had more exchanges with Western militaries.

“Even as the relationship is challenged right now, it’s important that we maintain a military-to-military links with our Russian counterparts to mitigate the risk of miscalculation and turn the trend in the other direction in terms of trust,” Dunford said.

Beyond Russia, Dunford singled out China, North Korea and the Islamic State in Iraq and Syria (ISIS) as top national security concerns.

“If I had to rack and stack them today, I’d have Russian down as number one. I’d have China down as number two.” he said.
“It doesn’t mean that we view China as an enemy but as someone in uniform, I get paid to look at someone’s intent and their capability. When I look at Chinese capability relative to our interests in the Pacific, I would have to consider China as an area of concern for security — distinct from a threat.”

During the mostly genial hearing, Dunford stressed the importance of the ongoing Department of Defense planned pivot or rebalance to the Pacific .

“We have an unprecedented level of exercises and engagement in the Pacific to assert our influence and provide a stabilizing presence,” he said.
The rebalance, “provides a security infrastructure that we can use to advance our national interests. That’s what has existed for the past 70 years and the rebalance … is designed to modernize that security infrastructure and make sure it’s in place so just as we protect our national interest over the past 70 years, we can do that in the future as well. “

China — especially in the South China Sea — has accused the U.S. of manipulating smaller countries in the region as well as creating an “Iron Triangle” between the U.S., Australia and Japan to suppress Chinese expansion.

On the acquisition front, Dunford supported the ongoing stance of the U.S. Navy in funding the estimated $100 billion Ohio-class nuclear ballistic missile submarine outside of the Navy’s shipbuilding account.

Popular within the Pentagon, Congress and the administration, Dunford will likely be easily confirmed to replace Army Gen. Martin Dempsey as chairman of the Joint Chiefs later this year.