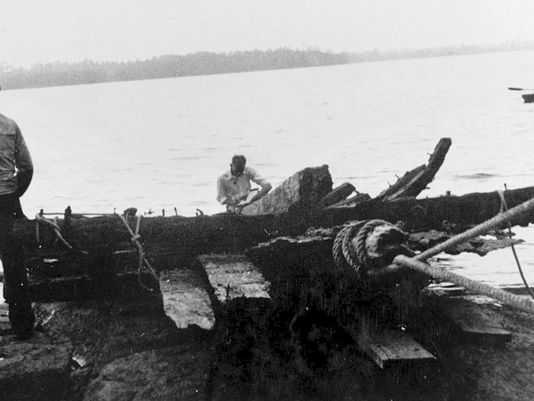 The Royal Savage was raised from Lake Champlain in 1934. AP photo via Burlington Free Press.

The Navy accepted the remains of a Revolutionary War ship from the city of Harrisburg, Pa., on July 1, noting the importance of displaying naval history for the public.

The city bought the Continental Navy schooner Royal Savage remains in 1995 but has kept them in storage since, according to a Navy news release.

“This ship, and its artifacts are now going to be preserved and cherished for the public for generations to come as they should be,” Mayor Eric Papenfuse said in the news release.
“For the last 20 years, the artifacts have stayed in storage, out of public viewing, and we are pleased today to bring them to the light of day and to make sure they are being given the proper care.”

The storage situation of the famed Royal Savage in a Capital Region Water warehouse in Harrisburg, Pa., whose mayor acknowledged the city did not have the means to properly preserve the ship remains. Photo courtesy PennLive.com.

Naval History and Heritage Command director Sam Cox accepted the artifacts on behalf of the Navy, saying “the United States Navy takes very seriously our obligation to protect and preserve the heritage of the Navy and our nation.”

“The first thing we will do is go through a process of preserving and protecting them for the long term,” he said.
“As we go through that process, we will open the process up to scholars. Archeologists and historians have much to learn from this.”

Royal Savage was a British two-masted schooner that American forces sunk during the siege of St. Johns, Quebec, in 1775. Americans raised and repaired the ship soon afterwards, and it became the flagship of the Lake Champlain squadron that denied British access to the lake and contributed to the defeat of the British in Saratoga.

The schooner ran aground in a battle in 1776, and the British captured and burned the ship in the lake. The burnt hull of Royal Savage remained in Lake Champlain until 1934, when marine salvager and amateur archaeologist Lorenzo Hagglund raised them. His family possessed the remains until Harrisburg bought them in 1995.