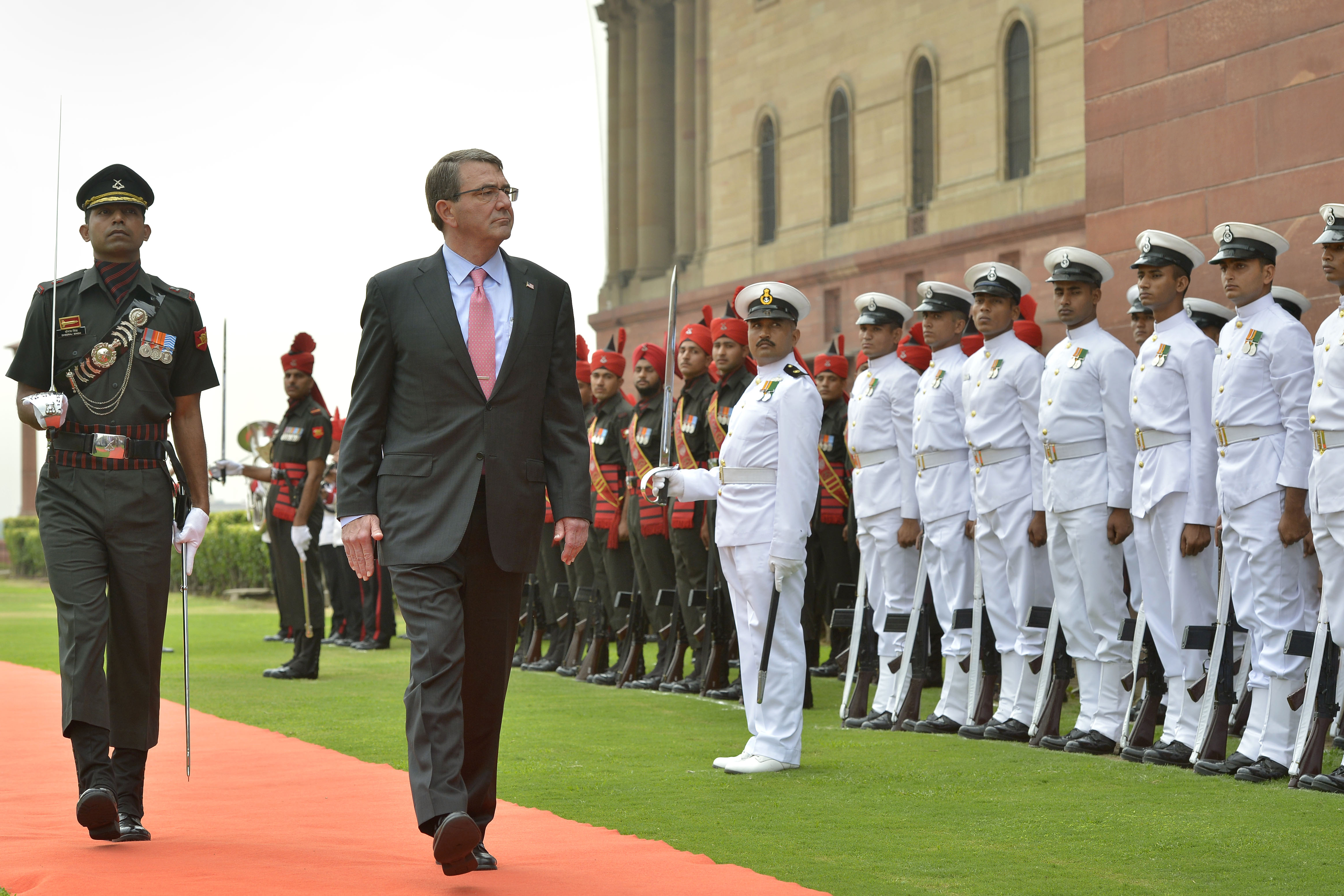 Secretary of Defense Ash Carter is welcomed with an honor cordon to India’s Ministry of Defense in New Delhi, india on June 3, 2015. DoD Photo

Smaller nations are the ones mostly questioning the seriousness of the United States in re-balancing its commitment to the Indo-Pacific region when it is distracted by continuing crises in the Middle East and Ukraine, one of India’s leading foreign policy experts said Tuesday.

Hermant K. Singh, speaking at the Center for International and Strategic Studies, a Washington, D.C., think-tank, said that for decades the United States “has been a re-assuring presence” in the Indo-Pacific, but because it is a global power, America has commitments to meet in other regions as well.

“We have to do things ourselves,” he said speaking of India’s rise as a regional power. “Regional powers will be doing a lot of thinking and heavy lifting.”

“India is back in play” with a growing strategic relationship with the United States and other democracies, such as Japan and Australia. The new forcefulness also is shown in the government of Prime Minister Narendra Modi’s idea of pursuing an “India first” pragmatic foreign policy. Singh called it “a new approach of engaging the world.” The strategy accompanying the policy also puts new emphasis on maritime security and freedom of navigation.

The security relationship with the United States is “moving closer” and is of the most importance to India.

Like the United States, Singh said India wants a “balanced, rule-based Asian security order.” He said both believe in a “multi-polar Asia where everybody rises.” He cited the recent defense framework between the two as an example of the growing relationship.

Where India and the United States do not see eye-to-eye is on some trade issues such as the impact of the Trans Pacific Partnership [India is not included] and intellectual property rights, including patents on medicines. “Luckily, we’ve re-started the dialogues” on these economic questions, he said.

“Fault lines have deepened” with China as disputes over borders continue. He termed the situation an “uneasy peace.” He said Modi’s recent visit to China was designed to establish strategic communications between the two nations, build more stable ties between them, and work on economic opportunities that benefit both.

But China needs to “realize India is also a major Asian power,” he said. “Will China accept a new type of rising power in Asia” other than itself?

In answer to a question, Singh said the growing Russian-Sino relationship “really bothers the two major democratic powers in Asia [India and Japan]” because “it really means China has a free hand” in the region.

“We’re open to a new relationship with Pakistan when they want it,” Singh said. Among the conditions to end decades of on-again, off-again war over Kashmir between the two nuclear powers would be “no support for extremist elements” in Pakistan that carry out attacks such as the one in Mumbai in 2008 that killed 164 people and wounded more than 360 others.

On Afghanistan, “we don’t have a shared road map” with Pakistan about the future there, he said.

About other nations on its borders—Bangladesh, Bhutan, Nepal, Myanmar, and Sri Lanka, they are finally working together on economic opportunity projects and energy. “India has a very special focus on the neighbors.” Later, he added, “We hope Pakistan will join too.”

Singh said it was important to remember that the “bulk of global economic growth over the next 30 years will come from India and other eastern countries,” making the region one of rising interest and importance.