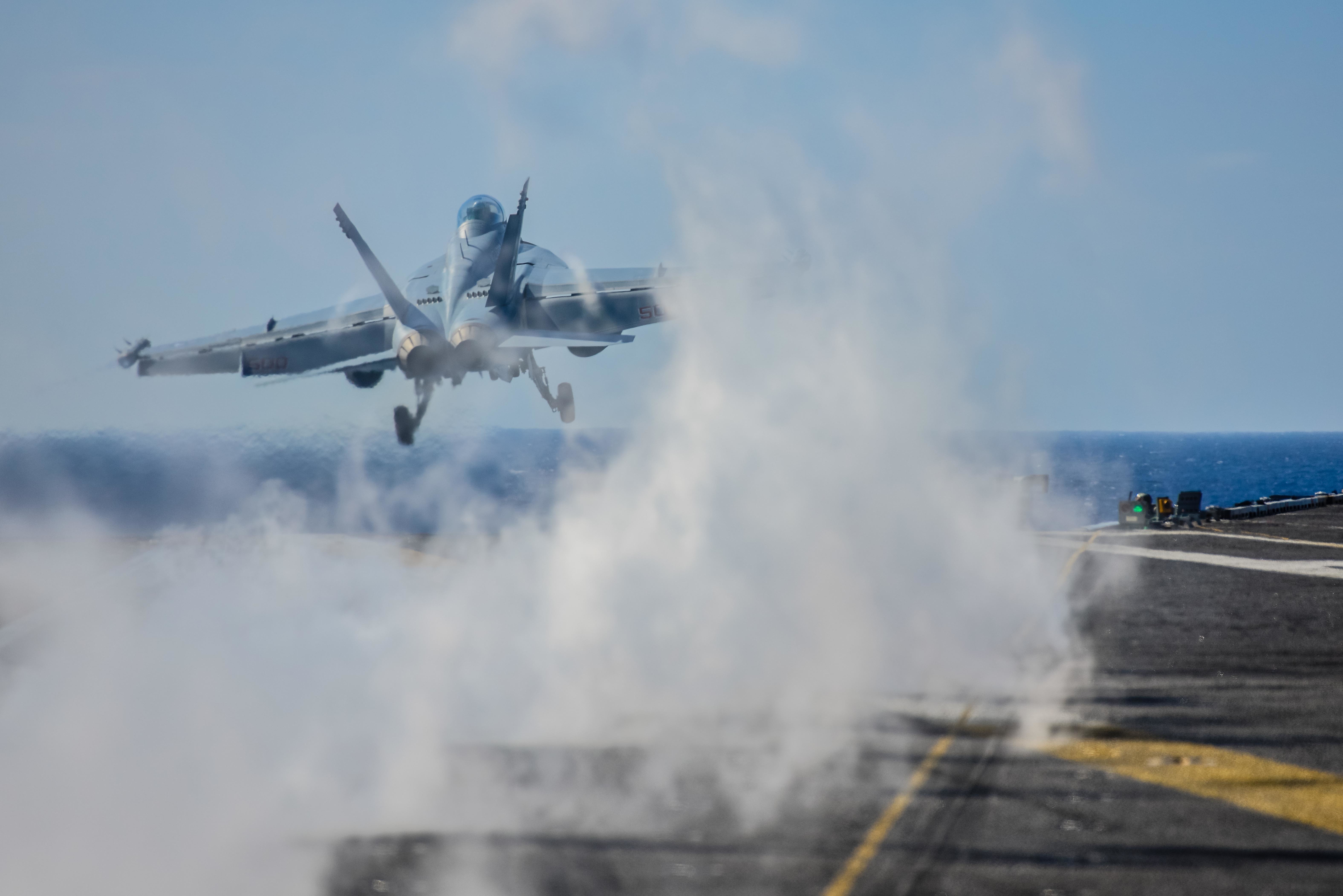 An E/A-18G Growler attached to the Wizards of Electronic Attack Squadron (VAQ) 133 launches from the flight deck of the aircraft carrier USS John C. Stennis (CVN 74) on April 20, 2015. US Navy photo.

The new class of Gerald R. Ford (CVN-78) aircraft carriers, with its software-driven Advanced Arresting Gear (AAG) and Electromagnetic Aircraft Launch System (EMALS), will put so much less stress on aircraft that Navy engineers will be able to think about future aircraft design in a whole new way, the Navy’s director of air warfare told reporters Monday.

Rear Adm. Michael Manazir said the current Mk 7 arresting gear and Mk 13 steam catapults on the Nimitz-class (CVN-68) aircraft carriers function via pure mechanics – hydrolics, cables, pulleys and more can very crudely adapt to the weight of the aircraft, but the planes have to be designed to withstand severe physical forces during launch and recovery – and that durability tends to equate to added weight.

The new EMALS system, on the other hand, uses electromagnetic fields to create a smoother acceleration – and without subjecting the flight deck to steam. The AAG software senses the weight of the aircraft that’s landing and can fine-tune the arresting gear’s reaction to put less stress on the planes, Program Executive Officer for Aircraft Carrier Rear Adm. Tom Moore said in the same media roundtable.

While many people are excited about the benefits this will have for heavier aircraft – F/A-18 Super Hornets and F-35C Lightning II Joint Strike Fighters, for example — “what it also does is open up … the envelop for lower-weight aircraft. So as we start exploring where we’re heading with unmanned aircraft, it gives us a lot of flexibility from a warfighting standpoint that the Mk 7 Mod 4 doesn’t,” Moore said.

Manazir said this is an important factor for him as he considers early ideas of what the future carrier airwing might look like.

“Typically in our manned aircraft designs, you have to build an airplane that fits within the operating envelops of the Mk 7 arresting gear and the Mk 13 catapults. So you kind of start with an operating envelop that gets you sort of a design of aircraft like we have now – F-18 Super Hornet, Growler, Joint Strike Fighter,” he said.
“The aircraft are structured that way, they’re strengthened … you build weight and structure into the airplanes to accommodate the violence of the arrested landing. With the Advanced Arresting Gear and the ability to land an airplane – it’s still a controlled crash, but relatively more softly, and to launch it relatively more softly, and so a graduated kind of force as the airplane goes up – you can now start to do things with aircraft design that you couldn’t do before. It might allow us some more margin in weight, in size, and in structure and capability.”

Manazir said industry often wants to marinize existing designs for aircraft, weapons and more so they can operate at sea. But he said adapting aircraft designs for carrier use goes beyond typical marine concerns, and reinforcing the frame to survive catapult launches and trap landings can add so much weight that the payload capacity shrinks, or can rule out design concepts altogether.

“Some of the concepts that are out there with structure and with outer mold line and size, the advanced technology of our AAG and EMALS is going to allow us to kind of open the envelope,” he said.

Ultimately, this new freedom of design may make the most difference with unmanned vehicles that may not take on the same shape and weight as manned aircraft. Manazir said the Navy’s carrier airwing of 2025 will include Super Hornets, Growlers, F-35s and the Unmanned Carrier-Launched Airborne Surveillance and Strike (UCLASS) aircraft. But in 2040, the flight deck will look drastically different.

“As I look to about 2040, when I think about what we generically call strike fighters – which are the F-18 E and F and the F-35C off the carrier, covered by the EA-18G Growler – when I think about strike fighters operating in a heavy electromagnetic spectrum and I look forward to those airframes, what I see in 2040 is F-35C as the legacy airplane, a UCLASS airframe which is probably up to Increment 2 or 3 by then, and then a FA-XX, which could be manned, unmanned or optionally manned.”

He said the Navy started initial analytical work on FA-XX in conjunction with the Air Force’s early work on their F-X future fighter. But he believes FA-XX will be a family of systems with at least some unmanned capability, and the relative freedom AAG and EMALS bring to engineers may allow for more innovation than would be possible with the legacy launch and recovery systems.