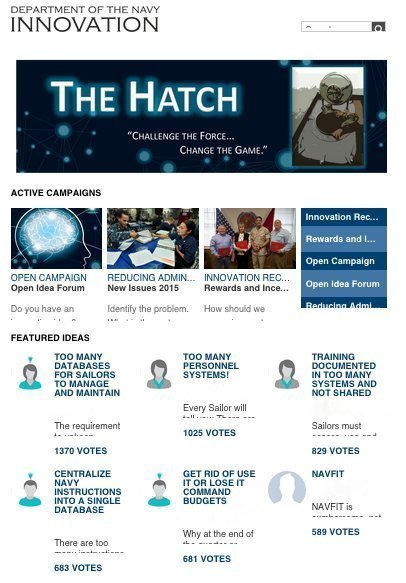 A screenshot of the Hatch homepage, courtesy of US Navy.

Rear Adm. Linda Wackerman, who oversees the RAD effort, told USNI News on Thursday that more than 2,000 ideas – about 1,400 in the first round and about 800 from the second round – tend to fall into just a couple of topic areas, showing that certain issues are at the forefront of sailors’ and civilians’ minds across the Department of the Navy.

Chief among those topics is the issue of mobility. Sailors – who may possess several phones, tablets and laptops between their personal and work equipment – are still sometimes forced to log into a desktop that is physically wired into an Internet connection to get their work done.

Wackerman, the reserve deputy director of the assessment division (OPNAV N81), said the Navy assembled a Mobility Integrated Product Team (IPT) to look into providing greater connectivity for sailors, who may rely on an internet connection for Navy-related training, for online classes during deployments and other important work.

“Ships only have so many seats where you can sit at a computer and get work done,” she said.

The IPT already conducted a test last year on the USS Laboon (DDG-58) in which 10 points on the ship were set up with Wi-Fi access for laptops. Wackerman said the group is looking for another ship to serve as a test bed for even greater Wi-Fi and other connectivity opportunities for the sailors and their many devices.

The Navy Reserve is leading the way in addressing the mobility issue, she said, noting that reservists are able to get certificates on their personal phones and tablets through the Defense Information Systems Agency so they can access Navy webpages that are normally unavailable on mobile devices.

“We really need to get into this age where technology is working for us, and optimized, working for us effectively and efficiently,” Wackerman said, adding that mobility was one of the primary topics of the sailors’ RAD suggestions.

General military training was another hot topic in the first two RAD rounds. Wackerman said her team looked at the training actually being imposed on the sailors, and it exceeds what is actually required by the Navy secretary.

“Some of it you get a lot out of and it’s very worthwhile, but you know, we have to step back as leaders and say, do we keep getting the same information put to us every single year that we already know? Maybe update us when something changes,” she said.
“And understanding that there’s new people always coming in the door, you’ve always got to got them up to speed. So common-sensing the whole process, and then figuring out what is really important to get trained to people, and when.”

Process improvement, particularly related to inspections, was another area of interest, she said.

“There can be redundancies – you can be asked to do different parts of an inspection that fall under different stakeholders, so trying to get that all together so you only do it once as opposed to different times” is something the group has been looking into.

Going forward, the RAD effort will tighten its relationship with the new Naval Innovation effort, Wackerman said. Rather than having a third RAD round with its former IdeaScale website, RAD will live on as a campaign on Hatch, called New Issues 2015. Other campaigns include the Open Idea Forum; Innovation Recognition Challenge, which looks at how to best incentivize innovation and reward good ideas; the Naval Innovation Network; and Navy Reserve Policy Issues Challenge, which looks at policies and procedures unique to reservists.