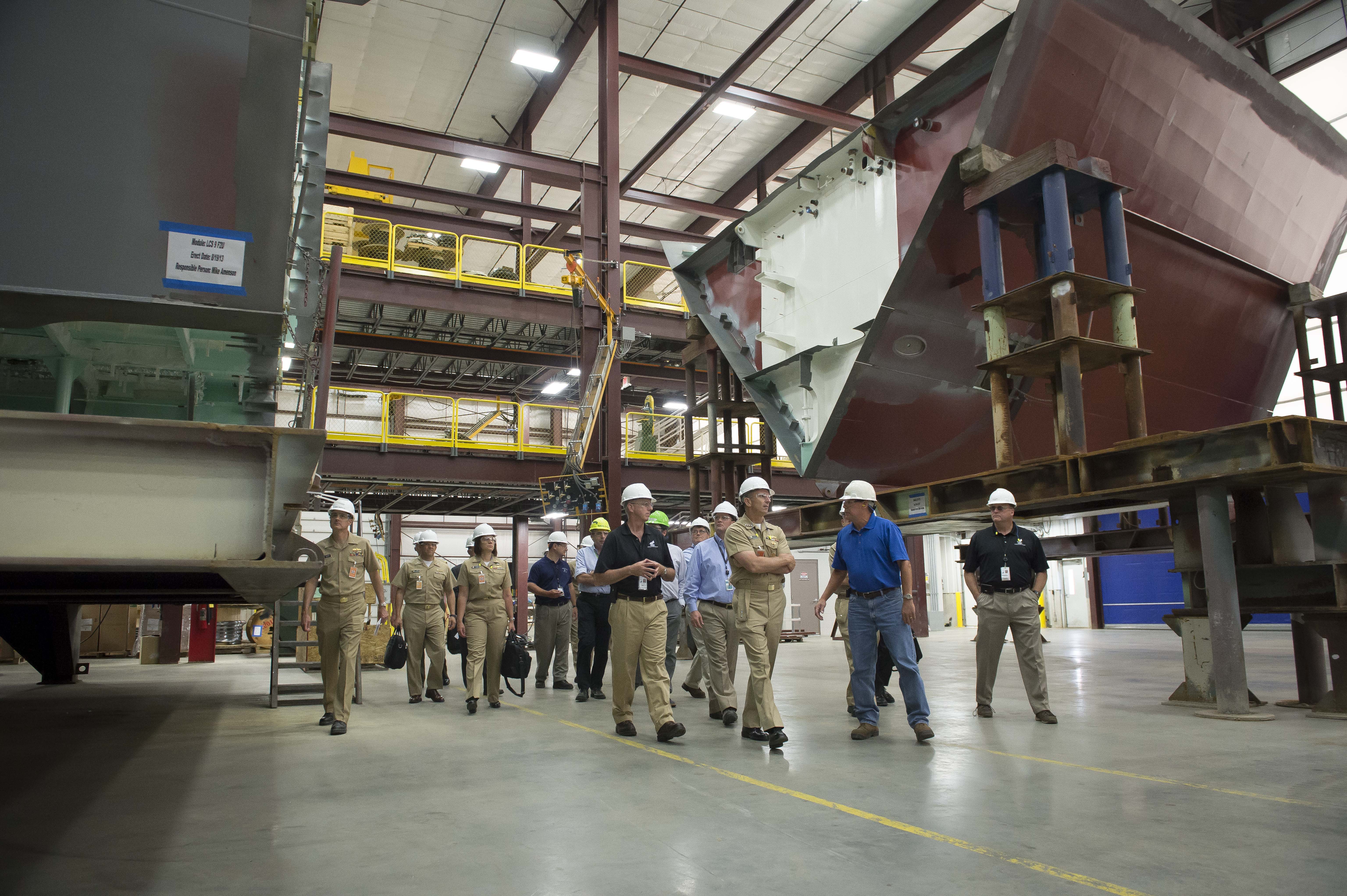 The Navy is working with shipbuilders Austal USA and Lockheed Martin to take weight out of its current Littoral Combat Ships and future frigate design to allow for the addition of more armor and weapons, the Navy has told USNI News.

Frigate program manager Capt. Dan Brintzinghoffer said in April that to create the “frigate,” the Navy would start with the LCS design and add Mk 38 25mm machine guns, the Multi-Function Towed Array detection system, a torpedo decoy, the Raytheon SeaRAM anti-ship missile defense system and additional armor – meaning that weight and other margins would have to come off the ship somewhere else.

The Navy will tackle the LCS-to-frigate transition in several ways, Program Executive Officer for LCS Rear Adm. Brian Antonio has told USNI News. The ships contracted after Fiscal Year 2019 will be designed and built as multi-mission frigates instead of LCSs with plug-and-play mission modules. The LCSs already delivered will undergo modifications during future maintenance availabilities to have frigate-like features added in. And the LCSs that will be built between now and FY 2019 will be delivered with as many frigate features as makes sense, based on cost and schedule.

To accomplish that, PEO LCS is working on forward-fit and backfit capabilites simultaneously.

On the future frigates, the Navy is leading a pre-preliminary design effort with participation from Austal USA and Lockheed Martin, Navy spokesman Chris Johnson told USNI News Tuesday. The Navy will determine the initial topside layout and performance characteristics of the platform, and the two contractors are being paid to scour through the ship design for weight reduction and stability improvement opportunities for Navy consideration.

These concurrent efforts will be joined together to support preliminary design this fall, Johnson said.

Some ideas are easier to identify and implement than others. For example, Lockheed Martin’s Freedom variant (LCS-1) ships, with only a small level of engineering effort, could save weight by splitting the aft buoyancy tanks, using a lighter fire insulation in the deck house and removing the ride control active fin stabilizers, Johnson said.

On Austal’s Independence variant (LCS-2), Johnson said the Navy could change the flight deck tie downs to a lightweight ALCOA tie down and switch from the current Mobicon container handler to a new straddle lift carrier.

With a little more engineering effort, Johnson said both variants could upgrade to lightweight composite gas turbine enclosures. They could also eliminate any systems and design elements needed specifically for the mine countermeasures mission package, which is part of LCS but will not be in the frigate mission set. And they could also seek ship frame design changes that are not applicable to the backfit effort but that would make future frigates lighter right out of the shipyard.

Any LCSs to incorporate Navy-approved changes into their design would do so through engineering change proposals. Depending on the timing, the ships would either have the modifications made during construction or during the Post Shakedown Availability. The LCS Seaframe program office would determine which modifications to make to each LCS based on the cost and impact to production schedule.

To backfit the already-built LCSs, Johnson said the LCS Fleet Introduction and Sustainment program office is coordinating with the two contractors to assess potential frigate modifications “against the available budget, ship operational schedules and ship maintenance and modernization availabilities.” The Navy would use the Ship Change Document process to pursue any modifications that make sense financially and operationally.

Johnson said the pre-preliminary design and system selection for the frigate would wrap up in October, and the Navy would then move into preliminary and contract design work.