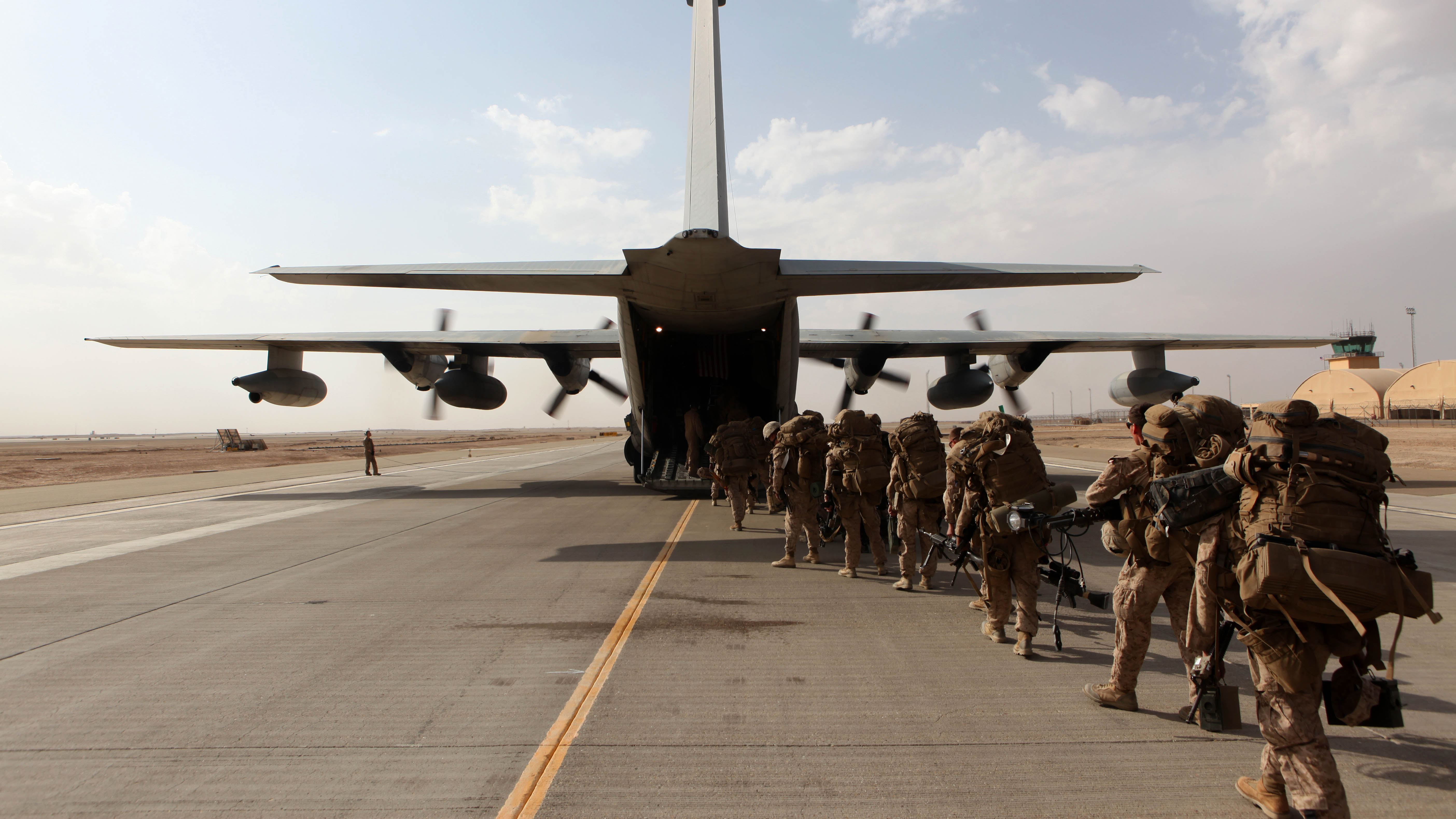 Marines and sailors with Marine Expeditionary Brigade – Afghanistan load onto a KC-130 aircraft on the Camp Bastion flightline on Oct. 27, 2014. US Marine Corps Photo

Republican and Democratic members of the Senate Armed Services Committee on Thursday stressed to the senior American officer in Afghanistan that the administration must understand “wars do not end just because politicians say so” and that he needs to have the option to adjust the withdrawal timetable of coalition forces to retain the progress made over the past 13 years against al Qaeda and the Taliban.

Committee Chair Sen. John McCain (R-Ariz.) and others attacked “the calendar-based approach” to withdrawal that would see about 5,500 coalition forces remaining in Afghanistan during the height of the summer “fighting season.” Combat traditionally ends in late September as the snows begin falling in the mountains. There are now about 12,900 coalition forces in training and assistance missions across the country in places such as Kandahar, Jalalabad, Herat and Kabul.

Army Gen. John Campbell said, “I have provided options to my chain of command” and noted that Afghan President Ashral Ghani has also asked for “some flexibility” in the schedule that would bring the American force down to about 1,000 by the end of 2016. That force would be concentrated at the U.S. Embassy in Kabul and an assistance mission at nearby Bagram.

“We see a new spirit of cooperation in Kabul,” Campbell said of the agreement between Ghani and his rival in the presidential election, Abdullah Abdullah. Abdullah serves as the country’s chief executive officer. He also noted that the 352,000 Afghans in the army and national police did not take sectarian or tribal sides during the months of stalemate over the creation of the new government and have actively pursued the Taliban since the coalition direct military mission ended.

When asked about his definition of success in Afghanistan, Campbell said one measure is “the cooperation I see between police and the Army is quite good.” Right now, he said the Afghans control all district centers. He added that if one center was captured that it would retaken in “six or seven hours.”

Campbell singled out the performance of Afghan special forces and its aviation unit in taking the fight to the Taliban.

He also mentioned the increased cooperation between Pakistan and Afghanistan since the Taliban attack on an army school in Peshwar in December in combating terrorism on both sides of the border.

At the same time, he said that Ghani and Abdullah are attacking the longstanding problem of corruption in the government, a concern of the security forces.

They also are opening opportunities for younger officials to advance. As an example, Campbell said Ghani had retired 48 generals the day before the hearing and had retired 15 others when he took office. “Leadership makes a difference;” and for lieutenant colonels and colonels, “there is hope to move up.” He also noted that the Afghan army is now recruiting year-round and not just in the winter, when its soldiers are not engaged in combat.

“I don’t see that happening,” Campbell said when asked if Afghan security forces would collapse as Iraq’s did when the Islamic State moved across the border from Syria and took Fallujah, Ramadi, and Mosul in quick succession.

Campbell said that logistics remain an issue for the security forces. While depots in and around the capital are filled with equipment and spare parts, getting that matériel to outlying bases and stations remains challenging. Afghan “culture is to hoard.” He said he stresses to Afghans “you’ve got to move this stuff” to where it is needed.

Helping with logistics and maintenance now are 34,000 contractors – 24,000 from the United States and coalition countries and 10,000 Afghans. Campbell said the future role of contractors in Afghanistan needed to be part of a holistic review of future needs.

“The Afghan people and government do not want to see” the American and coalition forces leave, Campbell said. He cited a recent survey released in January and conducted in November saying 77 percent want those forces to remain. He added that Ghani and Abdullah also repeatedly thank American forces for their sacrifice over the years. “You didn’t hear that before” from former President Hamid Karzai, said Campbell.

“We’ve got to maintain this progress,” Sen. Tim Kaine, (D-Va.) said. “We are the partners of choice,” not only in Afghanistan but increasingly with India and Mexico. In any drawdown, “we’ve got to make it conditions-based” and not let the battle against the Islamic State “take our eye off the ball in Afghanistan.”

Campbell said that while monitoring the Islamic State in Afghanistan he did not see it working closely with the Taliban. At one point, he put his fists together to show how their goals differed.

He said the coalition’s legacy in Afghanistan will be “systems and processes” it leaves behind to allow the Afghans to consolidate gains that have been made since 2001 in health care, education, economy, and security.

“I feel very good about where we are” in discussion options with Central Command and the administration, Campbell said. Several times during the questioning, he noted that he had been granted the flexibility he requested in the fall review of the situation in Afghanistan.