Pacing the sidelines at the weekend’s Army-Navy game will be the U.S. Naval Academy’s famous goat mascot, Bill XXXIII. At first blush, a goat seems to be an unusual mascot for the Navy as opposed to something fiercer and maritime — like a shark or barracuda — but goats have a long history with sailors that led to their revered position at USNA.

Like other popular pets such as cats and dogs that have been welcomed on ships since the earliest days of sailing, goats also served a practical role on the waves. Since ships spent months at sea, the crews needed a source for fresh dairy products, meat, leather and fiber. Goats offered advantages over cows. They required less space and goat’s was sure-footedness was better suited for rough seas. A half-ton cow being tossed in a storm could be as dangerous as a loose cannon.

Goats also spared ships from having to store the enormous amount of special feed that would have been needed for cows because goats would at least try to eat anything placed in front of them. Crews would feed goats scraps of whatever was available, giving goats another purpose by turning them into the ship’s garbage disposal.

Furthermore, goats have a trait that helps their survivability in situations where they might be in water — they swim.

For centuries, fresh goat meat was prized by ship crews not only as a tasty alternative to their regular diet of salted pork, they also believed it could cure disease and heal wounds. It was fairly common practice for sailors to release goats on islands and remote shores where the animals would quickly proliferate and become a food reserve (and an environmental disaster in the decades to follow). 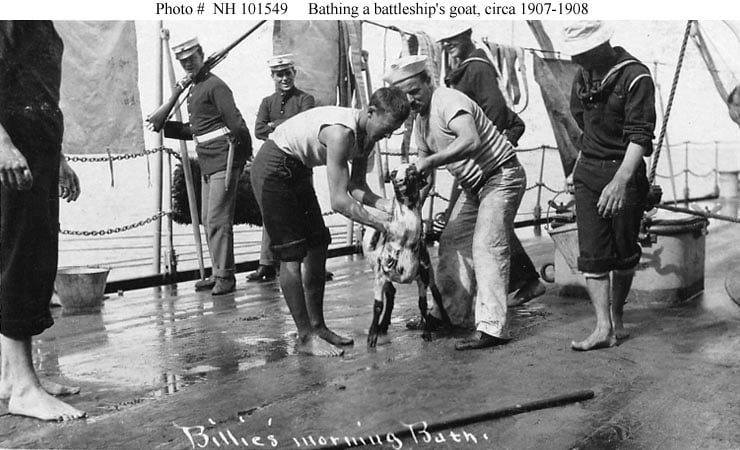 Bathing a battleship’s goat circa in the early 1900s

As methods for keeping ships supplied improved in the 19th century, the affability of goats began to make them more popular as pets than food in the U.S. Navy. They transitioned form being simply livestock into mascots. This carried over to the U.S. Naval Academy, where goats joined several of the academy’s other mascots including pigeons, pigs and even a gorilla.

The Goat is Old and Gnarly

There are several different (and conflicting) stories on why the goat was embraced as the official mascot of the USNA.

The plaque beneath the bronze goat statue that greets visitors at the entrance of the Naval Academy in Annapolis places the origin in 1890 when midshipmen “commandeered” a goat mascot they found as they marched towards West Point for the first meeting of the football teams. Navy won 24-0. 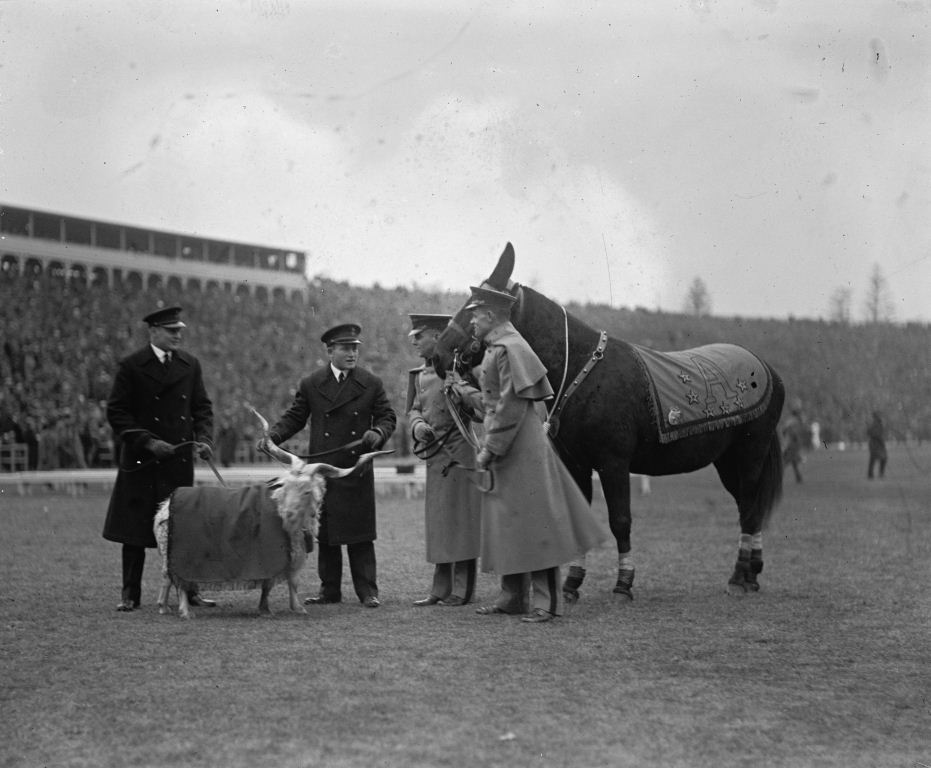 An odder story of the origin involves two ensigns who were taking the goatskin of their beloved ship mascot to the taxidermist when they stopped by the game being held in Baltimore. With Navy trailing at halftime, one of the ensigns wrapped himself in the goatskin and began to race around the stadium in an attempt to rally the midshipmen. Navy emerged victorious and the “goat” was praised for bringing the team good luck.

Commander Colby Chester, USNA’s Commandant of Midshipmen 1891-1894, is also often credited with starting the tradition. He was fond of goats and recruited one named “El Cid” from USS New York to serve as the mascot for the 1893 game. The presence of El Cid spurred Navy to a 6-3 victory.

When Navy and Army met again in 1900, another goat from USS New York watched the midshipmen triumph over the cadets. The goat became known as “Bill I” and an institution was firmly established.

There have been 36 goats to serves as the official mascot, 33 of which have been named Bill (sometimes with the full name of Bill Capricornus) and not all have fared well.

A few have been discharged following losses to Army for failing in their duty to ensure victory. One indifferent goat lost his job to be replaced with a goat that had a more “wicked eye and evil disposition.”

From the very beginning, the goat has been used as a less-than-subtle burn toward West Pointers.

It is possible that a contributing factor to the popularity of having goats at the games in the early years is that they served as a means for the midshipmen to mock their opponents. The cadet who was at the bottom of his class at West Point was known as “the goat.”

In 1912, midshipman managed to somehow procure the blanket used by the Army’s mule mascot. The blanket was placed on an old nag who was then led through the streets of Annapolis while pulling the goat in a cart.

At the 1971 game, the cadets stood at attention and saluted as a limo flying the presidential flag arrived with a security detail. Expecting Richard Nixon, the cadets were non-plussed when the door to the car opened and the goat jumped out.

The cadets have targeted the goat for revenge on a number of occasions. Although the goat’s embroidered blanket was a valued trophy sought by the captain of the Army team, the cadets received their greatest satisfaction by kidnapping “Bill” himself. After one successful raid they even published an ad in the New York Times that read “Hey Navy, do you know where your kid is today? The Corps does,” accompanied by a photo of their hostage.

Kidnapping attempts became so common that the midshipmen would keep the goat in secret locales and even had him transported to a game in a Brink’s armored car.

In retaliation for the frequent theft of their mascot, midshipmen have launched special operations that captured the Army’s mules. 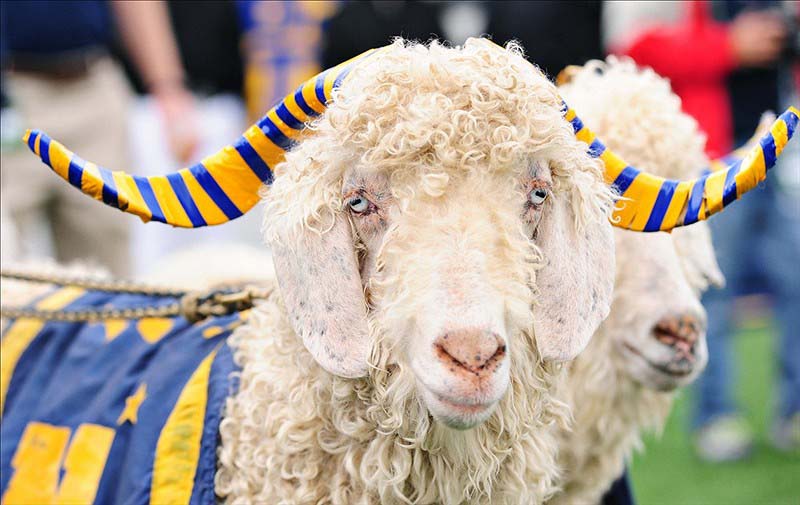 Bill the Goat in 2011. US Presswire Photo

A truce was declared in 1991, but the goat has since been kidnapped by perpetrators who have remained anonymous. Cadets steadfastly claim to know nothing of these violations of the agreement.

Bill XXXIII is safe for now. But if he’s unable to attend, Bill XXXIV is already prepared to relieve him.