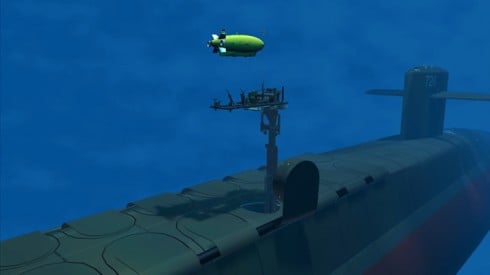 An artist’s conception of a large unmanned underwater vehicle (UUV).

“I don’t think we’re a couple of decades away from an unmanned aerial vehicle strike fighter,” Adm. Jon Greenert told an audience at the Naval Submarine League Symposium on Oct. 23.

Greenert had initially said “never” but quickly corrected himself. The reason Greenert is pessimistic is because of the complexities of autonomously employing weapons from such a war machine.

However, Greenert emphasized that applies strictly to unmanned combat aircraft—not to submarines. “I think we have to go there,” Greenert said. “We can’t build enough submarines.” That would be the case even if the Navy has “billions and billions” more dollars.

Even at a build rate of two Virginia-class submarines per year, the attack boat fleet is set to steadily decline over the coming decades as the Los Angeles-class begins to leave the fleet. There simple are not enough Virginias being built to replace those one-for-one.

Greenert said there are technologies in the “black” world that are a “little exquisite” that could be pulled into the general purpose Navy. Greenert said that by the end of the decade, the Navy ought to be deploying an autonomous large-diameter underwater-unmanned vehicle on missions.

“Maybe not in the most complex area of the world, but we’ve got to get it out there,” Greenert said.