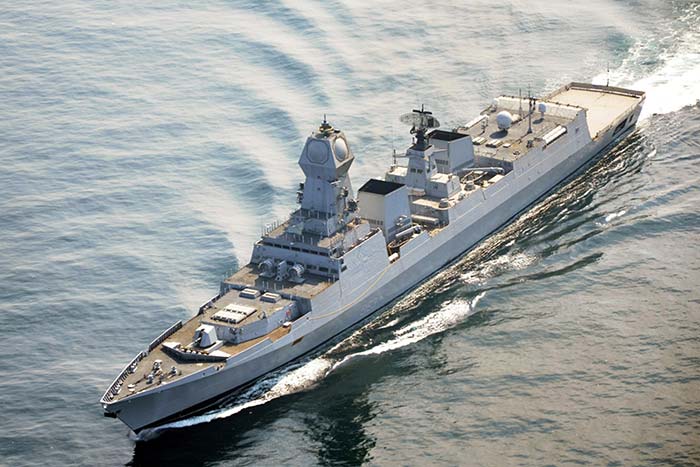 The ship — at 6,900-tons — is India’s largest domestically built and the first of a new class of surface warships.

The new ship is a “symbol of self-reliance,” India’s Prime Minister Narendra Modi said in a speech during the ceremony.

“Fighting a war and winning it has now become less difficult these days. But a modern military, armed with state of the arm weaponry alone is a guarantee against war,” he said.
“When we are capable, no one can dare challenge us.”

The destroyer is built around an Israeli Elta EL/M-2248 3-D air search radar and features a vertical launch system for its Barak surface to air missiles (SAM) and Brahmos PJ-10 anti-ship cruise missile.

“It’s the first class that was really built with modern technology. This class really brings the Indian destroyer community into the 21st century,” Eric Wertheim, author of Naval Institute’s Guide to Combat Fleets of the World told USNI News in July.

The Brahmos — built in conjunction with Russian industry— has a range of 157 nautical miles and speed of up to Mach 2.8, according to the 2013 edition of Jane’s Naval Weapons.

The missiles — which have greater range and speed than the U.S. Navy’s Harpoon anti-ship missile — were tested on the ship in June.