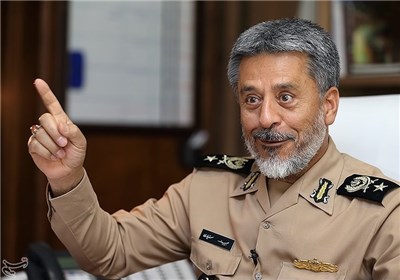 The 1,400 ton frigate is undergoing sea trials ahead of planned deployments in the Caspian Sea, Iranian Navy Rear Adm. Habibollah Sayyari said in an address to navy commanders at a base in Bandar Anzali on Tuesday.

The frigate, believed to be have been launched in 2013 with the name Velayet, has also been called Jaraman 2 and most recently Damavand.

“We have been using sea-based UAV technology in the navy and now have managed to equip Damavand destroyer which is undergoing final tests, with reconnaissance and combat UAVs,” Sayyari claimed to the government controlled Tasnim news agency.

Earlier this year, he said the frigate (which the Iranians call a destroyer) would also be armed with cruise missiles, but gave no specifics.

Sayyari also provided no specifics on the UAVs to be tested on the ship. Government statements on Iranian military capability have often proved to be exaggerated.

The new ship is based off of the 1960s era British designed Alvand-class frigates built for the pre-revolutionary Iranian government.

Lead ship Jamaran was launched in 2007 and has been in service in the Persian Gulf since 2010, according to Naval Institute’s Guide to Combat Fleets of the World.

The ships are designed to be multi-mission combatants with anti-submarine, anti-surface and anti-air capability.

“Imagery from the launch suggests the most significant difference between first-of-class Jamaran and Damavand is that the latter uses a new planar array air search radar,” according to a Thursday report in Jane’s Defence Weekly.

The ships are armed with the Iranian copies of the Chinese C-802 Noor anti-ship missile and a copy of the U.S. Standard Missile (SM) 1 called the Fajr.

Sayyari did not give an estimated date for the operational readiness of Damavand beyond, “the near future.”