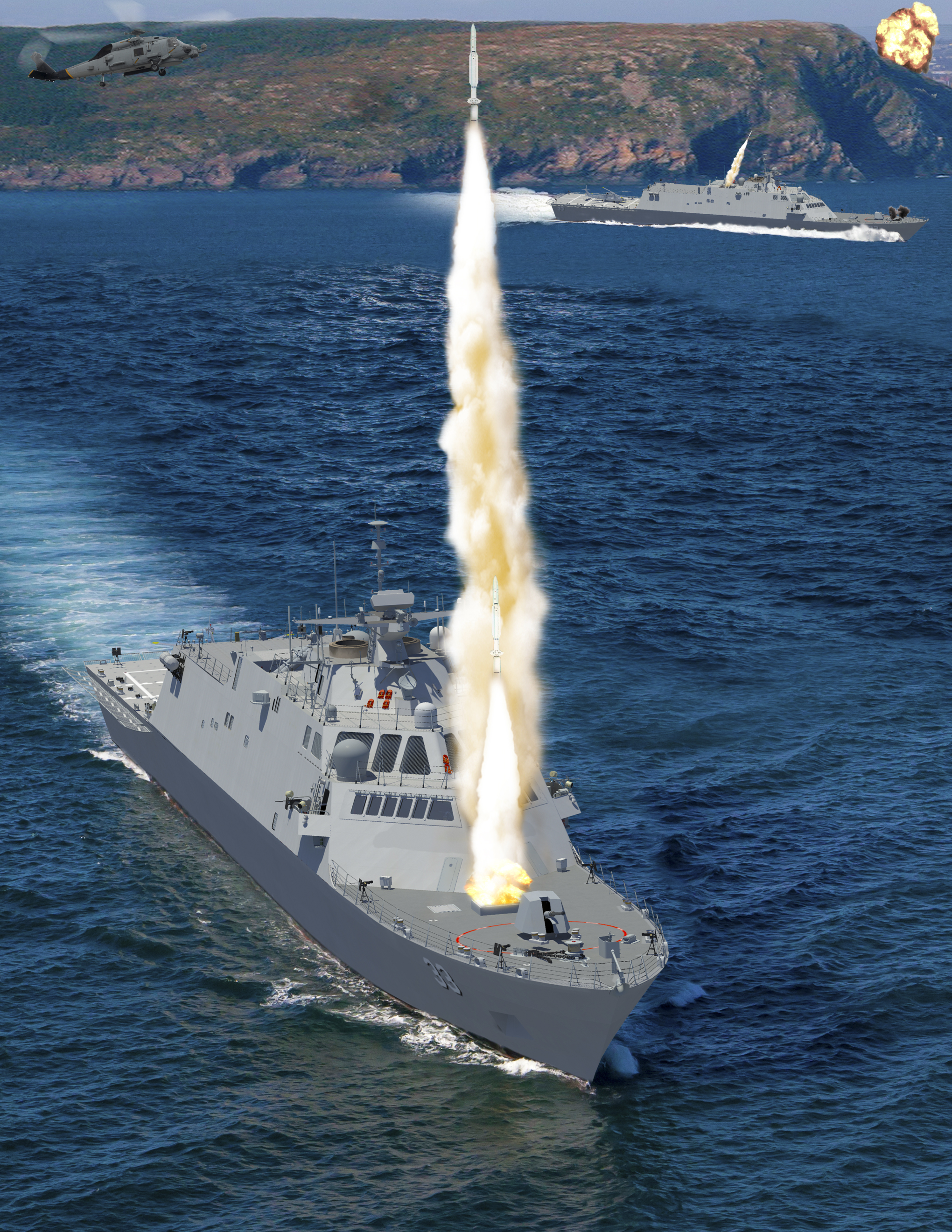 Lockheed Martin outlined the range of options they presented to the Navy as part of the Pentagon mandated study into a follow-on ship to the Flight 0 Littoral Combat Ships in a media briefing on Monday.

Lockheed — as part two April requests for information (RFI) from the Small Surface Combatant Task Force — submitted a variety of options based on their current Freedom-class (LCS-1) design.

Joe North, vice president of Littoral Ship Systems for Lockheed, emphasized the sea frame ability to accommodate increasingly sophisticated radars and weapons systems within the constraints of the basic design.

“We have a lot of flexibility in the hull. If you remember, we’re carrying around 180 metric tons of capability, empty space right now, for the mission packages, so depending on what they’re looking at we have a lot of capability in the hull from a naval architecture standpoint,” North told reporters on Monday.
“From a performance standpoint, we can add to the ship and make [systems] permanent or if you want to look at separate packages.”

Part of those options include a much more robust anti-air warfare (AAW) capability with permanent vertical launch system (VLS) cells capable of holding anti-air missiles and much more capable radar.

“[Increased] radar capability is everything from solid-state more capable rotators to a high end capability —the hull allows that,” North said.

As part of its international offering for ships based on the Freedom hull, Lockheed has offered a SPY-1F air defense radar — an 8 foot diameter version of the radar on U.S. destroyers sized for frigates.

An upgunned Freedom — at its current length of 118 meters — could also include 4 to 32 VLS cells. Each cell would be capable of fielding four Raytheon RIM-162D Evolved SeaSparrow Missiles (ESSM), North said.

“[VLS] is a modular package in itself because it gives [the ship] the capability to launch several types of missiles including ESSM, which is one of the things they’ll absolutely come back and look for to give the ship some more self protection… as a permanent installation,” he said.

Critics of the current Freedom and Austal USA’s Independence classes of ships have zeroed in on a perceived lack of offensive capability for the two ships.

Austal and Lockheed have developed preliminary designs of their ships with VLS for international sale.

“We need more ships with the protection and firepower to survive against a more advanced military adversary,” Fox said in February, just ahead of a Pentagon announcement forcing the Navy to take a second look at the LCS program.

As part of the coversheet for its response to the Navy’s RFI, Lockheed included a Freedom variant with a quad cell VLS firing what appear to be Raytheon Standard Missile (SM) 2.

In the surface-to-surface realm, North said the ship could accommodate either the current BAE Systems Mk 110 57 mm gun or a larger Mark 45 five-inch gun. The range of offerings did also factor in Naval Sea Systems Command decision to integrate the Longbow Hellfire AGM-114L for the fast attack craft/ fast inshore attack (FAC/FIAC) threat.

The Flight 0 Freedom and Independence LCS will be manned by 90 sailors for surface warfare (SuW), anti-submarine warfare (ASW) and mine countermeasure (MCM) missions by a series of mission packages that can be swapped out of the ship depending on the circumstances.

The Navy’s original plan was to build 52 LCS but cut the Flight 0 program at 32 — a reduction of 20 ships as part of the current reexamination of the LCS begun in February under mandate from Secretary of Defense Chuck Hagel.

The RFIs were part of the work of the Small Surface Combatant Task Force tasked to evaluate other options beyond Flight 0 LCS. The group was mandated to examine: A modified design of an existing LCS, existing ship designs and a new ship design.

“The RFI will ask for pretty specific information that will give us insight to the ship integration requirement, the performance, what are the primary, second and third order costs associated with [concepts],” John Burrow, executive director of the Marine Corps Systems Command and current head of the Small Surface Combatant Task Force told reporters in April.
“It’s a fairly detailed list of information that we’re looking for.”

The task force is due to submit their findings by the end of July.

Given tightening Pentagon budgets, an entirely new ship design is unlikely, however North speculated that several European yards have likely submitted information for the RFIs.

“I can imagine every shipyard across Europe — which is very stagnant and a lot of them have designs — [submitted a packet],” North said.
“I bet you woke up the entire planet.”