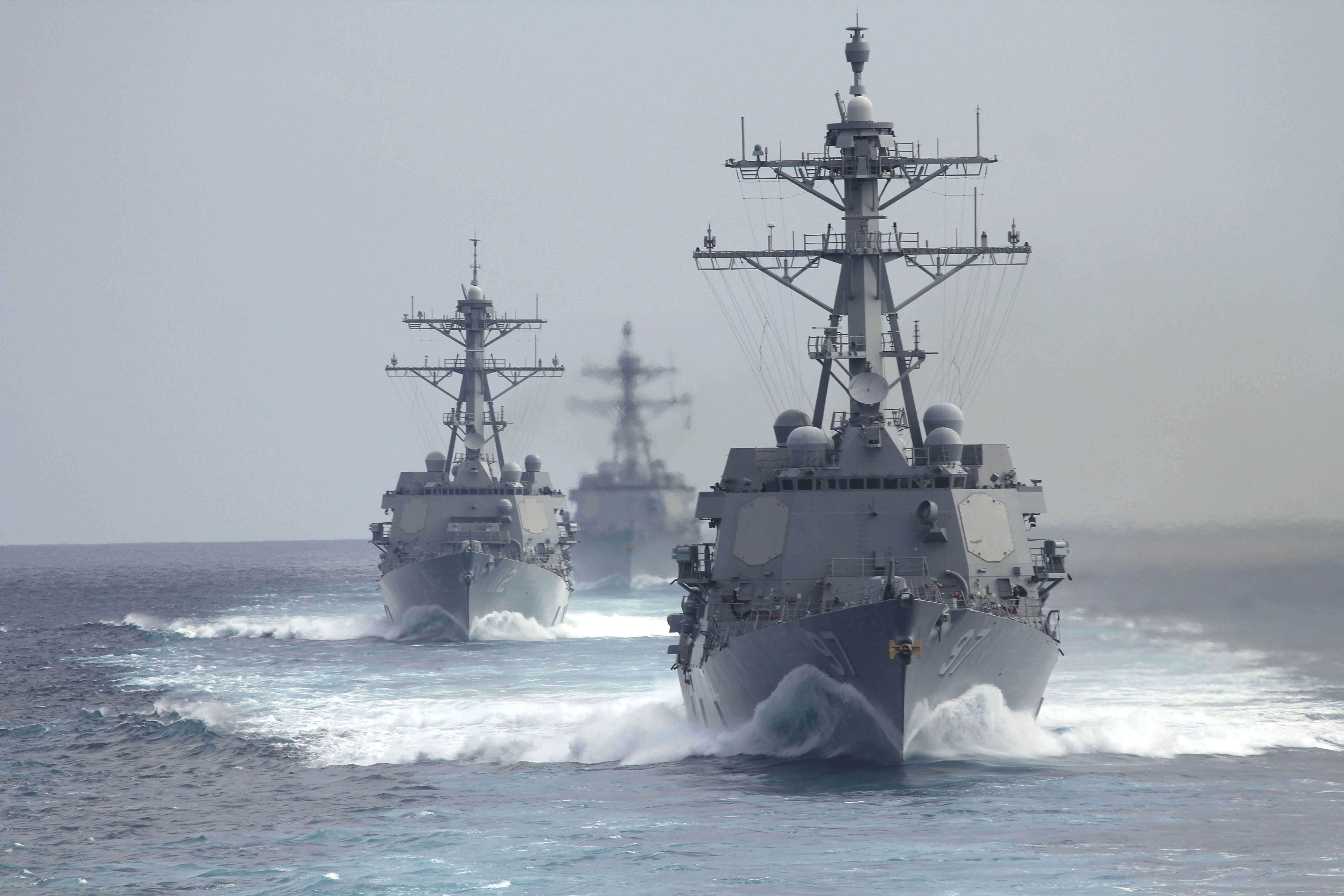 Originally, the service had planned for 62 ships (DDG-51 to 107) in the class to receive an upgrade that would have modernized each ship’s Aegis weapon system’s ability to track and defeat ballistic missiles and fight more traditional anti-air warfare (AAW) threats in a plan the Navy calls Integrated Air and Missile Defense (IAMD).

The upgrade to the so-called Aegis Baseline 9 standard for all of the ships was shelved in favor of a more cost effective midlife upgrade that targets certain ships for the full upgrade — and for others boost existing systems to a higher ballistic missile defense (BMD) capability. 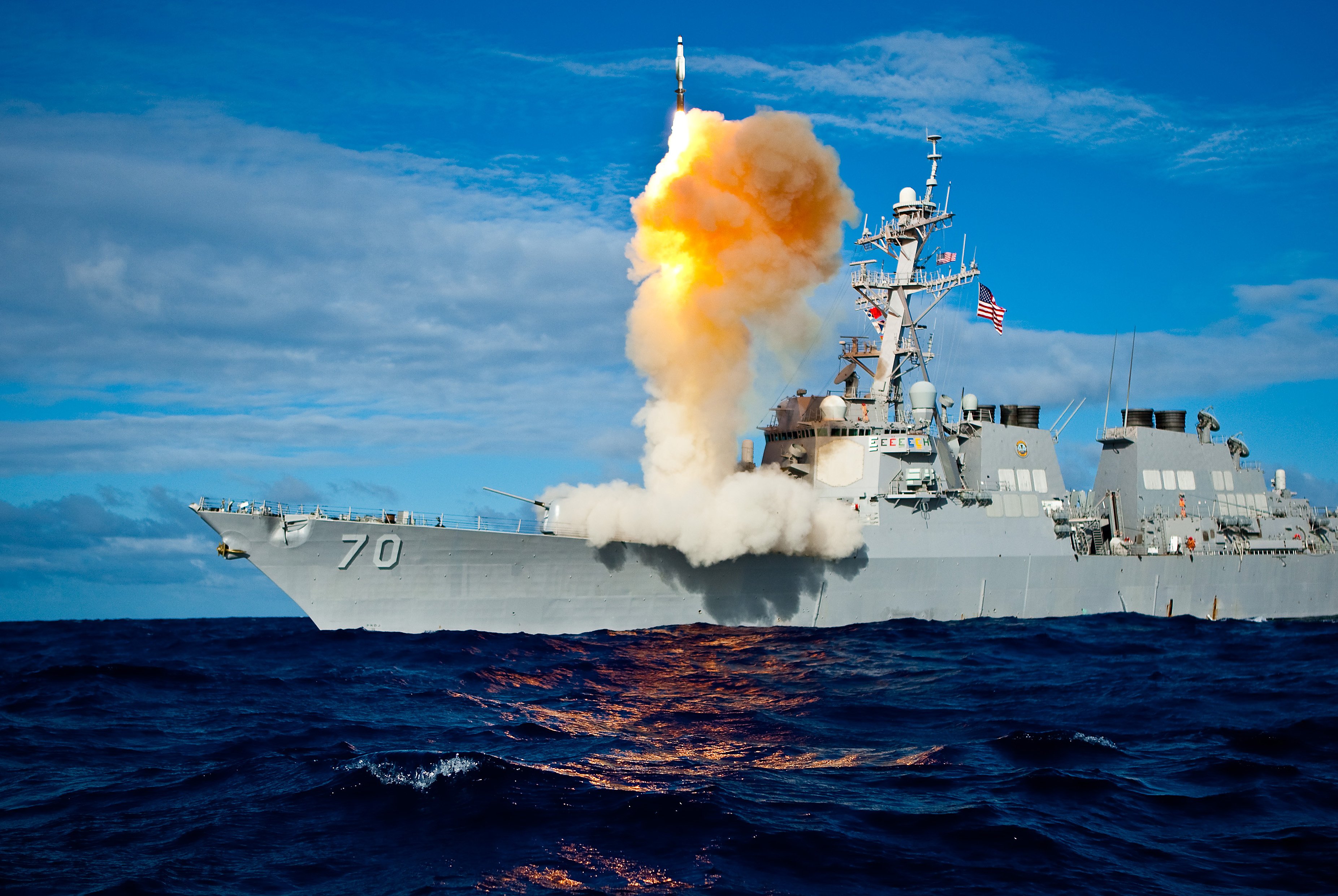 Started in 2007, the Aegis modernization program was designed to upgrade all of the Navy’s Burkes to what was then called Aegis Advanced Capability Build (ACB) 12 — now commonly referred to as Baseline 9.

The ships would be able to fight the emerging threat of ballistic missiles as well as aircraft and cruise missiles using upgrades to the Lockheed Martin SPY-1 air defense radar and a combination of Raytheon Standard Missiles (SM).

But in the last few years the Navy changed tack following the sequestration budget limits on the services following the passage of the Budget Control Act of 2011.

“Before we went to sequestration we were planning to do a bunch of stuff for the DDGs. Sequestration happened. Plans changed,” Capt. Dave McFarland, deputy of surface warfare (N96) for the Office of the Chief of Naval Operations (OPNAV) told USNI News.
“So going forward now we have to be strategic on the way we apply priorities to our ships and our modernization programs.”

Last week, USNI News reported the Navy would not upgrade 21 out 28 Flight I and II DDGs to the IAMD Baseline 9 standard and the ships would instead have an upgrade focused on hull, mechanical and electrical (HM&E) systems.

Based on the Navy’s historical record — ships with HM&E centric availabilities can become targets of decommissioning through obsolescence.

McFarland — who sits on the U.S. Naval Institute’s board of directors — and others in N96 insisted the ships would remain in the fleet to their expected 35 year service life even with the reduced scope of Aegis weapon system upgrades for the older ships.

The new and cheaper plan will improve the Flight I and II ships — with the exception of seven that will be upgraded to Baseline 9 — to a BMD standard of 4.1 from the original 3.6 baseline but retain the legacy military standard (MILSPEC) computers.

The ships with the full Baseline 9 upgrade — including an upgrade to BMD 5 — will shed their 1980s era AN/UYK-43 32-bit MILSPEC computers, completely strip out the ship’s combat information center and install a new series of commercial off-the-shelf (COTS) servers to process the targeting information from the ship’s SPY-1 air defense radar.

The split in midlife upgrades will create two types of Burkes — legacy MILSPEC ships with stable but older hardware and COTS ships that require more work upfront but are more easily upgraded.

“It’s the tradeoff of taking a reliable system tweak it and get as much horsepower out of it as I can based on how much life it has left and invest in the future capability in those COTS based ships,” Lt. Cdr. Jason Deutsch, N96’s Aegis Combat System Branch Head, said on Thursday.

The cost of the COTS system — in both time and money — was a major factor in the decision to scrap the full Baseline 9 upgrade in the older ships, according to N96.

The MILSPEC, BMD 4.1 plan for the 21 older Flight I and II DDGs will cost $112.7 million and runs for about 6 months, according to information from N96 provided to USNI News.

The full COTS, BMD 5.0 and Baseline 9 upgrade costs $183.8 million and takes more than a year and a half to complete.

Each Arleigh Burke destroyer (DDG-51) in the Aegis modernization program is planned to receive a full hull, mechanical and electrical (HM&E) refresh to care for the ships most basic systems.
The ships will also receive a significant upgrade in its ability to detect and attack submarines as part of the Lockheed Martin’s AN/SQQ-89A(V)15 anti-submarine warfare upgrade.
The difference lies in upgrading the ship’s ballistic missile defense (BMD) and air defense capability.
The 1980s era military standard (MILSPEC) AN/UYK-43 32-bit computers on most Flight I and all Flight II DDGs will see a software upgrade from the current BMD 3.6 baseline to BMD 4.1 and the installation of a ballistic missile signal processor to improve the ship’s SPY-1 air defense radar. The 4.1 upgrade will allow the DDGs in the MILSPEC program to take on so-called “sea based terminal” ballistic missile threats.

Seven Flight I and all 36 Flight IIA DDGs will undergo a much more through upgrade — requiring stripping out the ship’s existing computers and combat information center (CIC) and installing commercial off-the-shelf (COTS) servers and Lockheed Martin’s Multi-Mission Signal Processor to the SPY-1 radar. Combined with new software, the ships will operate on the BMD 5.0 standard, which will allow the ships to counter ballistic missile threats as well as cruise missile and aircraft.

The Missile Defense Agency (MDA), in partnership with the Navy, is contributing $42 million per ship for the BMD component as an adjunct to its strategic BMD mission.

“The attractiveness is they can be installed in half of the time and half of the cost and [part of] the cost is borne by MDA,” said Capt. Dominic DeScisciolo, deputy, operations, maintenance and modernization (N96G) for OPNAV, told USNI News.
“We’re getting a lot of bang for the buck in the end. All 62 ships will be modernized.”

Outside of the AAW and BMD missions, the ships will also receive a boost in their anti-submarine warfare (ASW) equipment with the inclusion of Lockheed Martin’s AN/SQQ-89A(V)15 upgrade.

“We’re not walking away from the multi-mission capability of a guided missile destroyer, McFarland said.
“In fact we’re doubling down on that capability.” 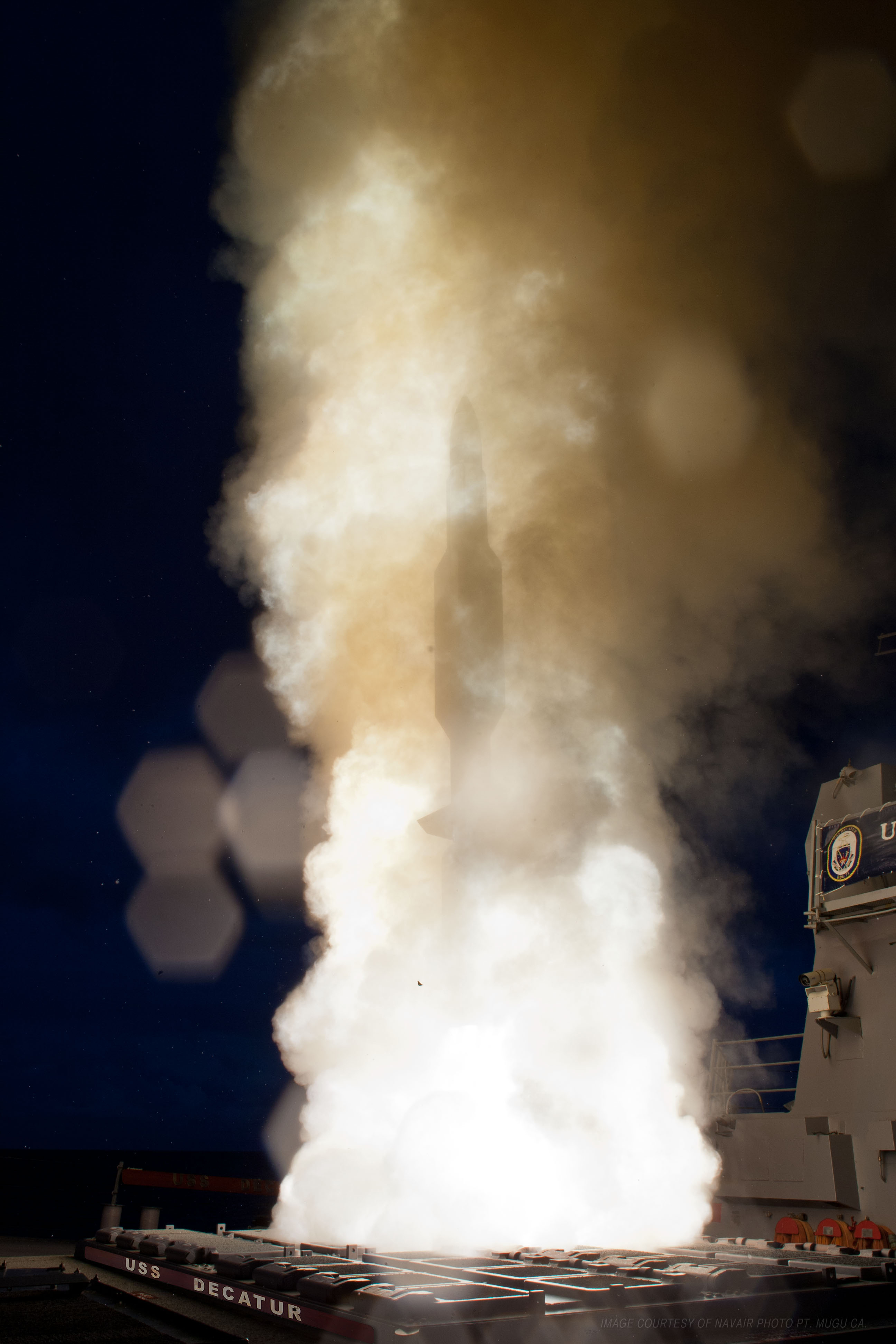 Standard Missile-3 (SM-3) Block 1A interceptor is launched from the guided-missile destroyer USS Decatur (DDG-73) during a Sept. 10, 2013 BMD test. US Navy Photo

The biggest difference between the legacy BMD 3.6 software versus the 4.1 upgrade is the ability for the ship to intercept so-called sea based terminal BMD threats — short-range missiles on their final path to the target and a more sophisticated interceptor.

“They’re going to have a ballistic missile signal processor and they are going to be able to fire the SM-3IB missile,” Kilby said.

But like the older versions, BMD 4.1 won’t be able to fulfill the traditional air defense role at the same time its set for the BMD mission.

The BMD 5 upgrade — included with Baseline 9 — allows ships to do both simultaneously.
In addition to the cost and time savings, the move does a better job to sate the various U.S. international combatant commands (COCOMS) demand for BMD ships, N96 said.

That COCOM demand is pushing to get as many BMD capable ships out there as a priority.

In the last several years, the Navy was tasked to focus more of its efforts on Aegis ballistic missile defense.

In conjunction with the MDA, the service is a key component of the European Phased Adaptive Approach (EPAA) with four BMD destroyers based at Naval Station Rota, Spain and Aegis Ashore installations in Romania and Poland. 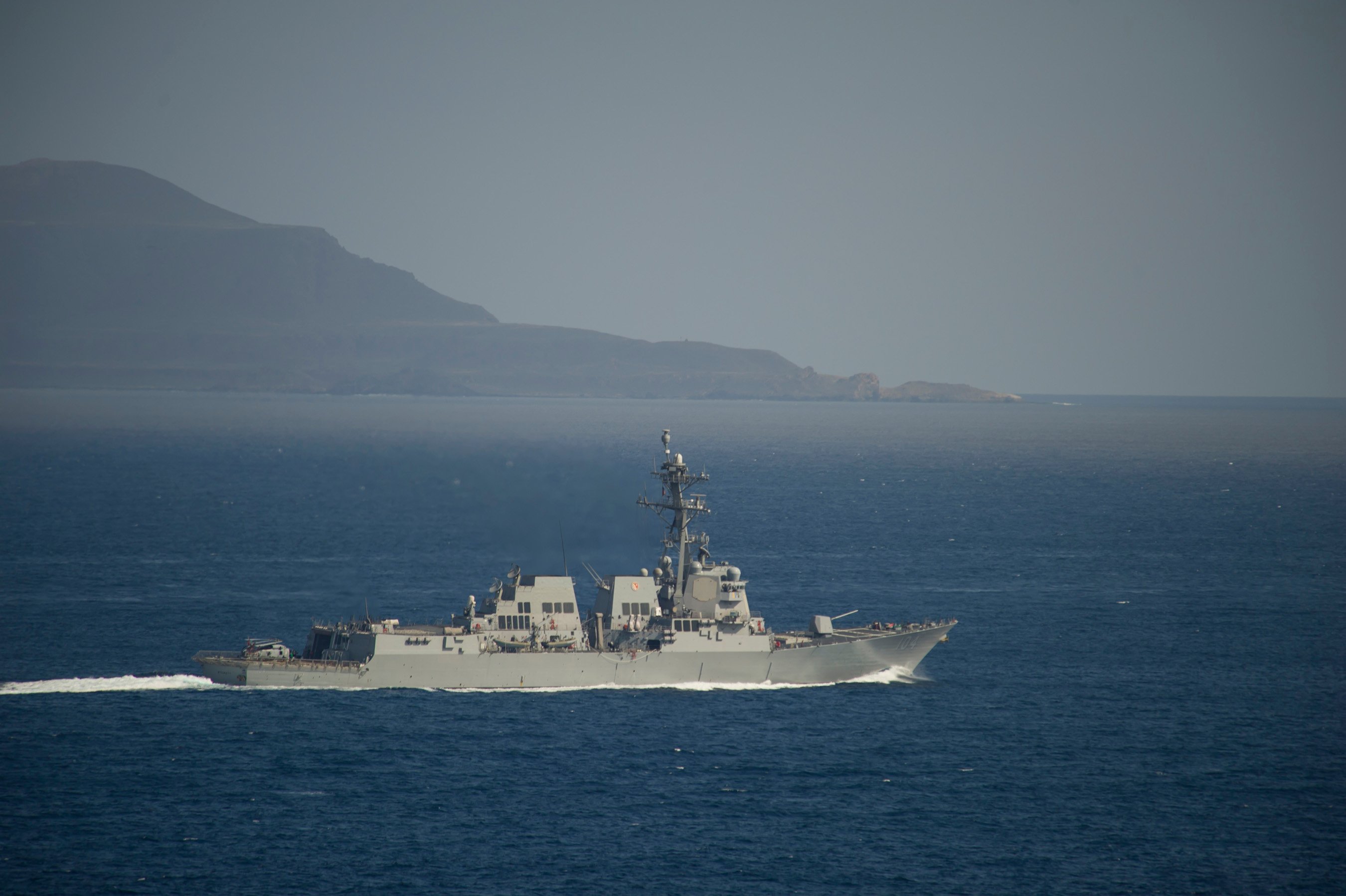 The change in the upgrade posture from all 62 DDGs to Baseline 9 to the tiered upgrade model was born under the pressure of sequestration and COCOM demand but not telegraphed to interests outside the Navy.

All legislative and naval sources outside of Naval Sea Systems Command and N96 were unaware of the changes in the DDG upgrades when contacted by USNI News in the last several weeks during the reporting for last week’s story.

N96 admitted it could have done a better job informing more on the change.

It’s unclear if N96 will receive legislative push back from the change in the upgrade program.

Several congressional sources told USNI News they were waiting for more detail on the plan before they would comment on the restructured Aegis modernization program.

“When you look at the merits of our plan we are able to retain these destroyers, get them updated to meet fleet demands and we are doing that in a way that is fiscally responsible,” McFarland said in a separate statement to USNI News on Tuesday.
“These are the discussions we have been having with the Hill and we look forward to continuing these discussions regarding our plan.” 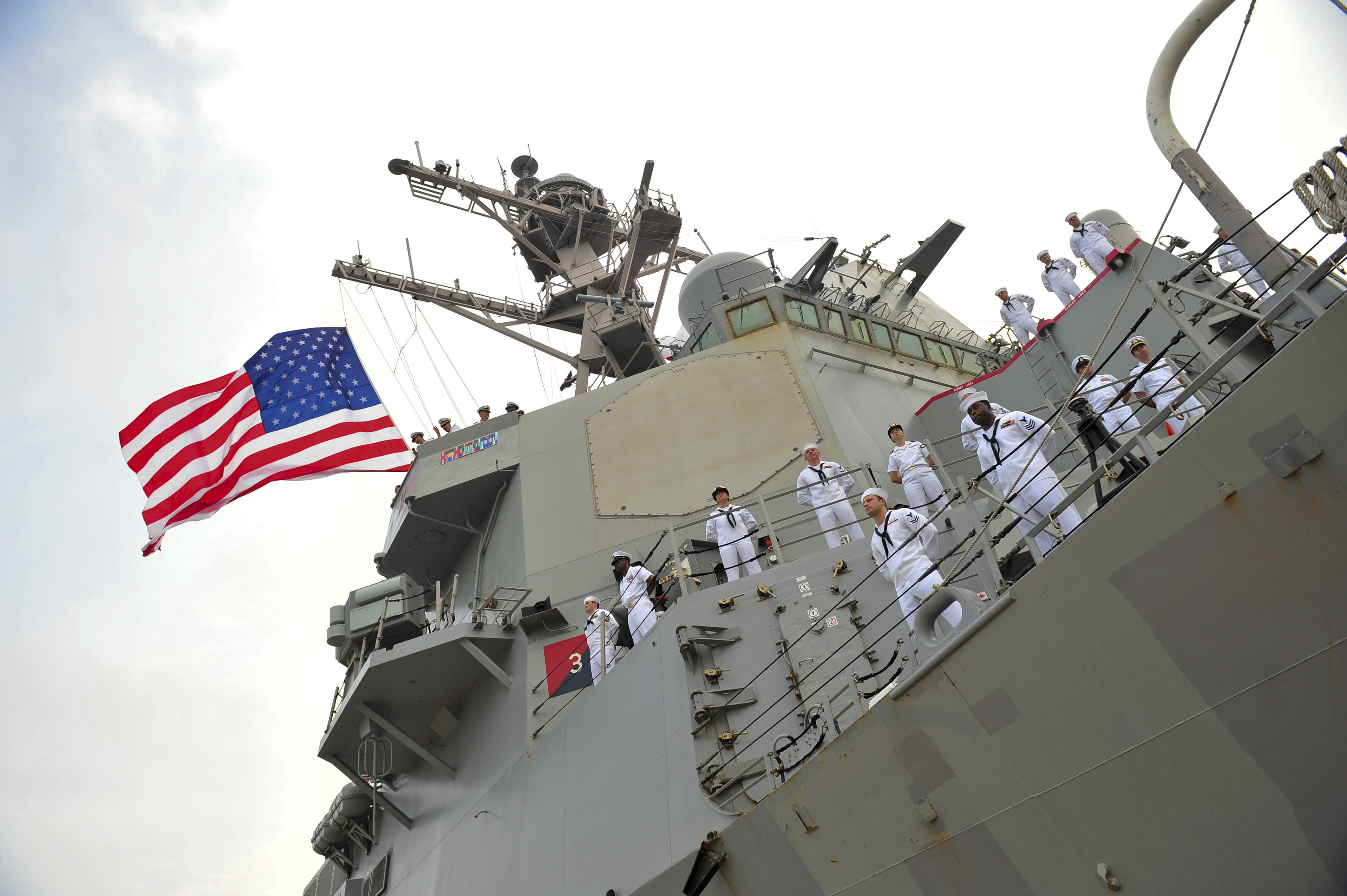 The Navy is now balancing how it can upgrade the ships quickly and meet COCOM demand for BMD ships.

Under the new Aegis modernization plan, N96 is looking to wring out cost savings by creating more standardized versions of DDG Aegis systems and software between the two versions.

“We want to get down to two baselines,” Kilby said.
“You’re either in the COTS family or the MILSPEC family and that one will make life easier from a maintenance standpoint, a school’s standpoint and a cost standpoint.”

N96 has completed the HM&E upgrades to ten Flight I and II ships and currently has USS Barry (DDG-52) and USS Benfold (DDG-65) undergoing a full Baseline 9 upgrade.

Strapped for cash, the officials at N96 say that current two-tied approach is the most cost effective way forward to strike the balance without relief from the sequestration cuts.