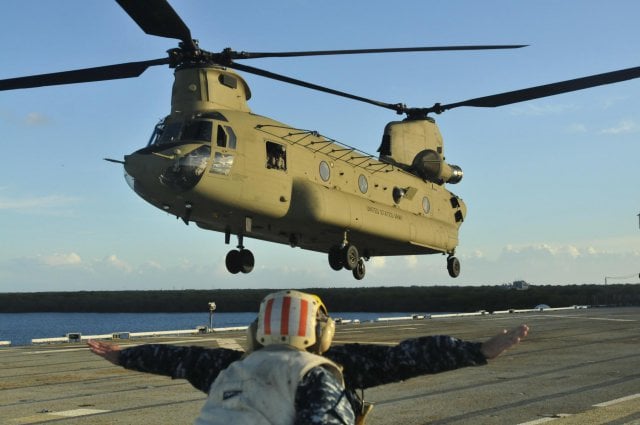 A US Army CH-47 Chinook lands on the USS Tarawa (LHA-1) during deck qualification in the Pacific Ocean, July 19, 2013. US Army Photo

The key to success for operations in the Pacific is mobility, but having sufficient resources to meet the vast requirements—even for training—across the next five years is in serious question.

Lt. Gen. John Wissler, commanding general of the III Marine Expeditionary Force, said “We don’t even achieve those 33 ships” [the minimum needed for amphibious operations by the Navy and Marine Corps] over that time.
To meet the combatant commanders’ stated requirements would require more than 50 ships.

Vice Adm. Scott Swift, director of the Navy staff, said those ships are over utilized now and are being pressed to work even more—delaying maintenance to maintain forward presence.

While leveraging other types of vessels, such as oilers, to supply communications connectivity or emptying pre-positioned ships to support amphibious operations works in exercises, “We need those warfighting ships to do Phase 2 and 3 things,” said Lt. Gen. John Toolan Jr., commander of the I Marine Expeditionary Force.
He also expressed concern over the reduction of maritime preposition squadrons from three to two in the Pacific.

Looking ahead to the Army’s efforts to become more expeditionary in the Pacific, Swift said during a panel discussion at the Navy League’s Sea-Air-Space 2014 exhibition, the ability to operate together as the Marine Corps and Navy do in amphibious operations “does not happen overnight.”

The Army is “looking hard to get their forces into those countries,” such as the Philippines, Thailand, and Singapore; but having “the light touch” of the Marine Corps in not requiring a large land presence, “that’s the challenge they have,” Toolan said.

The Marine Corps can operate and train with forces there “and then get out of town,” he added.
In answer to a question from USNI News, Lt. Gen. Terry Robling, the senior Marine in the Pacific, said the Army’s “Pacific Pathways” plan is to use Military Sealift Command ships near Joint Base Lewis-McChord, Wash., to carry equipment and some soldiers to the Philippines and then fly other soldiers and lighter equipment on C-17s into the region.

The movement would involve two companies of soldiers and the command and control element of a brigade and then rotate similar-sized units in and out over 18 months or so.

The Army “will learn a lot from that,” including costs of operations as an expeditionary force, Robling said.
Rear Adm. Michael McAllister, the Coast Guard’s director of enterprise strategy, said his service was too small to greatly expand vessel presence in the Pacific “because of challenges [it faces] across the globe. “We’re stretched a bit thin.” But he said the Coast Guard was looking at ways to increase its physical presence by putting law detachment elements on board Navy ships transiting Oceania, the South Pacific, toward Central Command, for example, to enforce fishery laws.

He added, the Coast Guard “gets access where gray hulls are not as welcome” in working with the nations in the region.

“Our humanitarian and constabulary missions bring nations together.”
Robley said, Navy and Marine Corps efforts in working with nations in the Pacific in the past too often were piecemeal and not coordinated. The mistake “I made was looking too much through a U.S. lens” in assessing the situation in the region, Swift added.