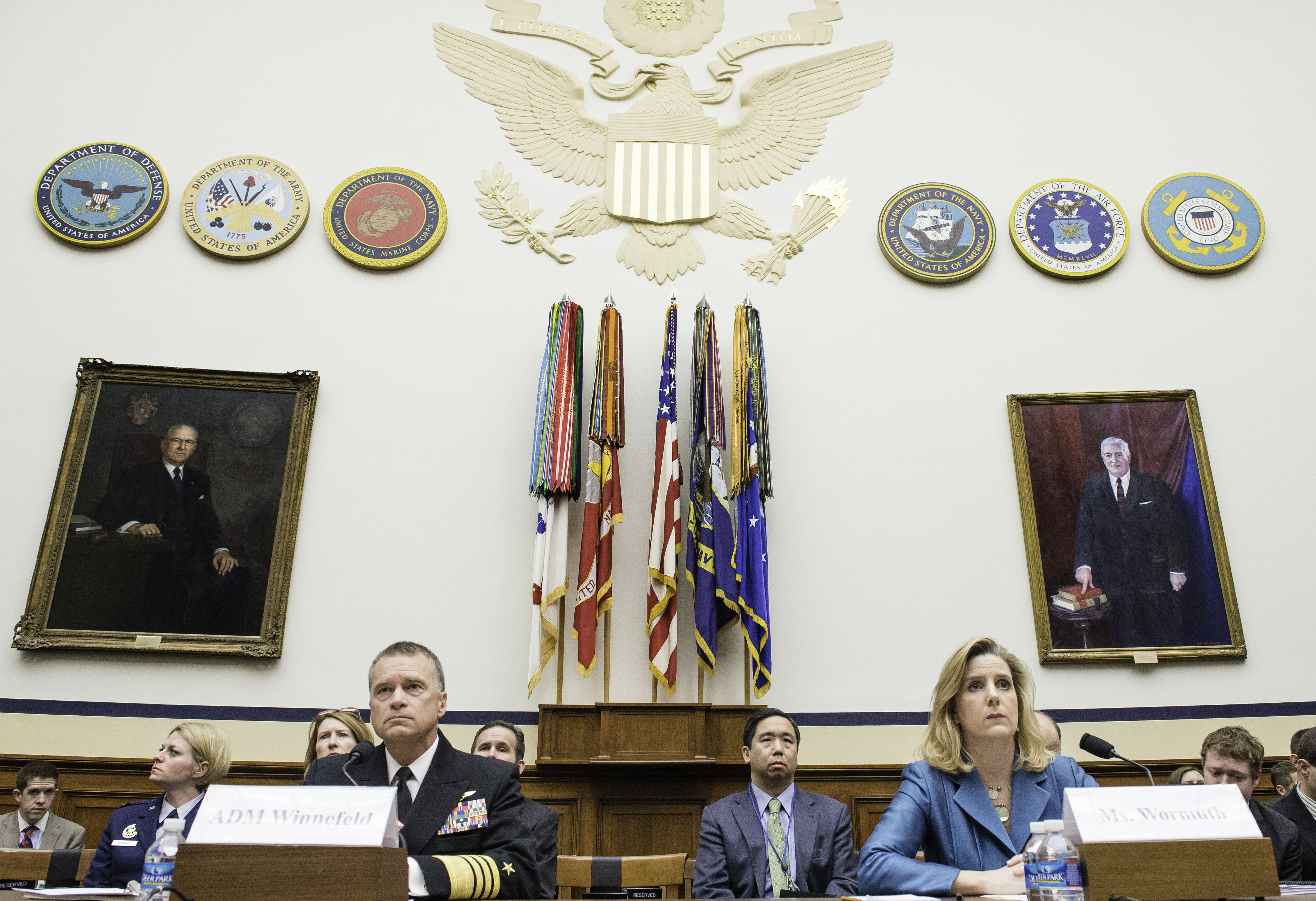 Signaling a possible attempt to change the law requiring a periodic review to Capitol Hill of the Defense Department’s long-term measurement of risk this session, the two senior Republicans on the House Armed Services Committee expressed skepticism over continuing the Quadrennial Defense Review process at a Thursday hearing. They did not detail what or how they would replace it.

Chairman Buck McKeon, (R-Calif.), who earlier rejected the 2014 Quadrennial Defense Review, said he want to “to get something . . . that we’d get more benefit from.”

Earlier, Adm. James Winnefeld, vice chairman of the Joint Chiefs of Staff, said in answer to Texas Republican Rep. Mac Thornberry’s question, “This is a valuable process in the department [and] to a new administration coming in” because, in part, it is a “little bit more of a joint process” in thinking about the 20-year future of the department.

McKeon, in his opening statement, said this review “leads only to justification for programs in [the president’s] budget” request for Fiscal Year 2015 and accepts a 2012 defense strategy of protecting the homeland, building partner capacity and capability, and projecting power while ignoring “$320 billion in cuts not counting sequestration.”

As the hearing ended, he added, “It’s something we’re going to have to look at” after Christine Wormuth, one of the principal authors of the review, said it took six months and a large number of man-hours to complete. She said she would reply for the record on exact figures.

Thornberry is the committee vice chairman, and McKeon has announced he will retire following this session.
Earlier this year, USNI News reported McKeon’s charge to Thornberry to take a hard look at the way the Pentagon does business and the laws and regulations covering those operations. The public skepticism at the hearing over the QDR reflects that charge. “We need to thin [Title 10] out” and “squeeze away the barnacles” where needed, Thornberry told a Washington think tank in January.

The hearing on the review was dominated by the “what ifs” of sequestration returning in FY 2016. Ranking member Rep. Adam Smith (D-WA) said the “greater challenge” [in looking ahead even two or three years] was an “uncertain budget future.”

After acknowledging that, he said the review “does not prioritize very well. If you have 20 top priorities, you have none.” It is a document that says, “Here’s everything you ought to be worked up about.”

Wormuth, deputy under secretary for strategy, plans and force development, said the department faced “especially tough choices” over reducing capacity—end strength, aircraft and ship availability in developing this review.
Even without sequestration returning, Winnefeld added, “We are pushing very hard on the high end of moderate risk” in a number areas now—such as modernization. “This budget is fragile” and required “a re-balance across the entire department. We’re going to need considerable help from Congress,” particularly in holding down compensation costs and cutting excess infrastructure as the Pentagon shifts from its counterinsurgency operations of the past 13 years.

Wormuth said the review did assume $30 billion in savings by curbing the rise in compensation costs and eventually $2 billion in savings annually through base realignment and closure. If the Defense Department doesn’t receive congressional approval in those two areas, “We’d have to find those savings somewhere.”
McKeon said that the review and earlier testimony at hearings on the budget request did not make clear “the reality of 420,000 [active Army], 175,000 [active Marine Corps], taking down a carrier, cruisers” because the Budget Control Act of 2011 was still law.

Winnefeld said, “It’s stark; it’s real.” The Defense Department “is trying to make clear why we need the additional resources” in the current request and the removal of sequestration, Wormuth added.

In light of events in Eastern Europe, the vice chairman said that if needed, the United States could return forces to Europe, but the state of their readiness was in question. The review was prepared before Russia moved into Crimea. He said that might have changed the tone of the review in some respects, but the focus on Asia and Pacific would remain in place.

Wormuth said that the nation “continues to have the capacity and capability to take direct action” if needed against transnational terrorist threats like those coming from Syria and “is working with partners like Yemen” and in North Africa to improve their internal security. She said that as operations wind down in Afghanistan more special operation forces would be available for missions in building partner capacity around the world.
She noted the projected increase in the size of special forces in the budget request and review as the department’s commitment in this arena.

Saying the “way wars are fought is changing,” Winnefeld added the Pentagon’s approach to cyber is “almost a mirror of nuclear deterrence” of denying access, being resilient, and ensuring potential adversaries know there are costs to hostile cyber actions in and out of that domain.