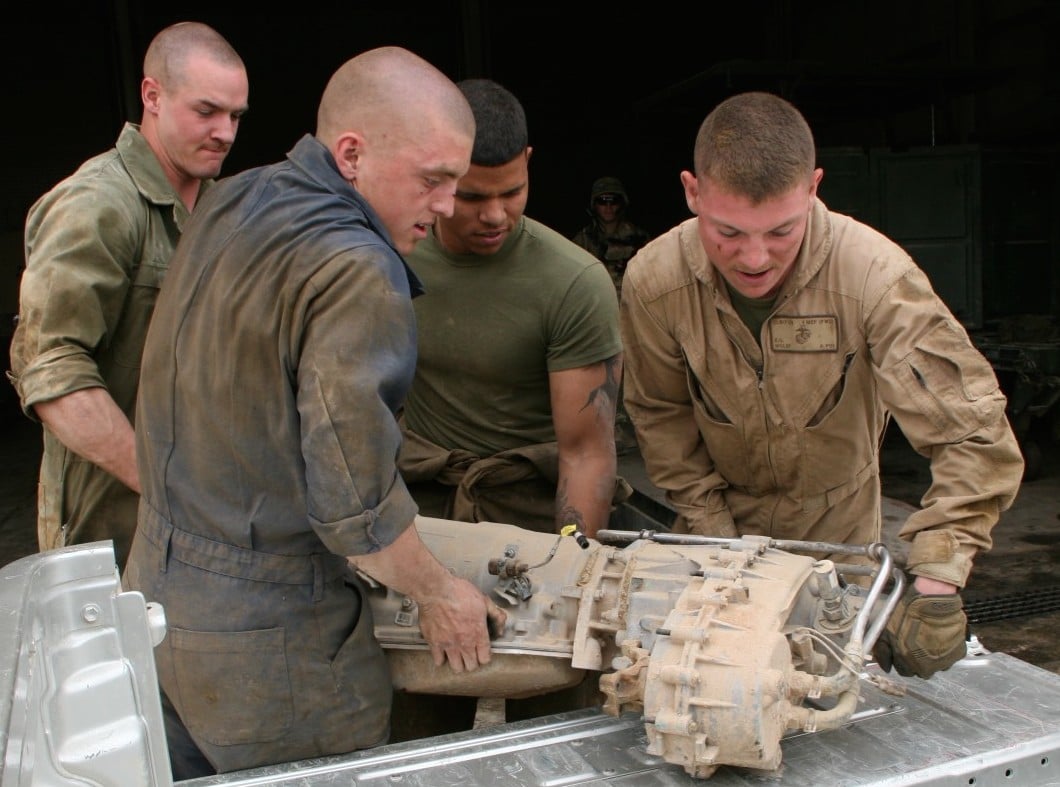 Marines with Combat Logistics Company, Combat Logistics Battalion 7 work together to put a transmission in the back of one of their vehicles aboard Camp Shorabak, Helmand province, Afghanistan on March 12, 2014. US Marine Corps Photo

The Navy will likely need five more years of funding above its base budget to send ships through dry dock to overcome years of deferred maintenance, and the Marine Corps’ needs two or three years of additional funding to reset its equipment, senior sea service officers told the House Armed Services Readiness Subcommittee on Thursday.

Vice Adm. Joseph Mulloy, deputy chief of naval operations for integration of capabilities and resources, said there was “a critical timing element” to putting ships into dry dock because the Navy never did the routine maintenance that did not require major work and extended time out of service.

Marine Lt. Gen. Glenn Walters, deputy commandant for programs and resources, said there were “phasing issues” in moving equipment from theater to the depots for work and then back to the field.
Walters estimated that about 80 percent of the Marine Corps’ equipment has been moved from Afghanistan and about half of that has been reset.

With military operations winding down in Afghanistan, Mulloy and Walters stressed the continuing need for congressional support for these above base budget funds. The administration put a placeholder figure of $80 billion for all the services in its budget submission for Fiscal Year 2015 for Overseas Contingency Operations (OCO). What the exact request will be is not known.

Walters said, “We’re not going to not do it” to meet requests for Marine Corps assistance in emergencies. He said this would be the case even if money for Overseas Contingency Operations has not been approved at the start of the fiscal year Oct. 1.

Walters described a gap that exists between enduring requirements such as missions to Africa and the Middle East and the services’ base budgets.

Mulloy said the Navy would have a cashflow problem of having to move money from the base budget to cover these operations, “if I don’t have a bridge supplemental” by the beginning of the fiscal year.

The bridge could be for three months, he added. Using Central Command as an example as American ground forces leave Afghanistan, he said, “The demand for naval presence [there] will remain high.”
When asked about the impact of these fiscal constraints on Navy operations in the Pacific, Mulloy said they “will have a ripple [effect] over there” if the top line of the budget does not go up for missions now paid for out of OCO funds.

Mulloy and Walters said they needed the flexibility offered in the Rapid Innovation Fund and reprogramming authority to meet emerging challenges. Mulloy cited the Navy’s recent placing of new guns and Griffin missiles on patrol craft operating in the Persian Gulf as to how it used these authorities.
The transition from using these special funds – especially OCO money — to the base budget “must be done in … an acceptable way,” Mulloy said.