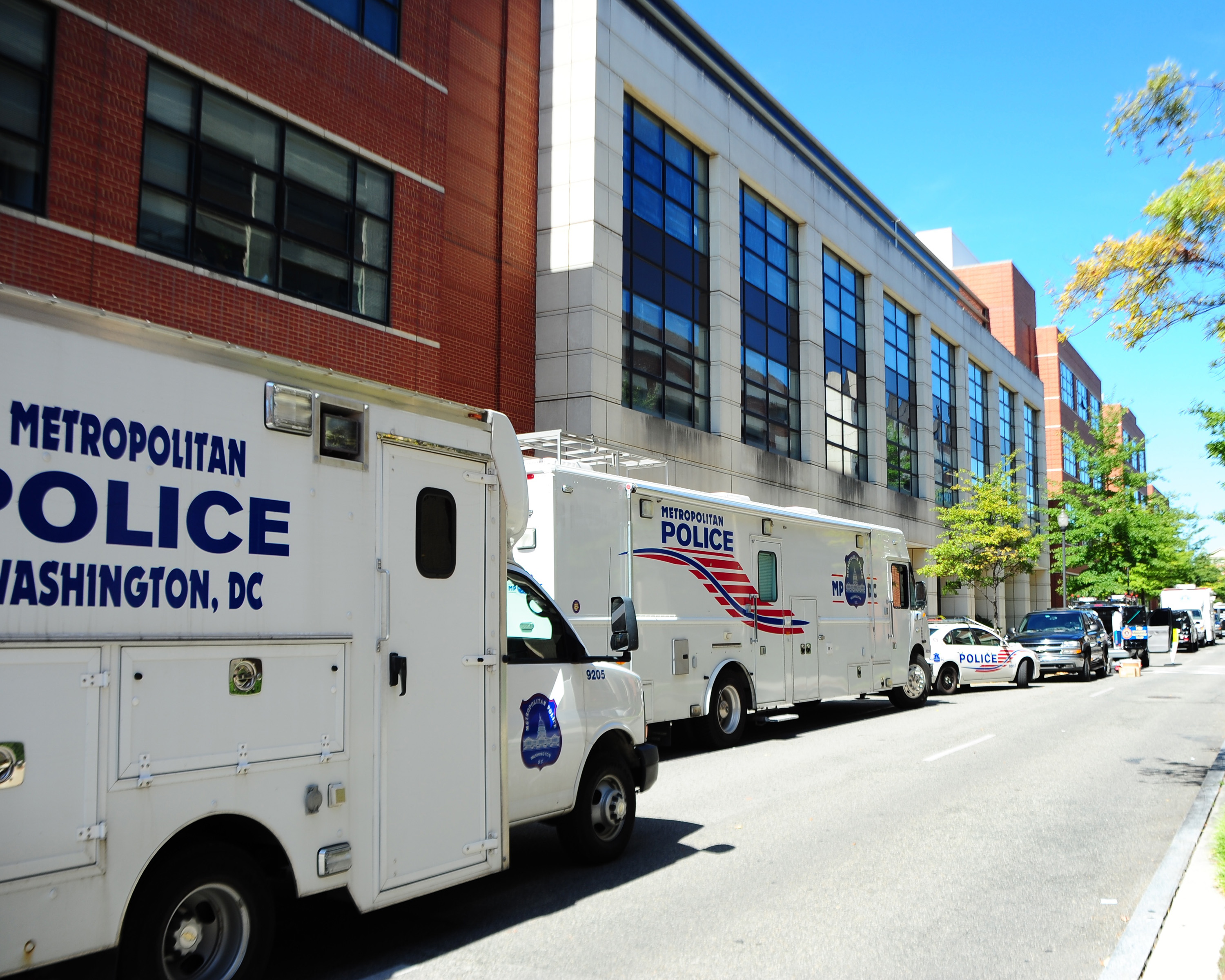 At 0744 on the morning of September 16, 2013, Aaron Alexis, an employee of The Experts, Inc., drove through the 6th Street Gate onto the Washington Navy Yard (WNY). He used his valid Common Access Card to gain access to the base. He parked in Building 28, a garage across the street from Building 197, the Naval Sea Systems Command (NAVSEA) Headquarters.

At 0802, Alexis entered Building 197, where he had been tasked to perform updates to classified computers, carrying a concealed, sawed-off shotgun. Alexis used a valid temporary access badge to go through the electronic badge reader and past the guard station. He proceeded to the fourth floor and entered a restroom.

At 0815, he emerged from the restroom carrying the sawed-off shotgun and began shooting. The initial report of an active shooter was made at 0816. Law enforcement forces from the WNY and external agencies responded quickly and effectively to contain and eliminate the threat. Alexis was shot and killed at 0925.

Before he was stopped, he had killed twelve personnel and wounded four more. Post-incident response efforts began immediately to support the wounded, families of the deceased, and affected employees. The overall post-incident response was timely, plentiful, and responsive to the needs of those affected by the incident.

On September 25, 2013, the Secretary of the Navy appointed Admiral John Richardson, USN, to conduct an in-depth investigation into the full range of security, contractor, personnel, and other factors related to the September 16, 2013 incident at the WNY. The investigative effort was organized into five areas:

2. The personnel security program (PSP), designed to vet applicants for initial authorization to access secure assets; and once approved, to continuously evaluate personnel for suitability for continued access.

4. The incident response and emergency management programs, designed to respond, to contain and eliminate a threat should the PSP and force protection barriers fail.

5. The response after the incident, designed to mitigate the damage to people, property, information systems and operations after an incident occurs.

The cause of this incident was that Alexis, using valid credentials, entered the WNY with a concealed personally-owned shotgun, and used that weapon to shoot and kill 12 personnel in Building 197. This investigation concluded Alexis was an insider threat. The insider threat obtains and uses valid credentials to do damage from inside the force protection defenses.

Before September 16th, Alexis was observed by several people, including his supervisors at The Experts, Inc, and HP Enterprise Services LLC, to behave in a way that raised concerns about his mental stability and presented indicators that he may cause harm to others. This information was not reported to the government as required. Had this information been reported, properly adjudicated, and acted upon, Alexis’ authorization to access secure facilities and information would have been revoked.

The findings of this investigation fall into three groups, depending on their potential to prevent the incident on September 16, 2013:

Category A: Findings relating to the contractors’ compliance with the PSP. For these findings, had proper procedures been followed, the chain of events that led to the WNY shooting incident on September 16, 2013, would have been interrupted.

1. Senior managers at the information technology company “The Experts,” a subcontractor to HP Enterprise Services, LLC, for the Navy Marine Corps Intranet Continuity of Services Contract, failed to meet their contractually-required responsibility to continuously evaluate their employee Alexis and report adverse information to Department of Defense Central Adjudication Facility and U.S. Navy installation commanders. Specifically, the company leadership decided not to inform the government of adverse information concerning Alexis’ emotional, mental, or personality condition, even when they had concerns that Alexis may cause harm to others, as required by the National Industrial Security Program Operating Manual.

Category B: Findings relating to other commands’ or organizations’ oversight of and compliance with the PSP with respect to Alexis. For these findings, had proper procedures been followed, the chain of events that led to the WNY shooting incident on September 16, 2013, may have been interrupted, earlier in Alexis’ career.

3. Department of the Navy Central Adjudication Facility did not resolve important questions that arose from gaps and inconsistencies in the investigation report and failed to retain the required record of its adjudicative process. This hampered the investigation’s ability to understand the factors that led to Department of the Navy Central Adjudication Facility’s decision to grant Alexis a SECRET security clearance.

Category C: Findings relating to the conduct of force protection and emergency management on the WNY on September 16, 2013. For these findings, even had proper procedures been followed, there would have been no direct impact on the chain of events that led to the WNY shooting incident on September 16, 2013. These findings still require correction to address critical performance gaps and improve the WNY’s capability against a wide range of threats.

8. The access control methods and practices employed by Naval Support Activity Washington and Naval Sea Systems Command to vet unescorted visitors do not comply with local, Department of the Navy, and Department of Defense instructions.

9. The Naval Support Activity Washington Naval Security Forces and Naval District Washington Fire and Emergency Services’ response was swift and heroic. At the operational level, Naval Support Activity Washington and Naval District Washington Operations Centers did not effectively communicate and coordinate actions with the Metropolitan Police Department Unified Command until after the threat had been neutralized. As such, Navy Command and Control assets did not play a meaningful role in the initial incident response.

This report presents recommendations to improve Navy capability against all threats, with a focus on the insider threat. Immediate actions to address Category A, B and C findings will improve PSP execution by DON organizations and contractors, and critical gaps in the force protection and emergency management programs on the Washington Navy Yard.

1. Immediately reinforce with DON leadership and DON contractors and subcontractors their responsibility to comply with existing PSP requirements as laid out in SECNAV M-5510.30, Department of the Navy PSP, and the National Industry Security Program Operating Manual including prompt and accurate reporting of adverse information and removing access to secure assets when warranted.

2. Direct ASN (M&RA) and Deputy Under Secretary of the Navy for Plans, Policy, Oversight and Integration to develop DON training material, supplemented by a case study based on the WNY shooting incident, to train personnel on the principles of the PSP, the importance of compliance, and consequences of non-compliance. This material should be incorporated into leadership schools and civilian continuing training programs.

3. Direct CNO and CMC to order self-assessments, at the unit level, of compliance with the requirements of SECNAV M-5510.30, including security manager training, reporting of adverse information, commentary in performance evaluations regarding handling of classified material, and follow up of Department of Defense Central Adjudication Facility (DoDCAF) letters of concern.

4. Direct ASN Research, Development & Acquisition (RD&A) to clarify expectations for Program Executive Offices, Program Offices, Contracting Offices and Commands regarding oversight and administration of the security aspects of DON contracts. This should include audits of contractor compliance with PSP requirements. As part of this effort, ASN (RD&A) should validate that DON contracts include appropriate security clauses.

5. Direct ASN (M&RA) to require that all adverse information developed during investigations, deliberations, and formal adjudications, beginning with the recruitment process, be thoroughly documented, properly retained, and readily accessible by authorized personnel. This will help to provide a complete and detailed record to support future suitability determinations.

7. Direct that ASN (M&RA) develop DON training material, supplemented by a case study based on the WNY shooting incident, to train personnel on the principles of force protection, the importance of compliance, and consequences of non-compliance. This material should be incorporated into leadership schools and civilian continuing training programs.

8. Direct Chief of Naval Operations (CNO) and Commandant of the Marine Corps (CMC) to update Antiterrorism Level 1 Awareness Training to include lessons learned from the Fort Hood incident and the WNY incident.

9. Direct the CNO and CMC to conduct a self-assessment of installation compliance with higher headquarters directives in force protection and emergency management. This assessment must focus on actual compliance at the installation, not a review of administration, and should include:

10. Direct the CNO and CMC to identify, prioritize and execute the most cost effective, high impact actions that could mitigate known force protection and emergency management capability gaps. This should include effective use of random antiterrorism measures to deter, detect and disrupt potential attacks, revitalized training, and the establishment and subsequent exercising of mutual aid agreements to enhance incident response.

11. Direct the CNO and CMC to conduct a review of DON requirements for force protection and emergency management as compared to the available resources and assess threat. This review should also address how the operational commander and the resource provider reach agreement on the final resource distribution as balanced against the resultant risk.

Further, on perhaps a less urgent basis, in the interests of improving capability against the insider threat, in particular the effectiveness of the PSP, this report further recommends:

14. That the Secretary of the Navy recommend the Secretary of Defense establish a single authority, who will report directly to him, to compile all recommendations and direction resulting from the investigations into the Fort Hood shooting, USS MIAMI fire, the release of information by Manning and Snowden, the WNY shooting, and other incidents that may be pertinent. An assessment should be done to determine which actions have been completed. Those recommendations that remain open should be prioritized and overseen to completion. A routine report to the Secretary of Defense should be made to formally record progress and completion of these actions.