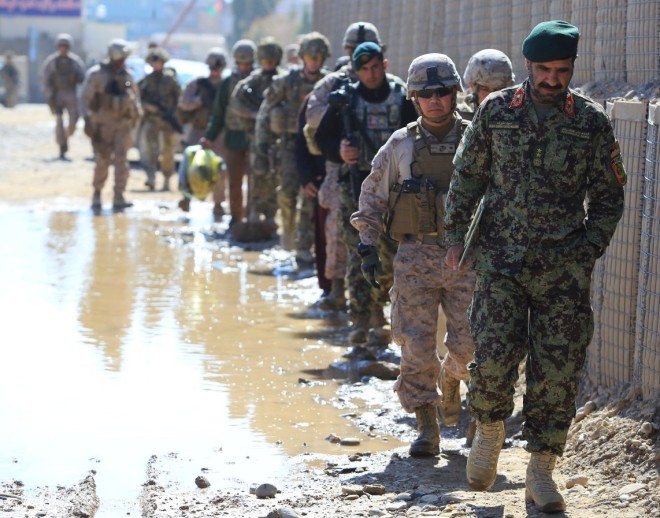 Drawing on the American experience of leaving Iraq without an agreement on future presence, the Commandant of the Marine Corps said, “I don’t want that to happen in Afghanistan.” Gen. James Amos, speaking on Tuesday at the Carnegie Endowment for International Peace in Washington, added, “We can ill afford to simply pull out and go home,” noting the tumult now convulsing parts of Iraq.

Afghanistan’s president, Hamid Karzai, has said he will let his successor sign any future agreement with the United States and NATO on their continued presence after 31 December. But the clock is winding down. Presidential elections in Afghanistan are scheduled for April; if there is no clear-cut winner, there would be a runoff at a later date. How long after that a new administration would take power is equally unclear.

At some point, “physics begins to play” on meeting the deadline to pull out equipment and troops. Amos said the Marine Corps has extracted about 75 percent of the equipment it had in the country; about 4,400 Marines remain there.

“I want to see Afghanistan . . . succeed maybe not to my standards”—but on its people’s terms, he said.

Looking at Marine operations in the southern part of the country, especially in Helmand Province, Amos said, “It’s about as good as it is going to get.” Marines there and other allied forces—especially the British—and civilians “have set the condition for the people . . . to succeed” in establishing security and allowing government there to begin functioning in a way.

He said he is going to Helmand and Nimroz provinces this weekend to meet with Afghan officials and review the situation. Looking ahead to the December pullout date, he said he believes “I think we will have done everything we can” by then, and “I feel good about it.”

Amos said the United States must remain engaged in the world and it is important to maintain a forward presence to respond quickly to events in a region.

“My sense is there will be no peace dividend,” he said, but the nation needed to set its priorities on what it wants to accomplish and what it can afford. There’s “no shortage of work” for the armed forces in the future, with all kinds of possible “thorny and nasty entanglements” in what he and others are calling the “new normal.”

“It’s not all going to be insurgency, but it will be among people,” a theme he used several times in answering questions about the future. “People count . . . their opinions count” in how they assess an American presence in their country. Using Anbar Province in Iraq as an example of turning opinion around, he said, “It just took longer for the people to understand we’re not the enemy” and turn on al Qaeda insurgents.

Much of the equipment that has been removed from Afghanistan and reworked is headed for the Pacific, Amos said. He added that five of the nation’s seven most important treaties are in the region that accounts for more than 60 percent of the earth’s surface, much of it water. Japan, he said, receives 100 percent of its oil via tankers using the Malacca Strait. Likewise, China receives the bulk of its oil through tankers transiting those waters.

“We’re rebuilding relations with countries like the Philippines” where “35 years ago we were asked to leave.” He also said the United States is building strong ties with Malaysia, Singapore, Thailand, and Vietnam, as well as strengthening relations with traditional allies such as Australia and New Zealand. Amos said he planned to travel to China this spring to meet with his counterpart and begin building military-to-military contacts to “take away some of the misunderstanding” between the two nations.

He said the Marine Corps “Reawakening” campaign—discipline, adherence to instructions, conscious and engaged leadership, and obedience—grew out of meetings he had with colonels, lieutenant colonels, and sergeants major over how best to emphasize and practice service values, “the soul of the Corps” that “makes the difference” between a Marine and anyone else.

“We saw the edges begin to fray,” he said, and the campaign is one way to strengthen values.

Amos said he and the Joint Chiefs of Staff support the creation of a general officer’s position stressing ethics. “We have a sacred trust that America has given us” as flag officers. “We don’t want to lose” that strong support from the public in ranking the integrity of the armed forces.