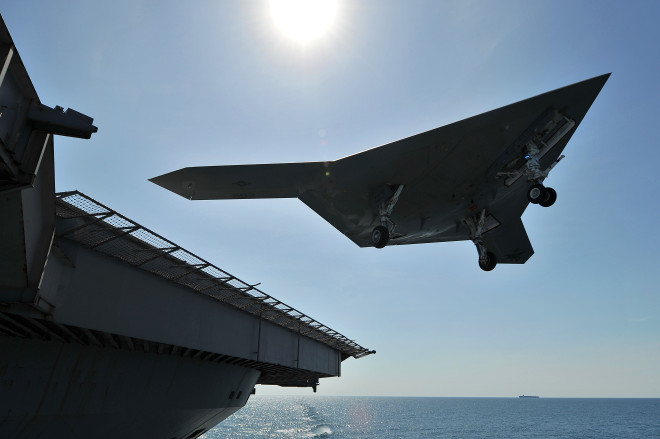 The U.S. Navy plans to take the Northrop Grumman X-47B Unmanned Combat Air System-Demonstrator (UCAS-D) aircraft out to sea onboard an aircraft carrier this summer to test how well it operates together with manned aircraft around the ship and on the flight deck.

During the two previous X-47B at-sea periods onboard USS George HW Bush (CVN-77) and USS Theodore Roosevelt (CVN-71) in 2013, while the unmanned demonstrator had a Boeing F/A-18 chase aircraft, the two types did not operate together on the carrier flight deck. This time around the manned F/A-18 and X-47B will operate from the carrier together cooperatively.

“We are going to do that, we are going to start to mature and discover and understand the best way to do what we call CONOPs—concept of operations—of manned and unmanned aviation in the carrier environment,” Winter said. “That’s very important.”

The testing would cover how the X-47B would integrate with manned aircraft both in the marshal stack in the airspace around the carrier and on the flight deck.

However, the 2014 summer at-sea period will not involve a full carrier air wing, because the Navy plans to use a crawl, walk, run approach to integrating unmanned aircraft onto the flight deck. Initially, the service will test the X-47B with the F/A-18, Winter said.

The plan is for fleet operators to understand exactly how an unmanned aircraft would work around the carrier flight deck and develops standard operating procedures, Winter said.

The idea is to reduce the risk for the operational follow-on to the X-47B called the Unmanned Carrier Launched Airborne Surveillance and Strike (UCLASS) aircraft, which is slated to arrive on the flight deck around 2020. “And when we do start doing flight tests with the UCLASS, it is not the first time that they have done that and we’re already ahead of the game,” Winter said.

Meanwhile, the X-47B will continue to fly at Patuxent River to refine the aircraft’s precision navigation technology, landing algorithms, ground handling and the bandwidth of its data-links, Winter said.

Beyond that, there might eventually be further technology maturation endeavors the X-47B program might be tasked with—the data from which will be transferred to the UCLASS program. “We will identify other elements that we want to use this for, and we will have the flexibility to do that,” Winter said.