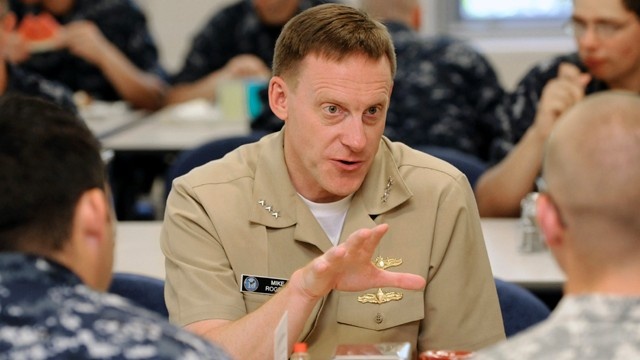 Vice Adm. Michael Rogers has been tapped to lead the National Security Agency. He is currently the head of U.S. Navy’s 10th Fleet. US Navy Photo

“I am pleased that President Obama has accepted my recommendation to nominate Vice Adm. Michael Rogers as Commander of U.S. Cyber Command,” Defense Secretary Chuck Hagel said in a Jan. 30 statement. “And I am delighted to designate him also as Director of the National Security Agency.”

Hagel said that Rogers, who is currently the commander of the US Navy’s 10th Fleet and Fleet Cyber Command, would bring “unique qualifications” as the NSA continues its mission and implements some reforms Obama has ordered.

The organization has been embroiled in controversy after former NSA contractor Edward Snowden revealed the scope of the agency’s massive foreign and domestic spying operations.

“This is a critical time for the NSA, and Vice Adm. Rogers would bring extraordinary and unique qualifications to this position as the agency continues its vital mission and implements President Obama’s reforms,” Hagel said. “I am also confident that Adm. Rogers has the wisdom to help balance the demands of security, privacy, and liberty in our digital age.”

“Rick brings outstanding qualifications to the job. And I know that both he and Vice Adm. Rogers join me in thanking Gen. Keith Alexander for his remarkable leadership of the NSA and Cyber Command for nearly a decade,” Hagel said.

The Navy has not announced who would take charge of 10th Fleet though current deputy commander, Rear Admiral Jan Tighe, is thought to be a likely candidate for the position.