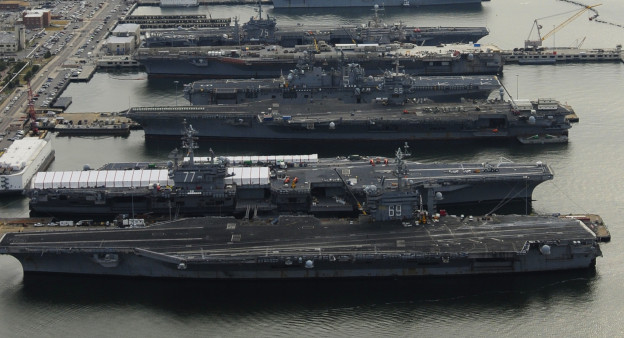 A bipartisan group of Congressmen have written a letter to the Secretary of Defense expressing their strong support for maintaining a fleet of 11 nuclear-powered aircraft carriers despite rumors the Pentagon is considering cutting the carrier fleet.

“We write to reiterate our strong support that the United States Navy should continue to require a naval fleet of no-less than 11 nuclear aircraft carriers,” reads the Tuesday letter address to Defense Secretary Chuck Hagel.

“With the United States entering an era where our sea-services are likely to be called on to provide more presence, deterrence, and engagement throughout the Indo-Pacific littoral and across the globe, we believe now is the time to reinvest in our fleet, not look for ways to reduce its size and accept greater risk.”

The Congressmen cited an October letter from Navy Secretary Ray Mabus, which had stated that the sea service would be unable to perform the missions laid out for it in the Defense Strategic Guidance. The letter also noted that the House of Representatives overwhelmingly voted to maintain a legal requirement for the Navy to maintain 11 operational carriers by a margin of 318 to 106.

“There is no doubt that there is enduring bipartisan support for a robust Navy supporting a capital fleet of 11 nuclear aircraft carriers,” read the letter.

In a separate statement emailed to USNI News on Tuesday, Forbes decried any move to reduce the carrier fleet.

“Such a reduction in the Navy’s carrier force would profoundly damage U.S. national security, limiting our ability to deter aggression around the world and respond to crises in a timely manner,” Forbes stated.
“It is unacceptable to pretend that the United States lives in anything less than an 11 carrier world given China’s growing assertiveness in the Asia-Pacific, rising instability in the Middle East and the persistent danger of global terrorism.”

The letter comes on the heels of a Jan. 26 report in Defense News that suggested that the Pentagon is considering retiring USS George Washington (CVN-73) before the Nimitz-class carrier enters refueling complex overhaul in 2016.

Commissioned in 1992, the multi-billion dollar warship is less than halfway through its 50-year service life. Meanwhile, the U.S. would continue to build new Ford-class vessels, the first of which is expected to cost $12.9 billion.