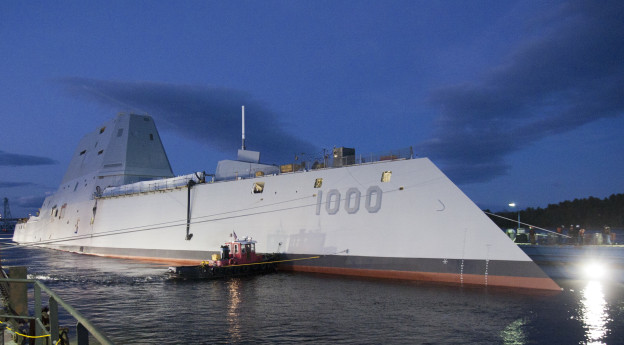 The Navy’s efforts to get its newest destroyer out to sea are on track, despite numerous setbacks to several of the warship’s key operating and combat systems.

Development and construction on of the three Zumwalt-class destroyer are all over 70 percent complete, with the DDG-1000 officially launched in October, program manager Capt. Jim Downey said Tuesday.

The DDG-1000, the inaugural shop of the class, is slated to undergo heavy weather sea trials later this year, Downey said during a briefing at the Surface Navy Association’s 2014 symposium in Crystal City, Va.

The those upcoming tests, according to Downey, will fall along the lines of more traditional sea trials conducted on previous Navy vessels.

However, he did note program officials were planning to take a somewhat more rigorous approach to the new warship, given it is the first vessel of its class.

Given the yet-unproven survivability and durability of the Zumwalt-class ship hull, program officials want to ensure the ship’s design and construction are durable enough to withstand the sea tests, he added.

The proposed heavy weather trials come on the heels of a series of fixes and modifications program officials were forced to adopt as part of the ship’s costly early development.

Navy leaders have overcome a majority of the challenges associated with the ship’s transition from an S-Band to an X-Band radar, according to Downie.

The rising cost of the transition forced the program to breach congressionally-mandated cost ceilings set under the Nunn-McCurdy Act early in the ship’s development.

Navy officials are currently working through the proposed modifications to the radar transition program, forced by the Nunn-McCurdy breach, Downey said Tuesday.

That work is being carried out at the Navy’s Surface Combat Systems Center in Wallops Island, Va, the program chief added.

As a result of that work on the DDG-1000, radar transition work for the second ship in the class, the DDG-1001, have consisted of “very minor” software integration work, Downey added.

Aside from radar work, program leaders have fixed the propulsion problems that have plagued the ship’s long-range weapons systems.

Navy leaders were forced to stop work on the Long-Range Land Attack Projectile, after serious flaws were discovered in the weapon’s design, Downey told USNI after his briefing Tuesday.

As a result, service engineers were forced to completely overhaul the weapon’s rockets to solve the propulsion problems, Downey said.

Since then, the weapon completed its guided flight tests in the fall and passed a series of live fire drills, designed to test the weapon’s capability in all weather and sea state conditions.

The next phase, according to Downey, is to conduct a soup-to-nuts test of the projectile and the entire weapon system during upcoming live-fire drills slated for later this year, he said.