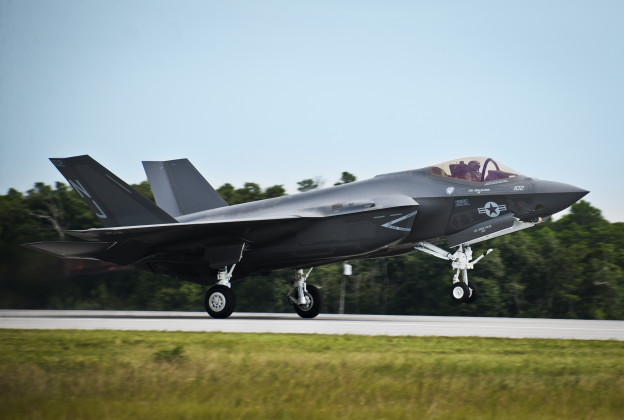 Lockheed Martin is set to deliver a production version of the tailhook for the carrier-based F-35C Joint Strike Fighter after an engineering glitch forced a partial redesign of the system.

“CF-3 is the test aircraft that is modified to conduct tailhook testing,” Lockheed spokeswoman Laura Siebert wrote in an email to USNI News on Dec. 12. “The airplane is in the final stages of preparation for test with the new tailhook module installed.”

“It will be ready for planned testing when the facilities at Lakehurst are ready,” Siebert said.
“In the interim, expect checkout flights at Pax River this month.”

Testing at Lakehurst is scheduled for January 2014 according to the F-35 program office spokesman Joe DellaVedova.

Roll-in testing is required to verify that the F-35C will be able catch a cable on a set of carrier arresting gear installed onshore at the Lakehurst facility. After the aircraft demonstrates that it can catch a wire on land, the F-35C will have to be tested at sea.

Arrested recoveries at sea should take place onboard the USS Nimitz (CVN-68) in the first part of 2014 according to Lockheed officials. However, while the current plan calls for the F-35 to perform its sea-trials onboard the Nimitz, it could be another ship depending on the availability of carriers at the time.

Demonstrating that the F-35C can recover onboard a carrier is critical for a naval aircraft. The tailhook has been a vexing problem on the F-35C variant when it was discovered in 2012 that the hook could not reliably engage an arresting wire.

Lockheed and the Joint Strike Fighter program office ultimately traced the problem back to the shape of the hook and a faulty wire dynamics model supplied by the Naval Air Systems Command.

The solution was to reshape the hook point and adjust the system’s hold-down damper, which helps prevent the hook from bouncing around upon touchdown.

Though publicly the Navy officials support the F-35C effort, many observers suspect that the service is less than fully supportive of the JSF program. However, the F-35C does have its backers—such as retired chief of naval operation Adm. Gary Roughead—who strongly supports the JSF variant because of the need to strike targets inside heavily defended airspace. Conventional non-stealthy designs are very vulnerable to the latest Russian and Chinese surface-to-air missile systems like the S-300 or S-400.

The Department of the Navy is set to acquire a total of 340 F-35Cs–260 of which would serve with the Navy while a further 80 would be allocated to the US Marine Corps. The Navy expects the F-35C to become operational in late 2018 or early 2019 with the full Block 3F capability.