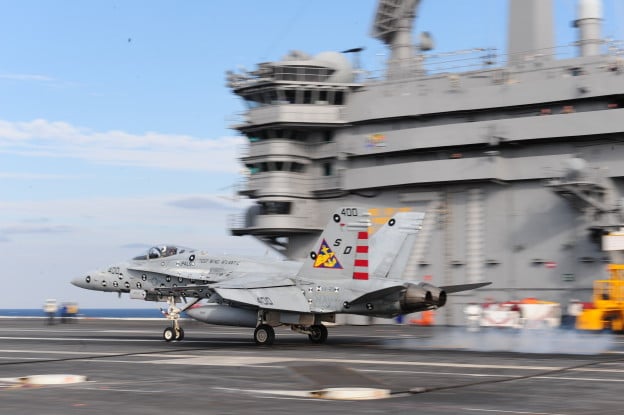 “The current Engineering and Manufacturing Development (EMD) effort was completed this month with the highly successful shipboard autoland testing on USS Theodore Roosevelt (CVN-71),” NAVAIR spokeswoman Marcia Hart said in a statement provided to USNI News. The core of the JPALS technology is an extremely precise ship-relative GPS-based system which is much more accurate than the existing pilot aids onboard the carrier.

For the Navy, the development of the JPALS is the huge step forward for integrating new aircraft into the carrier air wing. “Legacy systems cannot support UAS [Unmanned Air Systems], and [the Lockheed Martin Joint Strike Fighter] F-35 was designed with JPALS capabilities. JPALS Increment 1 is based on ship relative GPS technology,” Hart said.

While the initial development is now complete, the Navy still has work to do to finish all seven increments of the JPALS capability. The system will also eventually support flight operations onboard amphibious assault ships and U.S. Air Force airfields.

NAVAIR’s immediate focus however will be to continue developmental work for supporting the F-35C and unmanned aircraft onboard a carrier. JPALS is particularly important for the Unmanned Carrier Launched Airborne Surveillance and Strike (UCLASS) program.

While the Northrop Grumman X-47B Unmanned Combat Air System Demonstrator (UCAS-D) uses a similar prototype ship-relative GPS-based landing system technology, it is not the same system as an operationally deployable JPALS. “The program office continues development in support of the UCLASS and F-35 programs as well as multi-platform avionics integration,” Hart wrote.

The Navy will be the first service to field the new landing system on the F-35C. “Initial JPALS fielding is scheduled in support of F-35C first deployment,” Hart wrote. “However, sequestration and continuing resolution associated budget uncertainty will likely impact projected plans.”
Eventually, the USAF and the USMC will also use the JPALS for their operations.