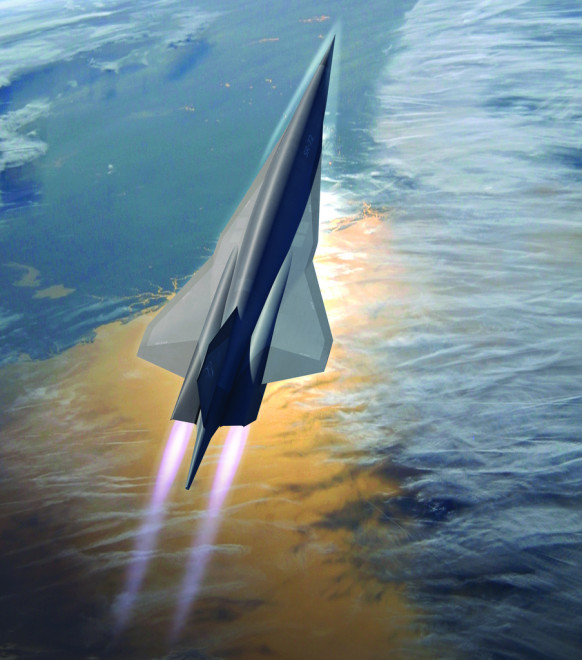 Lockheed Martin Skunk Works and Aerojet Rocketdyne have made a breakthrough in hypersonic propulsion technology, but the Mach 6.0-capable SR-72 remains more of aspiration than a real airplane.

The companies have found a way to pair a conventional turbine jet engine, such as those in existing fighter aircraft, with a supersonic combustion ramjet— an engine that can operate effectively only if an aircraft is traveling at very high speeds.

The pairing—first reported by Aviation Week on Friday—makes a hypersonic plane a practical possibility, but Lockheed still faces scores of technological and funding challenges before the so-called Son of Blackbird becomes a reality.

The breakthrough is in the “proprietary way we join up those two systems,” Bradley Leland, Lockheed Martin Skunk Work’s portfolio manager for air-breathing hypersonics, told USNI News in a Monday interview. “The turbine, which works well up to Mach 2, and the scramjet (supersonic combustion ramjet) work well at Mach 4 and above. By making those work together down at Mach 3—below Mach 3—that’s really the key.”

Unlike the previous generation SR-71s’ Pratt & Whitney J58 engines, which were a partial ramjet design, the new engine concept burns fuel at supersonic speeds—allowing it fly a lot faster. But it is also more technologically challenging.

“We’re looking at dual flow-paths, an over and under configuration,” Leland said.

The methodology to accomplish the transition between the turbines and scramjet was developed under the auspices of the Defense Advanced Research Projects Agency’s (DARPA) HTV-3X hypersonic aircraft demonstrator project. The project—also called the Blackswift program—ultimately failed because of the technological inability to develop an advanced turbine engine that could boost the aircraft up to Mach 4.

The cost to develop a large-scale high-mach turbine engine would be astronomical, Leland said.

So, five years ago engineers from Lockheed and Rocketdyne came together to work on a project that would use off-the-shelf fighter-sized turbine engines to accomplish the same task, affordably using many of the lessons learned from the HTV-3X program, Leland said.

The prospective engines currently under consideration are the Pratt & Whitney F100 and the General Electric F110. Those engines are limited to between Mach 2 and Mach 2.5, depending upon the air inlet. Lockheed and Rocketdyne’s solution removed that roadblock.

But the Lockheed-led effort has a long way to go before a demonstrator aircraft ever flies—much less an operational SR-72.

“Up until now we have spent a lot of company money on small-scale testing and some analysis,” Leland said. “In order to go forward into the next steps there would be a series of critical demonstrations of some large scale systems.”

One of those tests would be to directly connect a turbine engine with a scramjet to prove the concept works as expected, Leland said. That would take roughly three years. “That three-year phase would be beyond what we can fund on company money,” he said. “That would be a government-funded program.”

While the prospective government customers would be the U.S. Air Force and DARPA, Leland said Lockheed does not yet have a customer for the effort.

In order for the demonstrator to become a reality, a smaller version of the concept will need to be proved in the form of the Air Force Research Laboratory and DARPA’s High Speed Strike Weapon (HSSW).

“[HSSW] is important because we need to show some clear definitive successes in hypersonics to demonstrate that we can make the systems modest in size, modest in cost and not exotic,” Leland said. “I think that a successful flight testing of an affordable hypersonic vehicle in HSSW will be key to being able to proceed with the demonstrator aircraft.”

The missile is effectively a small-scale expendable version of the SR-72 air vehicle. The HSSW will be roughly the same size as Boeing’s X-51 supersonic combustion ramjet demonstrator and will draw upon much of accomplishments of that program.

“The first step on the roadmap to get to the operational hypersonic aircraft is really the [HSSW],” Leland said.

Lockheed hopes to launch the flight demonstrator program in 2018, he said. While the 2018 flight demonstrator is not currently funded and is more of a notional project at this time, he said the company has done a fair amount of design work on the aircraft.

“We have a very solid design for it,” he said. “But once again, you wouldn’t want to move forward with that aircraft design until you do the critical demonstrations to prove out the technology.”

The operational SR-72 would be a twin-scramjet design, which Lockheed hopes would become operational in 2030, Leland said.

It would be primarily geared toward the intelligence, surveillance and reconnaissance (ISR) mission, but would have a secondary strike role using a pair of HSSWs.

It could hit any target on any continent in less than an hour. Leland said it could be a prompt theatre-strike weapon with more than 1,000 nautical miles of penetration into denied airspace (when the range of the missile is added to that of the SR-72).

Stealth would be of limited value in an aircraft like the SR-72, given that radar absorbent materials would not survive the extreme temperatures. Moreover, the jet would have a huge infrared signature, which would negate most signature reduction measures. The aircraft might also leave a wake that might be tracked on radar—much like the SR-71.

Survivability would be achieved through a combination of speed, altitude and some limited signature reduction, Leland said.

An area of potential concern is weapons separation at such extreme speeds and altitudes. But Leland said that Lockheed has a lot of experience with high-speed stores separation, which it gained on the 1960s-era YF-12 interceptor program. The company also has more recent experience, but Leland did not elaborate. “It’s tricky, but we know how to do it,” Leland said.

The SR-72 would have range comparable to its SR-71 forbear—3,200 nautical miles.

Like its predecessor, it might use a more exotic fuel like JP-7. But Lockheed is examining the use of conventional fuels to simplify logistics and reduce operating costs. “There is the fuel from the SR-71, which would be very useful, called JP-7, but we are certainly looking at using more conventional fuels,” Leland said.

One of the biggest technical hurdles facing the SR-72 is thermal management—skin friction at Mach 6 is immense and generates incredible amounts of heat. There are two potential options to deal with the thermal stress of sustained high-speed flight: one is having a cold structure—similar to the tiles on space shuttles; the other option is a warm structure using materials like titanium.

Lockheed’s preferred option is the latter. As such the SR-72 would have a metal structure that would be allowed to heat-up, Leland said. “We have a lot of experience with high-temperature warm structures like the SR-71,” he said. “So we think that is very much achievable.”

Extreme temperatures also will likely require a cockpit buried deep inside its fuselage to shield the crew from intense heat. The pilot likely will control the aircraft via a sensor system — probably a form of electro-optical cameras. Under those extreme conditions, designing an environmental control system that can keep the crew alive and the avionics functioning is not an easy task. When the original SR-71 was designed, Lockheed had to practically invent an entirely new system to deal with the extreme environmental conditions.

The other option Lockheed could pursue is to make the SR-72 an unmanned aircraft — which is the route the company might be going.

Affordability is a key concern for Lockheed, which is why the company targeted a cruise speed of Mach 6. “That’s why we’ve been focusing on Mach 6,” Leland said. “If you start to fly much above Mach 6, you are forced to go into some pretty exotic materials to survive those temperatures.”

While Lockheed has not discussed its aspirations for the SR-72 in detail with the Air Force, Leland said that the company is aiming the design to overcome the vast distances of the Pacific theater. “Certainly, high-speed vehicles is one way to address the long distances involved,” he said, noting that the USAF hypersonics roadmap does call for an aircraft similar in concept to the SR-72.

But only time will tell if the Pentagon has the financial wherewithal to fund Lockheed’s dreams of the SR-72, even if the Defense Department wants such an aircraft.